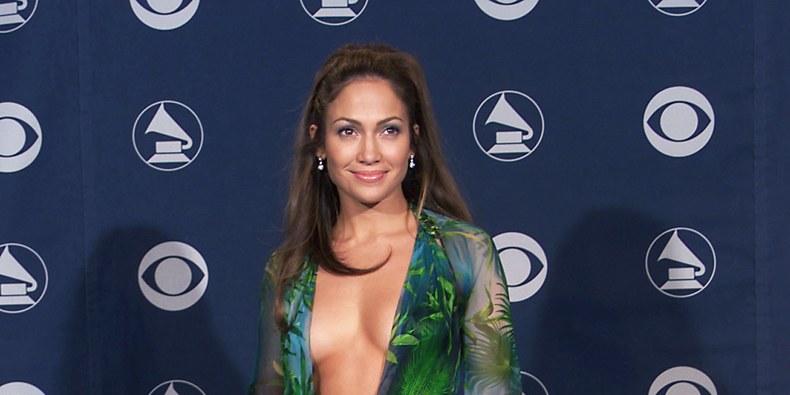 It’s hard to believe that it’s been 20 years since Jennifer Lopez obliterated the 2000 Grammy Awards red carpet with that dress. But alas, here we are. Jennifer Lopez is still a star, Google image search is still a thing, and that green jungle print gown made of silk chiffon is still one of the most iconic red carpet look of the last two decades (yes, it has its own Wikipedia page).

To help commemorate the anniversary, Versace and sneaker store Concepts have teamed up on a limited edition sneaker directly inspired by J-Lo’s look. The chunky shoes feature the same jade green that made the dress such a standout, as well as a tanned tongue that’s meant to resemble the plunging neckline that sent the entire internet into a frenzy.

As the New York Post points out, the dress is actually responsible for the birth of Google Image Search. “At the time, [Lopez’s dress] was the most popular search query we had ever seen, Google executive chairman Eric Schmidt said in 2015.”But we had no surefire way of getting users exactly what they wanted — J.Lo wearing that dress. Google Image Search was born.”

But as Lopez recently revealed in a video titled "Moments of Fashion,” the mythical moment almost didn’t happen. According to her, she was filming The Wedding Planner with Matthew McConaughey “in the middle of nowhere,” when her stylist showed up the day before the Grammys with nothing for her famous client to wear. Eventually, she presented Lopez with two options, one being the infamous Versace gown. Unfortunately, it had already been worn in public three times prior, once by Donatella Versace herself. In the end, Lopez decided to take the plunge (pun very intended), and the rest, as they say, is history.