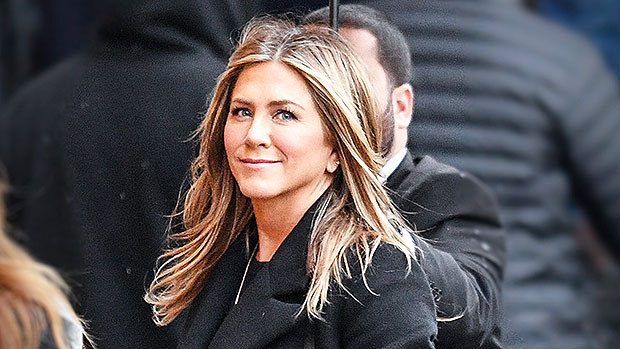 If you need some style inspo this season, just look to Jennifer Aniston. The actress flawlessly pulled off a pair of sleek leather pants on Dec. 5. See the sexy pics!

Jennifer Aniston, 49, is absolutely slaying her fall fashion looks. The actress stepped out in a pair of skintight leather pants on Dec. 5, and was looking so confident! The snug trousers clung to her every curve, and while Jennifer displayed a warm smile on her face, she looked bad to the bone in her leather number! The flawless style choice was worn for her pre-taped appearance on Jimmy Kimmel Live, and it was the perfect choice for the dropping December temps. As she hit the streets, Jennifer was absolutely glowing, and looked years younger than her age!

The actress chose to pair her edgy pants with a simple black tee, which she covered with a floor-length peacoat of the same color. She kept her avant-garde look going with a pair of purple combat boots on her feet, which added just a small pop of color. The minimalist fashion maven accessorized with a simple black cross-body bag, and a silver pendant necklace. The Friends star wore her tresses down, and letting it blow in the wind as she walked.

Jennifer’s interview with Jimmy that day was insightful, to say the least. During the chat, the actress hilariously revealed that Jimmy’s four-year-old daughter once used her backyard as a bathroom, and her family had to clean it up! When the talk show host took the liberty of suggesting Jennifer switch up her famous Friendsgiving meal next year, she spat back.”Listen, I’ll make a deal. If we do this, can we talk about your children not using my backyard as a bathroom?” she replied. “That did happen, and you know what, a year went by and I didn’t know about it.” Yep, she went there!

Jennifer’s flawless fall fashion isn’t the only thing she’s got going for her! The star is set to appear in the highly anticipated Netflix film, Dumpin’, dropping Dec. 7! The film follows Dumplin’ (Danielle Macdonald), the plus-size, teenage daughter of a former beauty queen (Jennifer), who signs up for her mom’s pageant as a protest that escalates when other contestants follow her footsteps, revolutionizing the pageant and their small Texas town. After seeing the trailer, this looks like one flick that is not to be missed!