Now lives: In a two-bedroom apartment in the Williamsburg neighborhood of Brooklyn.

Claim to fame: Mr. DeSantis is one-third of the Manscapers, a landscape design firm in Brooklyn with an eclectic clientele drawn from the city’s cultural fauna. Along with his longtime pals Garrett Magee and Melissa Brasier, Mr. DeSantis has created eye-popping green environments for Diane von Furstenberg, the David Lynch Foundation, Calvin Klein and Sies Marjan. “I’ve found clients at low tea on Fire Island and even through teaching yoga classes,” he said.

Big break: The Manscapers took root in 2014 after friends complimented the outdoor décor at a party Mr. DeSantis and Ms. Brasier held at their Williamsburg apartment. An early client was Ladyfag, a night life personality who hired them in 2015 to create a tropical theme for a Dsquared2 party at the Halston House on the Upper East Side.

Their green thumbs have since graced Ralph Lauren’s coffee shop, where they created an English garden with boxwoods and ivy, and a book party at the Public Hotel for the fashion photographers Mert and Marcus. “Madonna and Kim Kardashian saw our work, so we can die now,” Mr. DeSantis said. 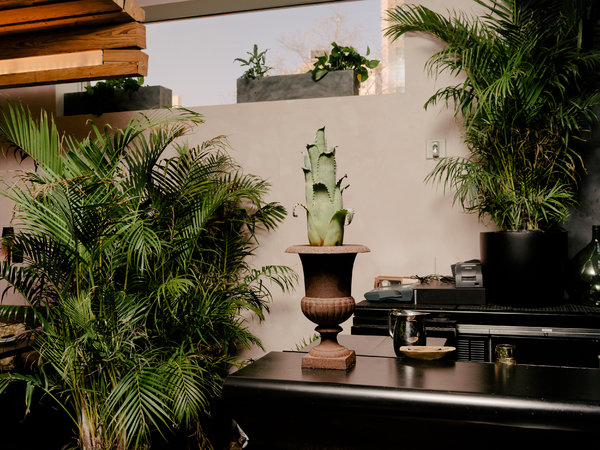 Latest project: “Backyard Envy,” a reality makeover show on Bravo that follows the three plantfluencers as they rake and hoe for clients including the Hotel Americano and Chris Beltzer, a fashion director at InStyle, just had its premiere. The premise of the series: a home-flipping format for cramped urban oases with occasional quips about Grindr.

“We were shocked by how much creative control we had,” Mr. DeSantis said. “When we wanted our jacked gay workers to show off, the producers would immediately let us go for it.”

Next thing: The Manscapers plan to sell a line of outdoor candles and high-end bug repellents within the year. Mr. DeSantis also hopes to use his platform as a budding television personality to shed light on one of his concerns: male body issues.

“I plan to be open about my experiences and show men can be just as insecure as women, especially when we don’t follow the norm of what the perfect male body should look like,” he said.

Impostor syndrome: Mr. DeSantis said that being raised by conservative Syrian parents has given him an outsider’s perspective that helps him adapt to new situations. “There has always been an element of me faking it till I make it,” he said.