LONDON — In the British capital, it is the calm before the storm. The country’s scheduled departure from the European Union — Brexit — is mere weeks away, although no deal has been reached. And so little is clear about what will become of Britain in the wake of its decision to “Leave” that many people seem resigned to the uncertainty of the moment. There is a tempest bearing down. But until then?

Until then, it is London Fashion Week, which wrapped up its biannual round on Tuesday.

Fashion is a multibillion-dollar industry in Britain, and a global one: It can neither afford to grind to a halt for Brexit nor afford to ignore it. 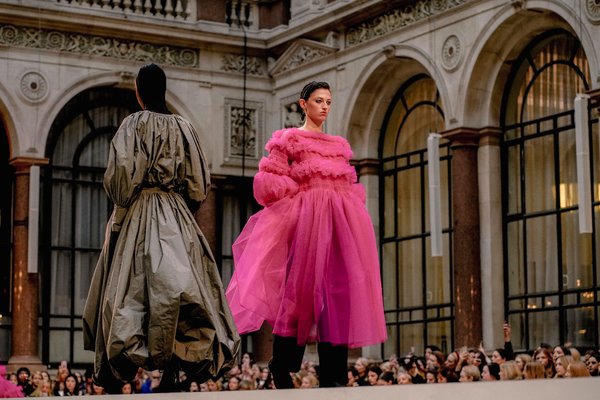 “There’s nothing we can really do,” Molly Goddard said after her show in answer to the inevitable questions. “We have a lot of European partners but beyond that I don’t really know.” Ms. Goddard’s signature are many-tiered tulle dresses, candy-pink confections that can each require 200 feet or more of fabric — the lady as layer cake — but this season she showed them undergirded with trousers and boots beneath, and balaclavas above. “Everything was meant to be stomped in,” she said.

Like the Boy Scouts say: Be prepared. Ms. Goddard, whose dresses can look princess-y, has always understood that there is no inherent contradiction between sweetness and strength. Not for nothing is one of her most famous customers Villanelle, the deadly assassin in “Killing Eve.” (Never mind that Villanelle’s fictional.)

It is unfair to demand that designers reflect the politics of the moment in their work, and unfair to ask them to be spokespeople for the decisions of government ministers. Yet the question bubbled up again and again over the course of five days in London, in the backstage scrums where they faced the press and explained their work: “Don’t you hate Brexit?” said a voice from the crowd that was facing down Riccardo Tisci, Burberry’s chief creative officer, on Sunday under the hot, sharp glare of the lights at the Tate Modern following his second show for the brand.

“I cannot answer,” Mr. Tisci said. “Everyone has a different opinion, of course.”

But he had called his show “Tempest.” And he had just finished opining that “we need the younger generation to be more free, and express themselves.” He felt there had been greater freedom 20 years earlier, when he was studying at Central St. Martins. But two days before, London schoolchildren had skived off classes — Americans call it “cutting,” but the Britishism really captures the sense better — to noisily protest inaction on climate change in the streets. It seemed Mr. Tisci was the less-free one, practicing the diplomatic parry of the corporate steward.

He has, after all, a behemoth to consider. Burberry aspires to be all things to all people, and Mr. Tisci ticked off the strength he felt the label “deserves to have”: not only fashion, but accessories, evening wear, streetwear, underwear, expensive clothes, affordable clothes. (All things being relative: Burberry T-shirts, like the one Mr. Tisci was wearing, can cost $390.)

With a remit that broad, it only makes sense that he based his collection on the idea of “including, not excluding things.” In the Tate, he divided his show space into two: one room, concrete, grimly lit, with chain-link fence; the other a kind of private theater with gleaming wood and cushioned seats. The tough and the posh.

He divided the collection along the same lines. There was a streetwear section of rugby shirts and puffers, trainers and track pants. Then came the bourgeois: the good old Burberry trench, fluty dresses, trailing scarves. (It would be nearly impossible to mistake one for the other, but if, say, you were viewing from space, the hair was the tell: gorgeous, elaborate curlicues more or less tattooed to the models’ foreheads for the street; sober, severe buns for the rest, snug in their own little nets.)

It had more sharpness and more bite than Mr. Tisci’s first collection for Burberry, which was washed-out in a medley of dutiful beige. But it nevertheless had more of the attitudes of aggression (familiar to Mr. Tisci’s fans from his years at Givenchy) than real snap. For all its enormous breadth, it felt more styled than meant, a tempest that would fit neatly in a teapot.

Mr. Tisci played with references of Cool Britannia, rave and chav (British for lout), and the vaunted DNA of Burberry — a word fashion executives love to use, in an eerily eugenic way. But the effort to be everything to everyone is enervating, and no doubt exhausting. It’s no secret in the industry that “lifestyle” is the lifeblood of the business: Those that can’t afford or can’t wear luxury runway fashion have to be invited in with a T-shirt, a boxer brief, a perfume, a handbag, a keychain. But is that effort killing fashion?

It’s not Mr. Tisci’s fault that fashion has grown so giant. Lifestyle is the general ambition.

It is clearly Victoria Beckham’s. But then, she’s already a lifestyle. Ms. Beckham is an icon in a truer sense of the word than is usually meant by the term’s constant invocation — images of her are studied and revered — and she has built up a line offering women a way to dress like her.

This fall, after a trial run with Estée Lauder, she intends to introduce her own makeup collection. And at a preview at her studio in West London a few days before her show, she said that skin care will follow after that.

So when a bright red she called “lipstick red” rippled through the collection, you got what she was gesturing at. But it went down gently because Ms. Beckham delivered a collection, on a sunny Sunday morning at the Tate Britain, that was focused, appealing and, most importantly, real: suits and nipped-waist blazers, slouchy trousers and longish skirts, dresses and coats and muzzy knits that women could wear. Not only “out” but in: Into the office, into the lunch meeting, into the Tube.

“We know my customer,” Ms. Beckham said, and for a change, you believed it.

Fantasy predominates at fashion week, often fabulously so. When Joan Collins finally comes scampering into an Erdem show half an hour past its scheduled start gasping, “I was stuck in the lift!”, you pinch yourself. Is this a dream? When Christopher Kane designs a collection around balloon fetishists and latex kinksters, “looners” and “rubberists,” you pinch yourself — or worse. (I’m not here to judge.)

But throughout London, the strongest impressions were made by clothes that seemed destined to go farther than the runway and Instagram, more life than lifestyle. No disrespect to the palliative power of fantasy but, with tempests on the horizon, the real way may be the wise way.

Away from the hamster wheel of hype are designers who have been working away steadily for decades, artists of the small detail and subtle tweak. Margaret Howell is one of those: After more than 40 years in business, she remains so discreet and so untroubled by the need for acclaim that you could spot her (if you could spot her) casually chatting, unrecognized, in the stairwell to her show space as dozens of guests there to see her show streamed obliviously past. But her collection was filled with pieces you would be glad to own, their proportions ever so slightly improved. Hussein Chalayan, who celebrates his 25th anniversary in business this year, is another: He has a wonderful way of reworking something you know — a white shirt, an unstructured blazer — into something recognizable but new, so you see it fresh.

Real women, real clothes. They were there at Simone Rocha, whose show was all the more affecting for its casting of models of different ages and different sizes, just as her real clients are. When Chloë Sevigny came ambling down the runway, smiling, it didn’t feel like a stunt, any more than when Jeny Howorth or Jade Parfitt or Tess McMillan followed. Ms. Rocha’s collection has a place for them all.

And real clothes were at J.W. Anderson, who often strays into hinterlands of the esoteric. He didn’t here, although he also didn’t dull himself into normalcy either. Jonathan Anderson said he wanted to “take the noise out and focus on clothing,” and the collection was a reminder that he can: That behind the theatrics and the riddles that sometimes dog his efforts are often very good clothes. Here they were on dazzling display, in particular, his beautiful wrap coats and puddling trousers.

It’s tempting to think of Mr. Anderson floating above it all, especially when he said that he had designed his set, with its little rocks poking out of cream-colored carpet to suggest mountaintops poking through the clouds — as if his models were sailing over the sky, safe from the storm. But this was a much more grounded collection for Mr. Anderson, and all the better for it.

“Shows like that put me in a good mood,” Sidney Toledano, the chairman and chief executive of the LVMH Fashion Group, a minority stakeholder in the brand, whispered to Mr. Anderson.

Little else at the moment may be clear but this: I felt the same.