A community of New Yorkers has formed around controlled, costumed combat. 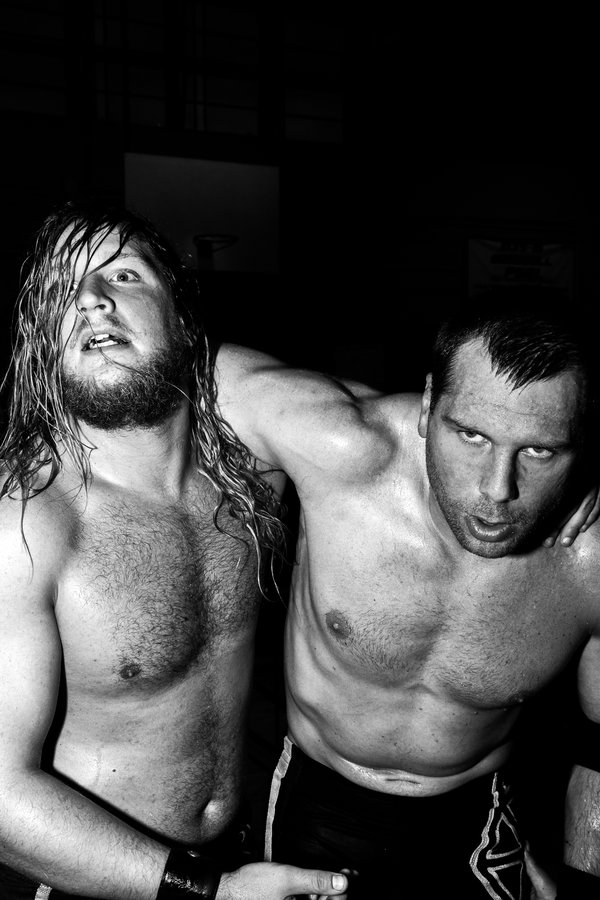 By day, Jake Gomez works as a special-education teacher in Downtown Brooklyn. But on a Friday evening in June, the stocky, mohawked 31-year-old was professionally elbow-dropping opponents in the ring. Within the cinder-block recreation center of Most Precious Blood Church in the Bath Beach section of Brooklyn, he was Logan Black, the King of Chaos.

Mr. Gomez is part of New York’s underground wrestling scene, a D.I.Y. community of performers, referees, managers and fans who embrace the violent pageantry of a sport usually seen on pay-per-view or in arenas.

For a few hours a week, they congregate in gyms, nightclubs and social clubs to perform under the guises of brutish and flamboyant personae, before returning to their otherwise routine lives.

“We’re all having fun and enjoying doing this,” Mr. Gomez said. “The outlet is being in the ring and being able to express the superhero inside you.”

The space was filled for the fourth anniversary of Five Borough Wrestling, a promotional company that hosts monthly events at community centers in Brooklyn. Hours before the show, dozens of wrestlers, many of whom were just there to network, perspired in the empty gym, chatting and thumbing at their phones.

The cohort included 26 performers, some beefy and towering, others sinewy and short. There was a menagerie of beards, man buns and goatees. One man fumbled around with a blunt ax.

Troy Thompson, the 26-year-old co-founder of Five Borough Wrestling, described his selection process for booking wrestlers. “For me, it’s always the body,” he said, dressed in a Tommy Hilfiger shirt and pink shorts. “If you look larger than life, I’m going to like you.”

The ring apparatus arrived in a box truck minutes before the doors were scheduled to open. Wrestlers rushed to unload wooden beams and foam pads. The metal skeleton was assembled in the center circle of the basketball court. Backstage, a mint green church office with a hanging crucifix became a sweaty, cologne-laced locker room, with performers choreographing their moves and changing into costumes.

The performers were giddy, supportive and almost nerdy — more LARP-er than jock. A lanky, 27-year-old wrestler who performs as Cajun Crawdad pulled on a crustacean outfit with a red and orange mask.

“There’s seaweed and antennae things,” he said. “It’s terrible to breathe in.” Though his stage name may suggest otherwise, Crawdad is from Linden, N.J., and works at a gelato shop. “My tag team partner is a hermit crab,” he said.

Nearby, Pyro Pulse and the Iceberg Joe, two brothers from Staten Island who wrestle together as the Elements, showed off $400 custom leather luchador masks. Pyro Pulse, who is 30 and works as a screen printer, said his mask had to be broken in. “It’s like a baseball mitt,” he said. “But I didn’t put it in the oven or nothing.”

Outside, fans clutching hot dogs and beers piled into folding chairs (front-row tickets cost $30, general admission was $20). The show began. Wrestlers snarled and preened as they entered the ring to theme music, then thunderously slammed each other to the canvas, careened off the ropes and moaned in submission holds.

Some spat liquid into the audience or encouraged spectators to slap the exposed chests of their chicken-winged opponents.

Billy Caputo, a retired professional wrestling referee who in his heyday shared the ring with Hulk Hogan and Andre the Giant, was there on behalf of the New York State Athletic Commission. “I watch the crowd all night long,” Mr. Caputo, 70, said. “Have a good time, but don’t get involved in an overbearing way.”

The night’s main event was a match between JT Dunn and David Starr, two of the more notable names on the bill. Their grueling bout ended with the wrestlers slumped in the ring, respectfully sharing bottled water.

Mr. Dunn, a 28-year-old from Providence, R.I., has wrestled full-time for the last four years. He knows that a tryout with World Wrestling Entertainment could advance his career, but the sport has already elevated him emotionally.

“Pro wrestling was really the thing that took me out of the darkness,” Mr. Dunn said in the raspy, rapid cadence of a carnival barker. Seven years ago he was addicted to painkillers, and he reached a breaking point when he overdosed.

“I needed to get my life together,” Mr. Dunn said. “It sucked because a lot of my friends didn’t take me seriously. They thought pro wrestling in my life was a joke.”

Most wrestlers in the underground community revel in the freedom of temporary shape-shifting. Ian Fried, who performs as Orion Dove, wore fluffy white boots, struck effete poses and used an enormous henchman to do his dirty work. Fans reviled him.

“It’s more fun to be a bad guy,” said Mr. Fried, who works in communications at Vice. “If I want to call a guy in the front row a piece of trash, I can.”

The referees are performers, too: Their charade involves faux impartiality and selective blindness. “And it’s the best seat in the house,” said Rob Blatt, who oversees several matches a month. He is the director of audience at Observer and has trained as a sideshow performer and a competitive eater.

“It’s a matter of not letting this overwhelm the rest of my life,” Mr. Blatt said. “My wife hates it.”

During intermission, spectators browsed the merchandise offerings, which included T-shirts and autographed photos. Some performers make as little as $20 a show, and cultivating fans can be essential to their continued participation.

Anthony Greene, who wrestles as “Retrosexual Anthony Greene,” stood behind a folding table displaying stickers and sunglasses. The 24-year-old wrestler peddled fake mustaches, which looked somewhat like his own, for $5. “I only have one left, so I did pretty good,” he said. Mr. Greene is sponsored by Zubaz, a company that sells zebra-striped clothing.

Most of the attendees were from Brooklyn and Staten Island. A few regulars on the circuit were familiar with the signature moves and celebratory rituals of the performers.

“I love the characters, the creativity,” said Nova Gray, a 21-year-old who had traveled from Baltimore for the event. “Wrestling brings people together.” Soon she raced off to pose for photos with combatants.

There were only men on the bill at the Five Boroughs event, though the underground wrestling scene includes a small but growing number of women performers.

“You have to go even harder than usual to prove that you can be just as good if not better than the guys,” said Kristen Stadtlander, a 23-year-old wrestler from Long Island who performs in alien makeup.

After the show, wrestlers mingled with fans as the ring was deconstructed and reloaded into the truck. The mutual appreciation was palpable; everyone was an insider among outsiders.

“This was never something I thought I’d be able to do,” said Alex Abakulov, who wrestles as A.J. Spectre and studies osteopathic medicine. “I was this out-of-shape foreign kid who grew up poor and always got made fun of. I didn’t expect that I’d be performing in front of anybody. Every show is a gift.”

Devin Yalkin is a photographer and a lifelong New Yorker. Ben Detrick is a writer in New York.