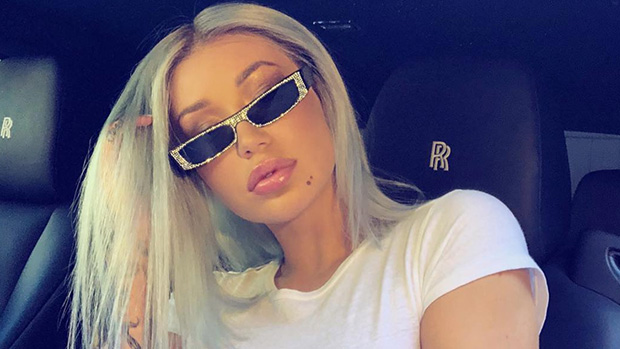 Who needs to wear clothes while eating anyway, right!? Iggy Azalea looks super hot in a new Instagram pic, wearing next to nothing while chowing down on some pizza. Check it out here!

Iggy Azalea has really been heating up social media these days, and she was at it again on Oct. 25! The Australian rapper took to Instagram to share a photo of herself eating some pizza…while wearing nothing but a lacy red bra and matching panties, of course. Along with the sexy ensemble, she’s also rockin’ a pink wig — maybe she’s coming from a photo shoot or something!? Or, you know, maybe this is just how she hangs out around her house on a daily basis…you never know!

Either way, she looks amazing, and fans took notice. The comments section of Iggy’s post is flooded with raving messages over how great she looks, along with fire emojis to really emphasize the point. “Literally perfect,” one person wrote, while another added, “Thanks for the hot pic Iggy.” This came after a previous post from the 28-year-old, in which she showed off a much plumper pout and tighter face than usual. Fans had nothing but amazing things to say about her new look, though, and were raving in the comments of that pic, too!

Iggy has been open about having plastic surgery in the past — she’s admitted to getting a nose job and having her boobs done — and a plastic surgeon told HollywoodLife EXCLUSIVELY that it looks like she’s gone on to have even more work done recently. Dr. Daniel Barrett, who is board-certified as a plastic surgeon in Beverly Hills, said it appears that Iggy has “fuller lips, heightened brows and a sculpted face,” in her new pics, as well as a “slimmer jawline and smaller nose.”

Iggy has not confirmed whether or not she got anything else done on her face, but whatever she’s doing, the fans are definitely feeling it! Keeping bringing on the sexy selfies, Iggy!