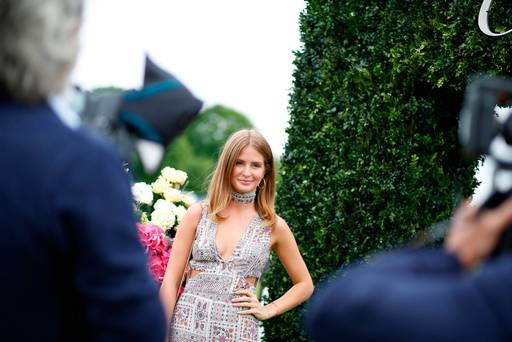 A spokesperson for Millie Mackintosh has responded to claims by swimwear designer Virginia Macari that the money owed to her was “not very much at all”.

Ms Macari, an Italian-Irish swimwear designer who rose to fame on Dublin Wives in 2012, now lives in Marbella where she runs her eponymous swimwear line. Earlier this week, former Made in Chelsea star Millie, Hannah Saunders, an Irish PR who runs her own agency in London and stylist Courtney Smith, said they are collectively owed €25,000 for their work in putting together a fashion show in April.

In a Sunday newspaper, Ms Macari responded to their claims and cited the collapse of Ms Mackintosh’s fashion business, trading under Cammac Trading Ltd, which went into liquidation in May, losing £178,000 (approx €198,000) of the £548,000 (€610,000) the company owed. She said that money is owed, but the amount is not as high as they are stating. She said that “being picked on like this is totally unfair.”

“I think she is very professional and everything, but it is terrible that her business collapsed and that she owes more than £500,000 to her creditors,” Macari said. “Honestly, what’s been written about me is such a small percentage of what she owes to her creditors. I wouldn’t be able to sleep at night if I owed that kind of money. She has been paid by me and it’s been disputed. I am taking legal representation and advice over it.” “Millie liquidated her company, owing all her creditors. I would never do something like that. I take full responsibility for any money owed in my company, which is not that much at all.”

In response, Donna Rooney, who represents Mackintosh, told Independent.ie: “If it’s such a small amount, then pay. Cammac Trading Ltd going into liquidation has nothing to do with anything.

“We’ve never claimed we’ve never had any payment. To date, 7% has been settled with no further commitment made to the remaining amount. The contract with Virginia is with Donna Management on behalf of the services of my client that I represent. It’s not her bringing the claim forward, it’s me.”

Ms Saunders, who handled the PR for the event in question, a fashion show showcasing the new collection for V by Virginia Macari, said she was disheartened that Ms Macari was deemed the amount so small.

“As a small business owner, every invoice counts no matter how big or small it is,”she told Independent.ie. “I’m saddened to learn she considers these payments owed to be minimal, for me they’re substantial. I hope that nobody else is put in this position, and I hope that by informing people of our situation we will protect people in the future.”

Similarly, Courtney Smith, one of Ireland’s top stylists, also worked on the event and said they have been communicating with Ms Macari’s representatives for a number of months. “Millie is a celebrity and that gets headlines and Virginia largely spoke about Millie in that article, but there’s two other people involved and we’re both self-employed. While our amounts are smaller, they’re not small to us. This has dragged on for nine months,” she told Independent.ie.

Ms Smith said she agreed to a payment plan, but was not paid after the first installment.

“In that article, she says she’s having a big show in April in Los Angeles, but she can’t pay people for the last show she did.”

Ms Macari said in the Sunday article that she “can’t believe there are people who are trying to destroy my reputation and ruin my business name over so little and making false allegations”.