The 27-year-old, from Lancaster, suffered an unexplained placental abruption at 29 weeks and was rushed in for a C-section on June 21. Jessica tragically died but her twin sister Bella survived. 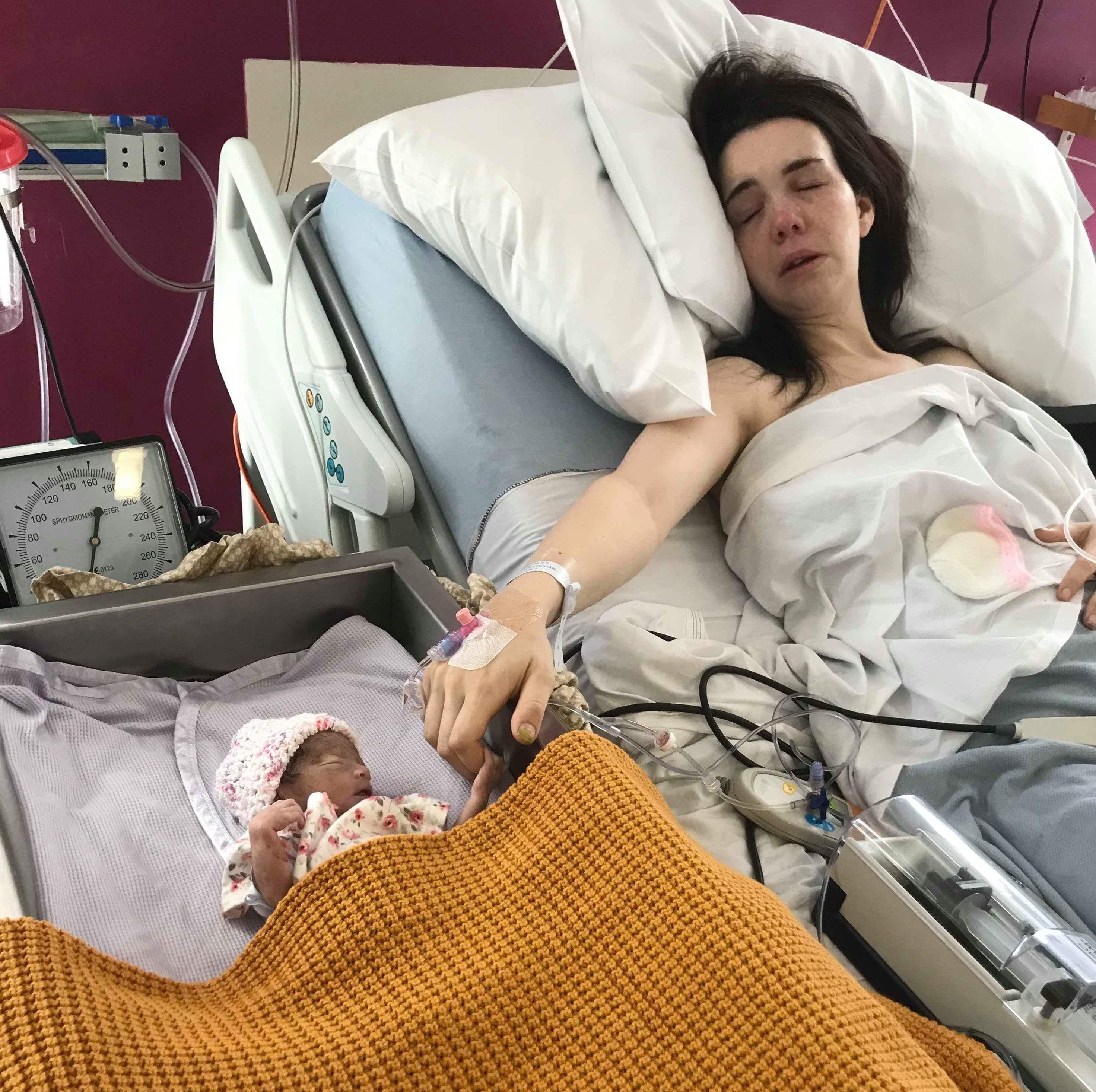 Emma cared for her stillborn daughter for two weeks, taking her for walks in the pram, singing her nursery rhymes and rubbing lotion on her skin.

As soon as I met my daughter, Jess, I felt an instant rush of love. I didn’t want to let her go. I held her close and felt her skin next to mine. It was really peaceful. Except for one thing – she was dead.

Jess – who has an identical twin, Bella – was stillborn at 29 weeks after a high-risk pregnancy, a result of me having a bicomulate or heart-shaped womb, which affects the way the baby lies in later pregnancy and increases the risk of premature births. 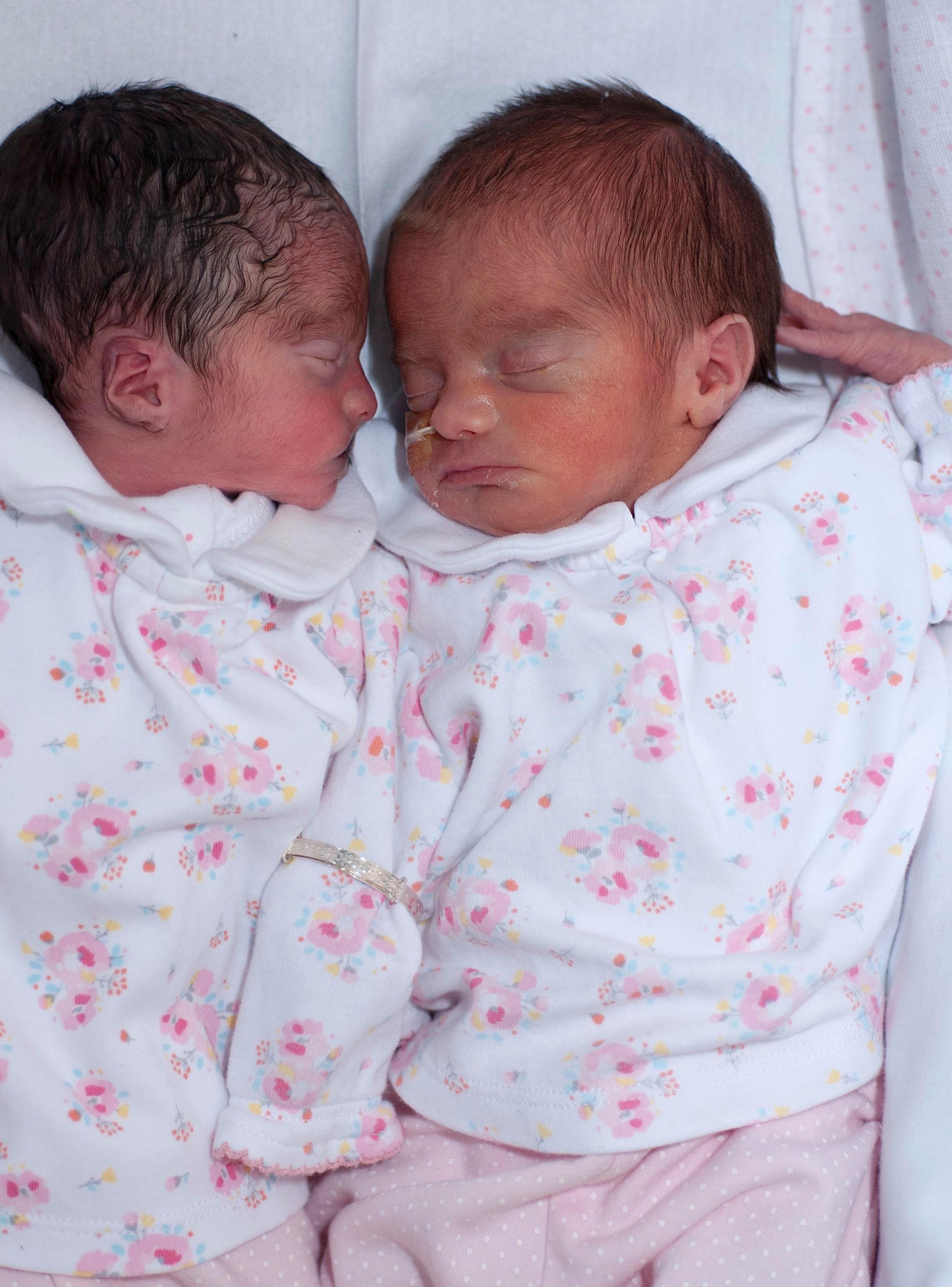 In dying Jess saved her sister’s life. She will always be my heroine.

I was monitored heavily throughout my pregnancy, as both Jack and Mikey arrived prematurely. Just two weeks before Jess died a scan confirmed the twins were healthy.

But after bleeding suddenly at home, I was rushed to the Royal Lancaster Infirmary where it was feared I had suffered a placental abruption where the placenta pulls away from the baby.

It's incredibly dangerous and treated as an emergency – but sometimes happens for no reason. 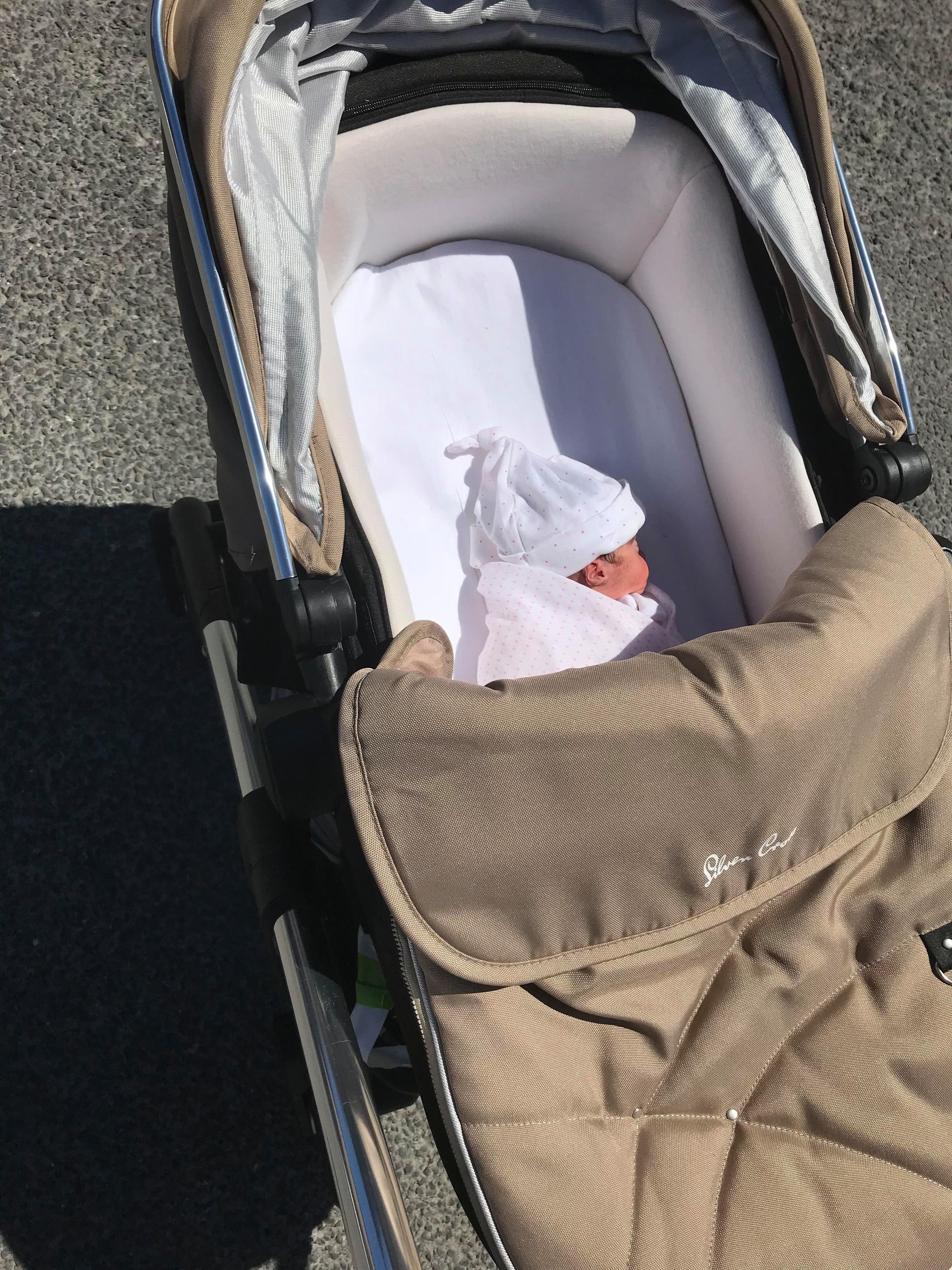 Bella was saved and taken straight down to  neo-natal intensive care but there was no hope for Jess. Despite everyone’s best efforts she’d died in my womb. No-one was to blame, it was just bad luck.

I didn’t realise at first as I was confused as a result of the birth and groggy from the local anaesthetic. But still I’ll never forget my husband telling me the good and bad news.

That we had one daughter but another one who had died.

I felt a rush of shock and sickness but then – as she was put in my arms – a wave of peace. And instant, immediate, love.

I knew that Bella would survive and I would have the whole of my life to care for her. So I focussed all my love and attention on my little Jess.

For 12 hours in the delivery suite Paul and I sat with our darling, perfect girl, taking in every inch of her. 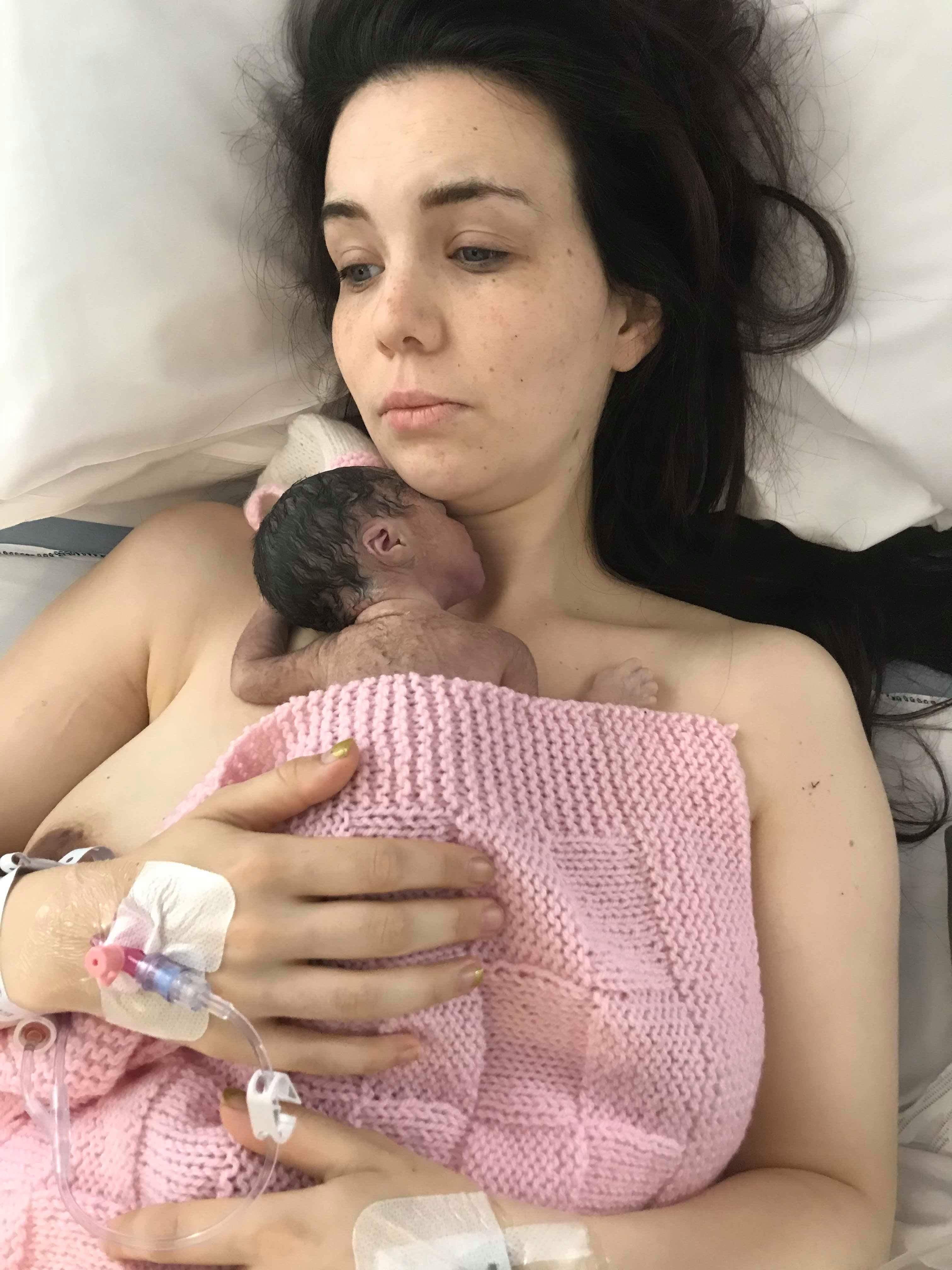 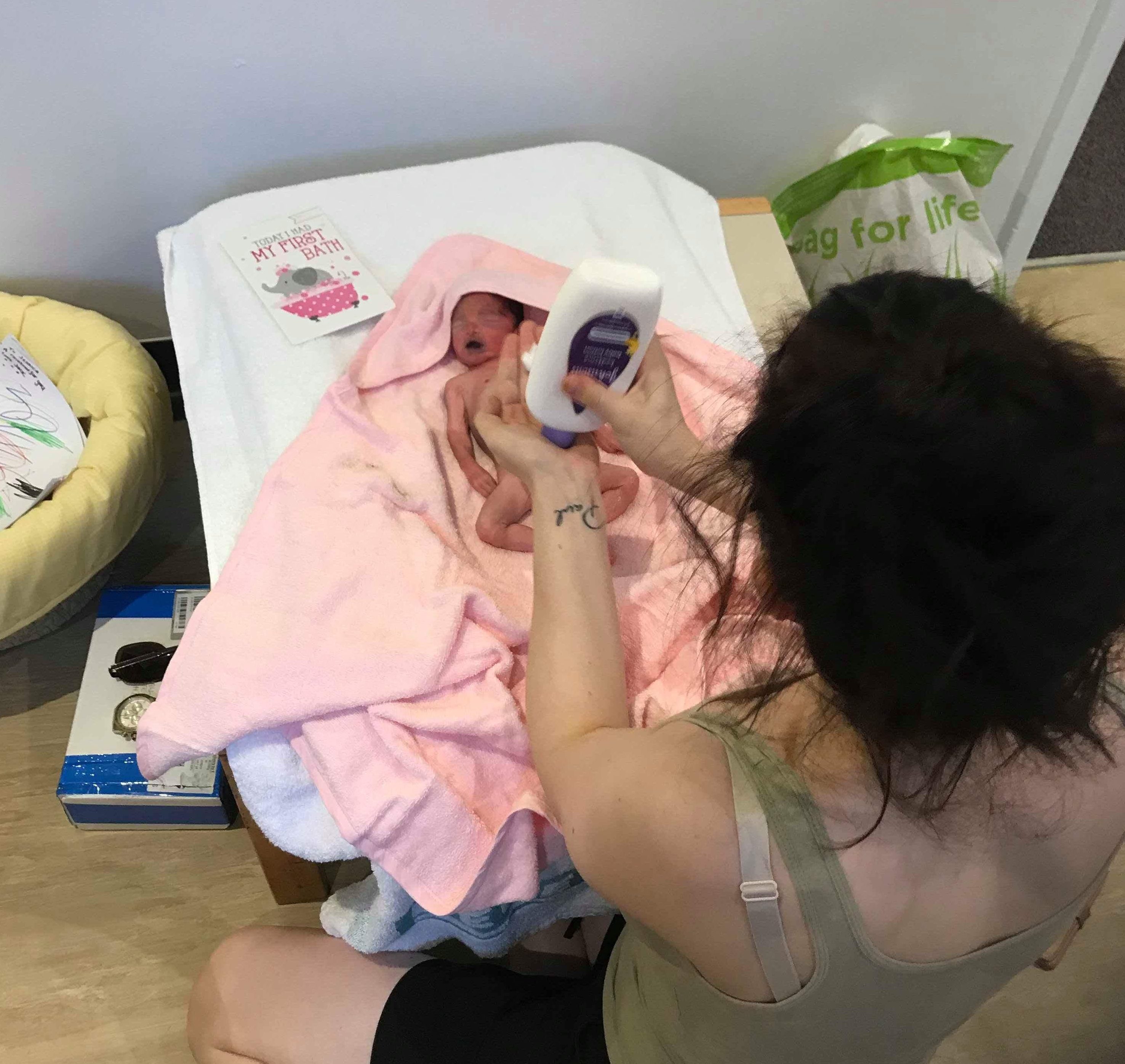 Then her lips started to darken and turn blue so doctors told me about a thing called a Cuddle Cot – a refrigerated cot – where babies who are stillborn can be kept cool.

She was taken to the cot in a private room, away from the cries of other newborns, and gradually her cheeks returned to a pink colour.

It was wonderful to see her as she should have been had things been different.

The other children came to see her. We’d explained to them she had died and asked staff what we should tell them about her still being there, but silent.

They said to let them deal with it in their own way. So the kids played around Jess, chatting away to her as if she was alive.

The younger ones pushed toys on the floor and stroked her cheeks while Jack, who understood what being dead meant, was more gentle. ‘She’s in heaven,’ he told me and it meant so much. 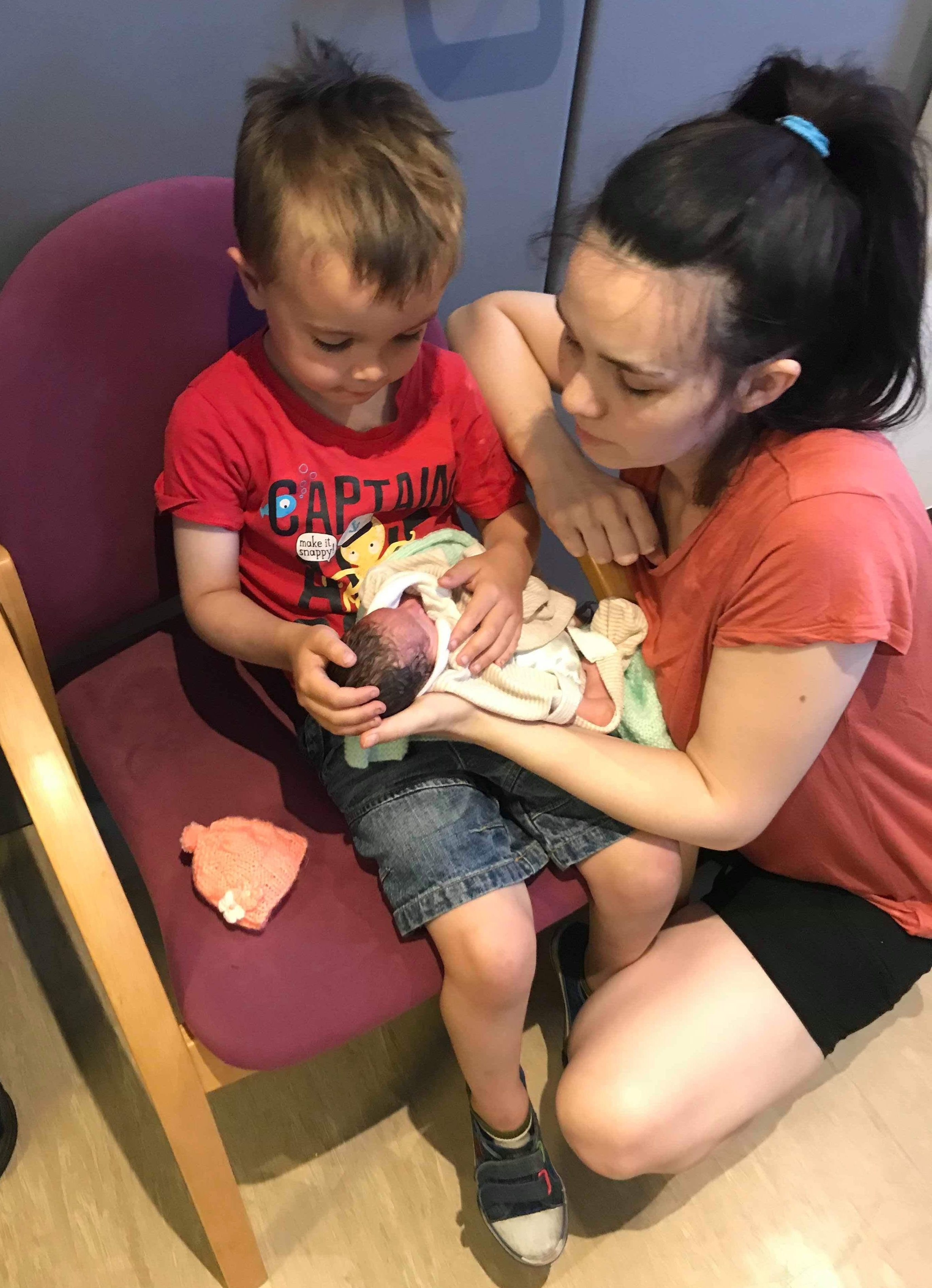 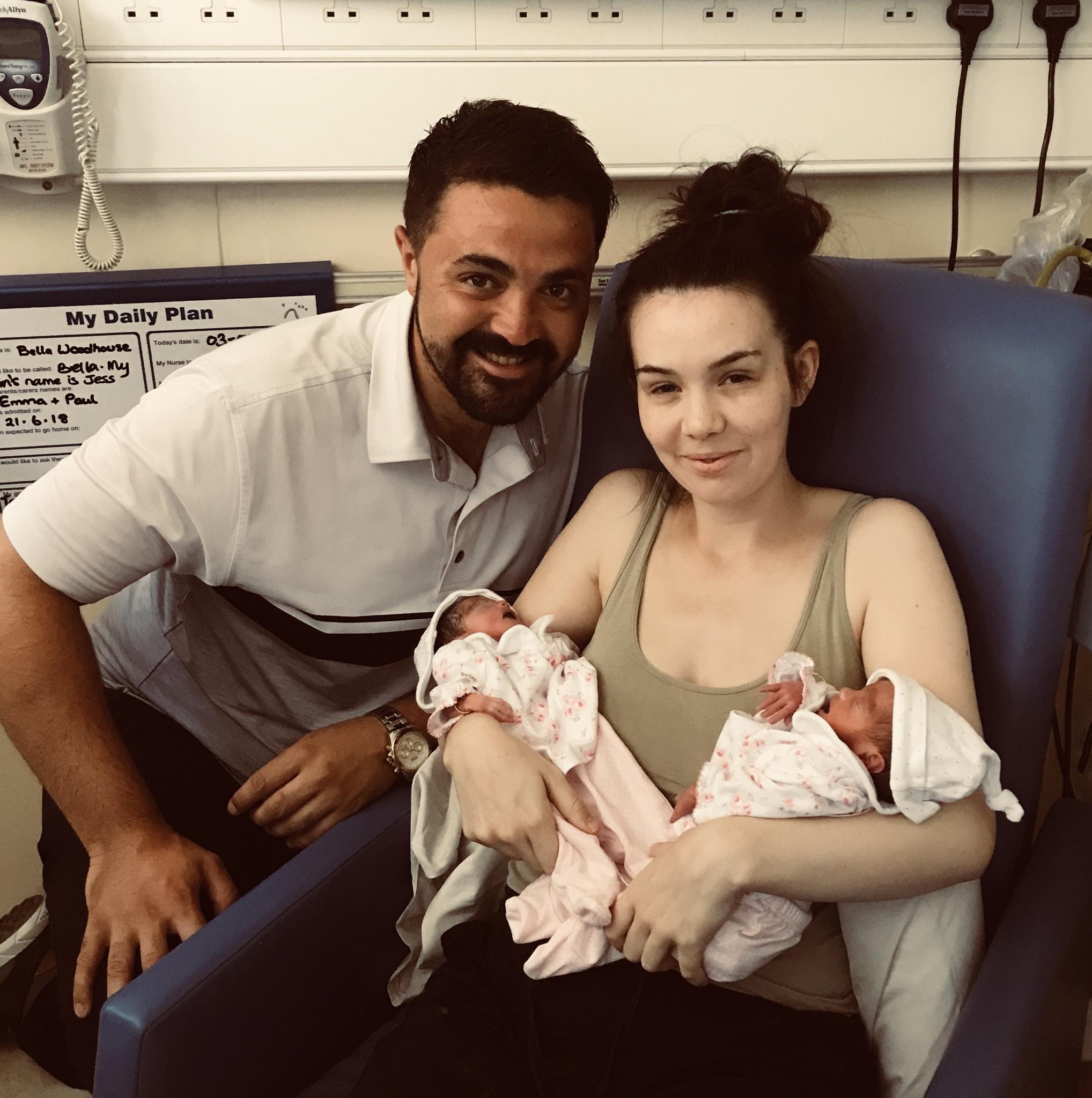 He doesn’t know how much his childish support helped me during those two weeks and even now.

The day after she died we took Jess in a white woollen basket to see her sister.

Laying her carefully next to Bella in her incubator I felt complete. Finally, I was a twin mum. I’d dreamed of that moment for seven months.

Even though Jess was dead, she was still my baby and still Bella’s sister. They weren’t identical but it didn’t matter – they had an unbreakable bond which couldn’t even be cut in death.

At that stage I couldn’t cuddle them both as Bella was a tangle of wires, feeding her and helping her breath. But, amazingly, as her twin was laid next to her, Bella’s previously weak heart rate soared.

It was as though she knew her sister was there – urging her on.

The hospital had a professional bereavement photographer and they took pictures of our girls together, snuggled up close. 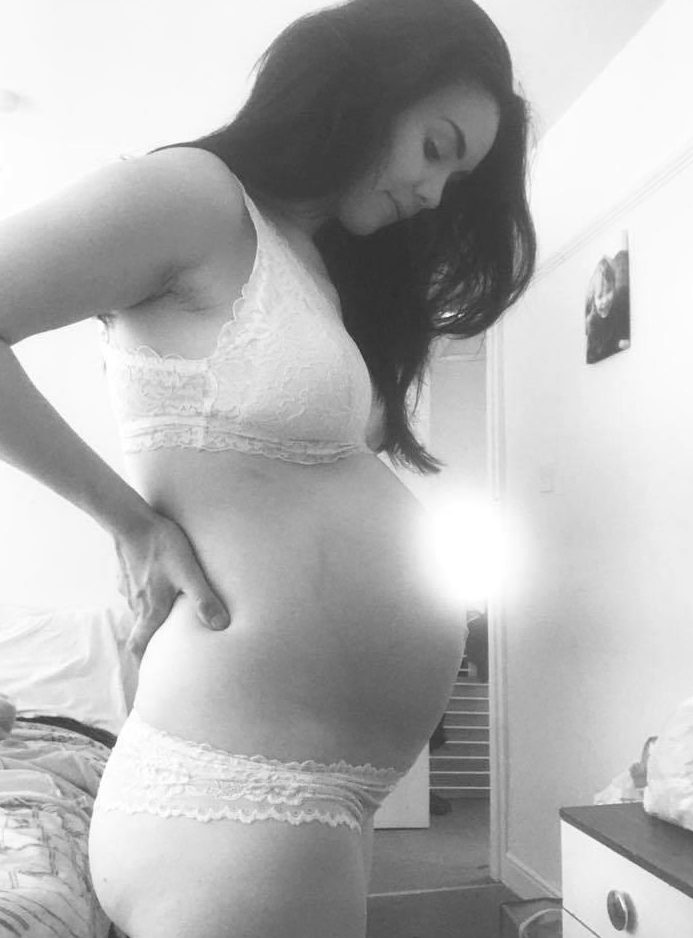 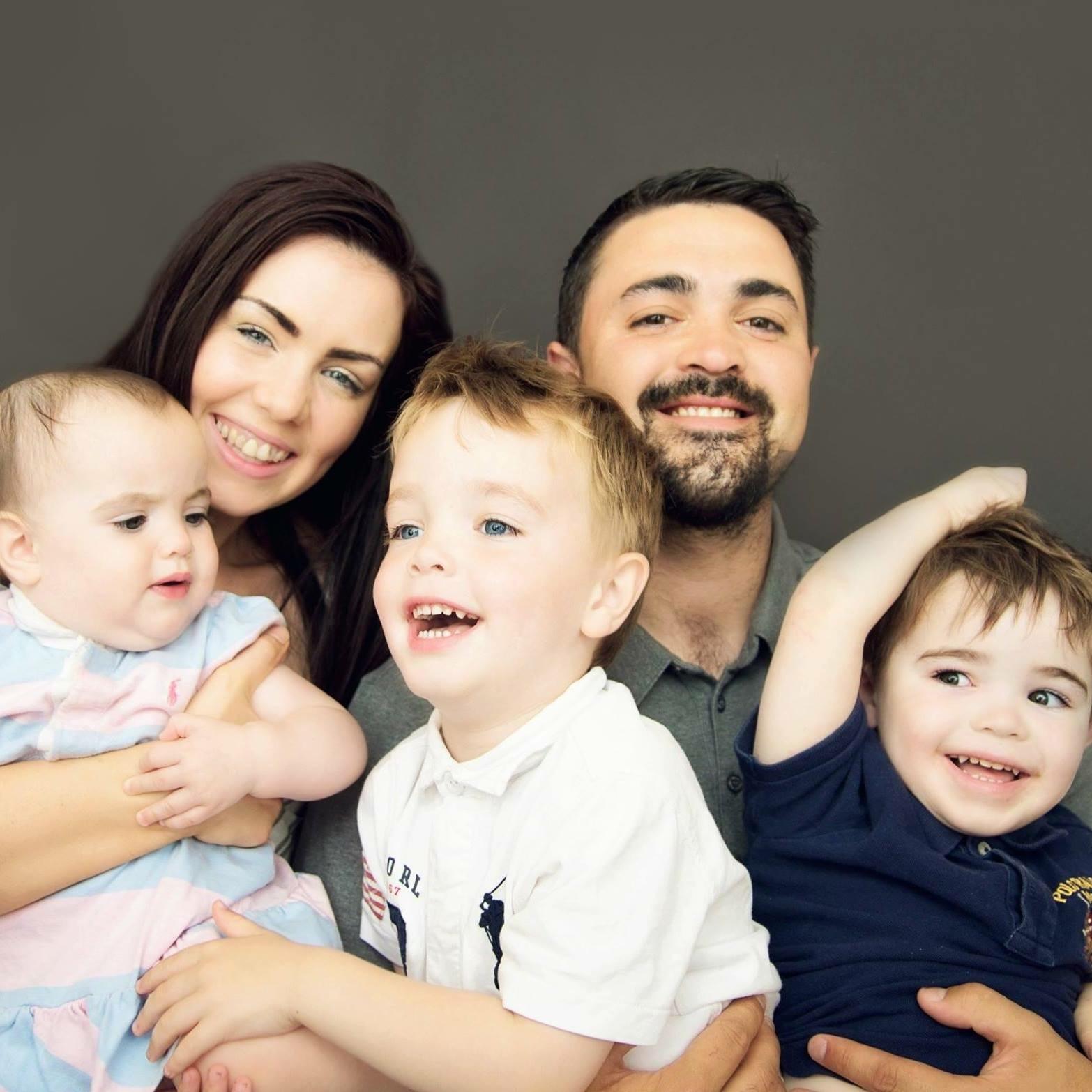 Over the next two weeks we spent every waking moment with Jess, getting to know her as best we could. I slept in a ward, recovering from the trauma of the birth but as soon as I was awake I would race back to my girl.

Carefully I would dress and wash her, kiss her tiny body, sniff her soft head and take her on walks in the pram around the hospital and outside in the hospital grounds.

I worried people might pop their head into the pram to sneak a peak at her and wondered what I would say to them if they did, but no-one did and it was nice to walk around with her and feel normal.

We would sing to her, nursery rhymes like Old McDonald and Twinkle Twinkle Little Star, and whisper how much we loved her in  her ear.

We’d read her books like Peter Rabbit and Jemima Puddleduck too, books that we will now read Bella. 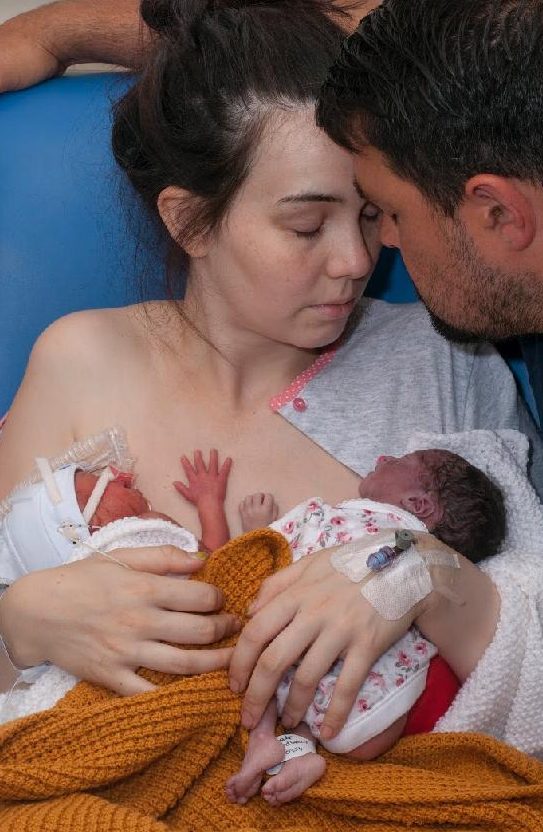 'I love you so much,' I’d tell her. And regularly we would pop along to see her sister.

It was wonderful. Sad, of course, but also lovely to get to spend time with her.

Around a week after she was born Bella had her breathing tube removed and was well enough to be cuddled. So, for the first time, I was able to pick up both my girls in my arms and hug them simultaneously.

It was such a precious moment. The bereavement photographer returned and took additional pictures of the girls without their tubes cuddled up together.

But, after two weeks, it was time to say goodbye. The crematorium had a funeral slot available and I knew that some other mum and dad might need the Cuddle Cot soon.

It had benefited me so much, I couldn’t  deny someone else the opportunity.

But I didn’t want to leave her… I could have sat with her forever. 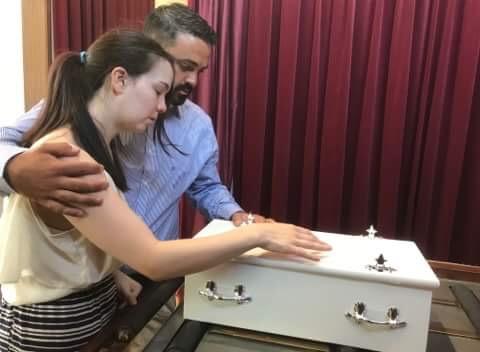 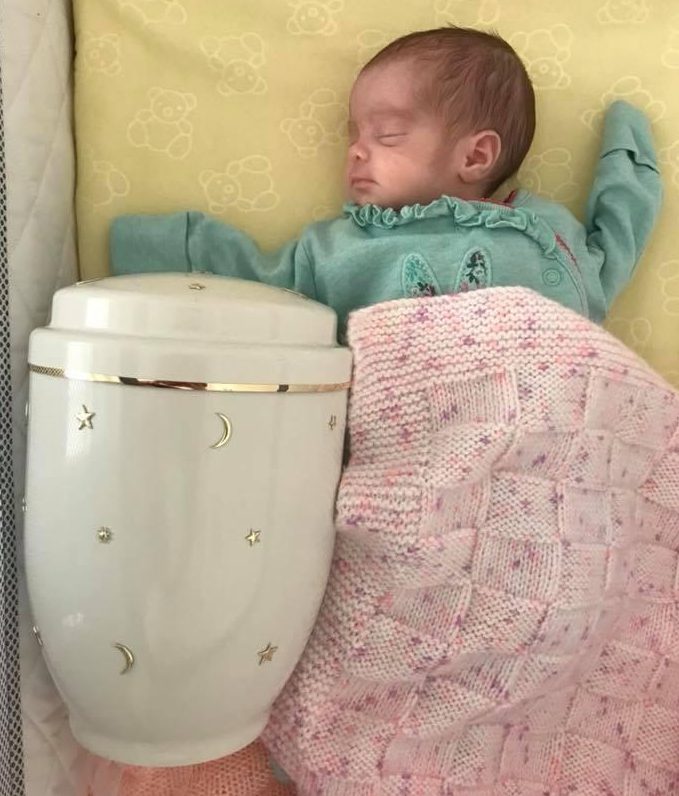 We held her funeral on July 5 this year at Lancaster Crematorium. We dressed her in a little white gown – a donated piece of wedding dress from the charity Cherished Gowns who make funeral outfits for stillborn babies – and laid her in a tiny white coffin as we sang songs.

All the children were there and afterwards we took them to Blackpool so they could race around while Paul and I came to terms with our loss.

On August 6 Bella was discharged from hospital and we returned home a family of six, not seven, as we had hoped.

A subsequent examination of both girls’ placentas revealed that Bella’s was in the process of deteriorating like her sister’s – meaning if she hadn’t arrived when she did she would likely have also died. 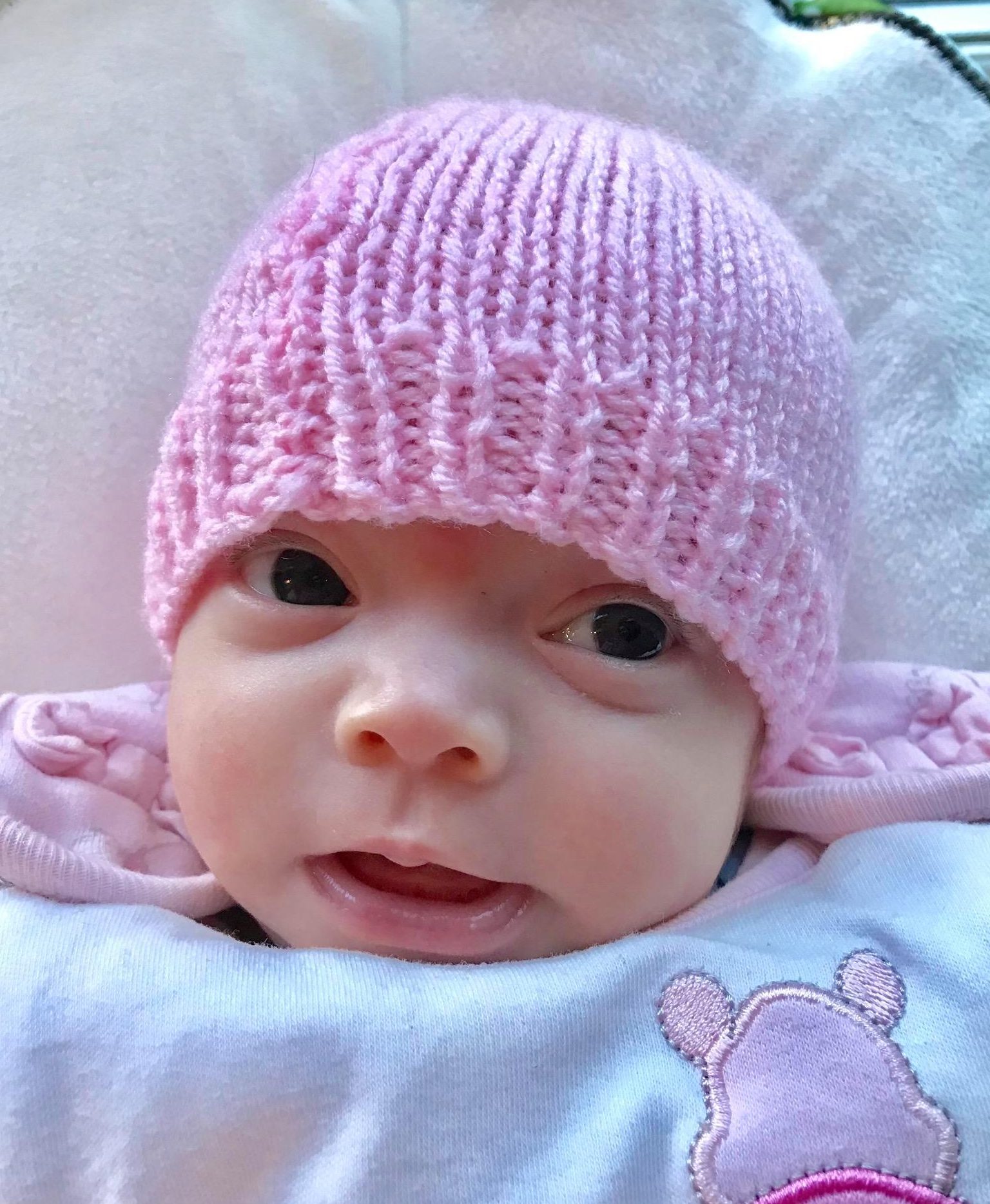 We put Jess’ ashes in a white urn and placed them in our bedroom. We hope when we die they are mixed with mine and Paul’s ashes. We’ve photographed the children with the urn and Jack knows his sister is in there. ‘Hi Jessica, I miss you,’ he says regularly.

It is heartbreaking, but I also find it comforting. He won’t forget her. I have five children, and he knows that.

This Christmas we have stockings for all the children – including Jessica. We might have never met her while she was alive but in sitting with her for two weeks we got to know her.

I know some people might think it is strange that for two weeks I sat with my dead child, cared for her, walked with her, sung to her and took pictures with her.

But I don’t care. For seven months I grew her and nurtured her in my womb. I loved her so much and still do. She was a real baby and I want people to know that.

Meanwhile, a heartbroken mum who delivered a stillborn baby released poignant photographs of him – and told how it has helped her heal.

And, one woman told how distressing it was to deliver her child, knowing he had died in her womb.