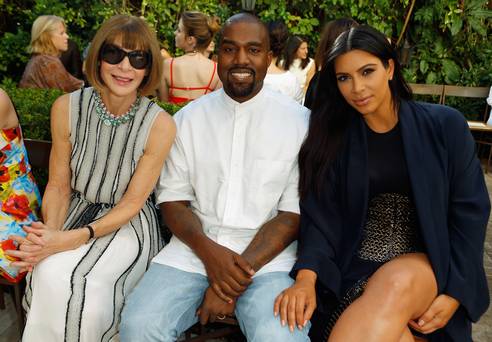 The 68-year-old Vogue editor-in-chief has praised the reality star’s fashion evolution and credited her wardrobe containing pieces that are simple and “more covered”. Speaking in this week’s episode of Vogue.com’s series, ‘Go Ask Anna’, she said: “Kim of all of them I feel has possibly changed the most.

The fashion editor also praised the way the Kardashian family live their lives so heavily in the “public eye” and have still built a huge empire. She added: “You have to admire how they have created an empire obviously through their personalities and creative genius of their mother [Kris Jenner]. And how they live the way they do, I can’t possibly understand or fathom living so much in the public eye. But obviously it works.”

Anna also praised 23-year-old catwalk model Kendall Jenner for “persevering” with her career when she was written off as just another reality star, comparing her to supermodel Linda Evangelista.

She explained: “So obviously the Kardashian that we’ve had the most experience with at Vogue is Kendall. People thought that she wouldn’t last and I give her a lot of credit for persevering in her successful modeling career.

“I see Kendall very much in the same way. Linda was happy being a model. I think maybe some of the other girls that came up at that time wanted other careers, whereas Linda loved being a model.