Elliot Claire: What kind of baby name is that? A girl’s name? A boy’s name? Both?

Mission accomplished, said Elizabeth and Sean Scotten, of Oakland, Calif., who became parents to Elliot Claire almost a year ago. “We loved the juxtaposition of a name that’s more traditionally masculine and a name that’s more feminine,” Ms. Scotten, 35, explained. As the baby grows up (it’s a girl!), she can use any combination of the two.

“My husband went through the experience of having to change his name,” Ms. Scotten said. The couple started out as high school sweethearts, at age 14. “When we first met, he was living as a girl. He was my first girlfriend, and that’s changed.”

As for the nursery, the Scottens wrestled with a design question encountered by a generation of new parents, who, surveys suggest, hold more accepting views of gender nonconformity. How to create a room where a baby can grow up to become a boy, a girl or whatever feels right?

Kerry Hegg, the head of product development for Crate and Kids, heard some of these preferences in parent focus groups the company hosted last summer. Mothers expressed a desire for beautiful, inspired products. They wanted to make rooms where children could express their personalities. However, “they may not want to assign a specific gender or force a gender,” Ms. Hegg said.

This was a change from 10 years ago, or even five, Ms. Hegg added. Then, the baby aisle strenuously separated products by gender — often to mystifying effect. If cats are for girls, why are big cats — lions and tigers — for boys? What’s inherently masculine about an astronaut in a spacesuit?

The Scottens chose a design scheme that felt true to their family values. Ms. Scotten is a middle school English teacher; Mr. Scotten, a writer. The nursery theme they came up with? Books.

Stories teach empathy, Ms. Scotten said, as characters encounter new people and places. “It’s the anti-gender binary, to be immersed in seeing the world with a lot of different possibilities through stories.” 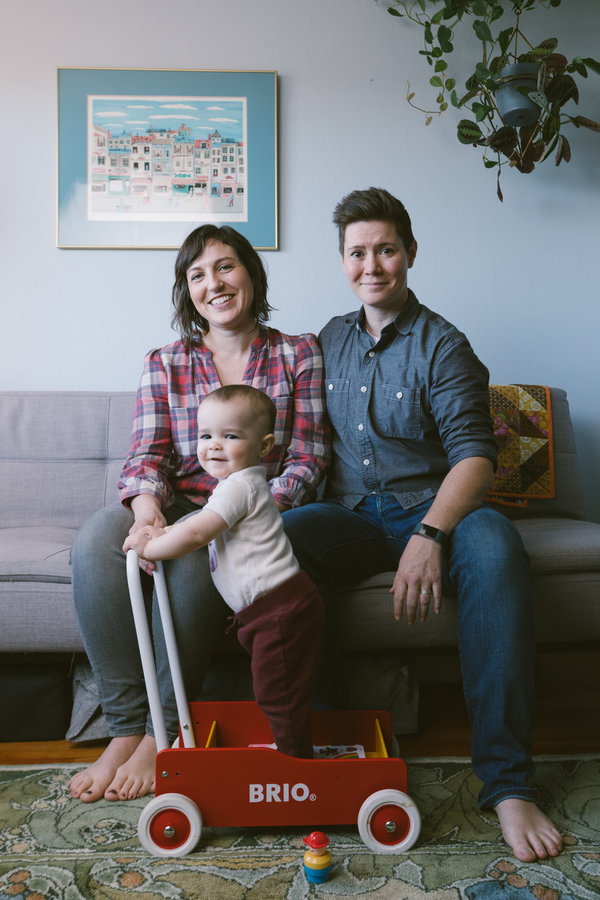 The Scottens picked images from some of their favorite childhood classics: “The Velveteen Rabbit,” “The Paper Bag Princess,” “The Giving Tree,” “Old Possum’s Book of Practical Cats.” Next, they scanned the illustrations, blew them up on thick card stock, and arranged the art on the walls.

Not every old book fit their value system, Ms. Scotten said — or the muted, modernist color scheme that matched the room’s Craigslist crib and hand-me-down rug. “I was like, ‘Poky Little Puppy,’ you can’t join us on our wall.’”

They’re babies, doubters will say. A newborn doesn’t infer anything from the fire truck pattern on the crib bumper.

Here, the doubters would be wrong, or so a body of research suggests. Children don’t begin to categorize their gender until the age of 2 or 3, explained Harriet Tenenbaum, who studies gender identity at the University of Surrey in England. At that age, “it’s a real incipient understanding,” based on vague traits like hair length and height. (“They don’t have a great understanding of genitalia,” Dr. Tenenbaum added.)

But young children pick up cues from the toys they’re given, the words they hear, the books they read and the behaviors they encounter on the playground.

Dr. Tenenbaum pointed to a 2008 study that dealt with children’s rooms, in the behavioral science journal Sex Roles. The researchers showed photos of young children’s bedrooms to untrained college students and asked them to guess the child’s gender. The participants succeeded more than 90 percent of the time.

Finally, researchers discovered, the children who lived in these kinds of bedrooms expressed more traditional views of gender in their own interviews.

Stripping the space of anything gendered is a poor solution, says Suzanne Tick, who has written about gender identity in design and who creates textiles and floor coverings at her New York firm, Tick Studio. A better strategy involves filling the room with materials and toys that encourage engagement and play.

Practically, she said, that means “activating a room with bold shapes and bold colors and a mix of colors. Soft tents, soft places where one can crawl into. Multiple areas of exploration.” She would encourage parents to decorate the room with books, plants, terrariums, ant farms, fishbowls.

An-Lon Chen, 42, can see her 3-year-old daughter, Nora, piecing together the rules and rituals of gender with her playmates in Seattle. Nora “misgenders” a beloved stuffed toy, “clearly intended to be a girl doll.” One day the doll will be “he,” the next day, “she.”

What interests Ms. Chen about this habit is that it mimics her own parents, Chinese immigrants whose easy fluency in English wobbles around gendered pronouns. Ms. Chen recalls that her father conducted his own parenting experiment. He gave her a name, An-Lon, that sounded gender neutral in English and male in Mandarin. And he raised her in the same demanding style as her brother. Not unisex, but essentially male.

The treatment felt disorienting: Her unstylish clothing didn’t match the way she felt inside. As a parent designing her own girl’s space, Ms. Chen set a different course. She tapped into the professional-grade empathy she’s acquired as a software engineer specializing in user interface design.

The family’s modern three-bedroom home feels upside-down. The kitchen, living room and playroom stack above the bedroom and nursery. How could she make this 3D maze navigable for a clumsy toddler?

“For me, the empowerment is more important, I guess, than the surface detail,” she said. With YouTube as a guide (and Home Depot as a supplier), Ms. Chen built a series of oak handrails, bridging one level of the home to the other. Height: About 20 inches off the ground.

A fleet of step stools gives Nora access to counters and shelves. And in the bathroom, a secondary rack for toilet-paper rolls stands within a toddler’s arm length.

Boy or girl, no one likes to fall off the potty.

For Ms. Chen, gender nonbinary nursery design means understanding that a child foremost wants to master her environment, and tools like step stools, faucet adapters, and railings encourage that development.

This is a universal principle, she said. An independent child can express her gender in this realm when and how she chooses. “All these meaningless choices parents make — worrying that a pink hippopotamus is too girlie — fritters away design energy that could be going somewhere more interesting,” she said.

When Kirsten McDonald, 29, began to create a nursery in Plano, Tex., she looked to her own visionary: Walt E. Disney. Wait: Does she mean the avuncular animator whose company more or less invented the American princess?

“I love ‘Beauty and the Beast’ as much as the next girl,” Ms. McDonald explained. “But that’s not where my love of Disney comes from.” Growing up in small towns across what she described as the “Southern Bible Belt,” she experienced the Disney theme parks as a giddy, cosmopolitan haven. “One guy had a vision of a place where people could have fun together,” she said.

By the time she became pregnant, Ms. McDonald worked for a hedge fund and traveled in less playful social circles. But she and her husband decided not to learn the sex of the baby until birth.

How to keep the pink and blue junk (and the gender biases they represent) out of the house? “The only way to do it would be not to give anyone any option,” she said.

In the meantime, she began to assemble her Disney nursery. She landed on the vivid colors and midcentury-modern geometry of the artist Mary Blair, who developed concept art for the Disney movies “Alice in Wonderland” and “Peter Pan.” Her best-known design work went into the theme park’s famous ride “It’s a Small World.”

“I figured bright colors would be easy to find for a baby, but they weren’t at all,” Ms. McDonald said. “Everything is pastel.” She bought an off-trend area rug from Overstock.com. And she custom-ordered a blanket and crib skirt from Etsy. A favorite aunt took an old family dresser and painted it with colorful pennants.

When the baby was born two years ago, the McDonalds blasted out the first round of photos without specifying a gender. The name, finally, gave it away: Eli McDonald, after Elias — the “E” in Walt E. Disney.