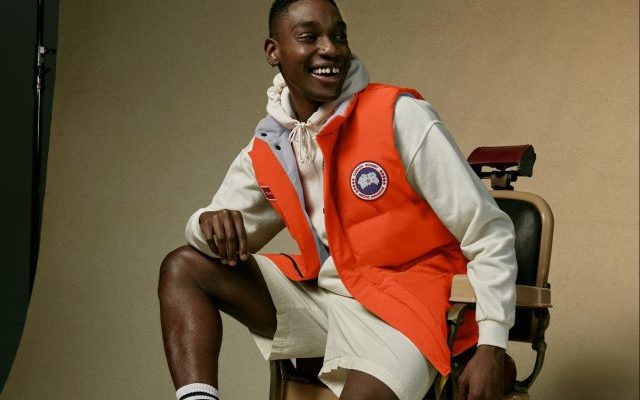 The NBA All-Star Weekend is usually a star-studded, multimedia extravaganza — and a cash cow for apparel brands that create special product drops and engagements for fans of the sport.

With All-Star Weekend being condensed to just one day, Foot Locker, Canada Goose and Bleacher Report were among the few brands that participated in the annual basketball festivities. An exhibition game that brings together the best players in the NBA, it’s also a spotlight for the league’s young and popular talent to showcase their skills in events such as the 3-Point and Dunk Contests.

It was actually easy to miss the All-Star Game this year since it almost didn’t happen. It is usually held in February, and was originally planned to be held in Indianapolis in 2021. Because of the pandemic, it was moved to March 7 in Atlanta.

What is typically a weekend of basketball games and contests was condensed into a single evening consisting of the Skills and 3-Point Contests and the game itself, with the Slam Dunk Contest relegated to the halftime show.

With the regular season being held in empty arenas or in front of intimate audiences to adhere to COVID-19 protocols, the All-Star Game seemed almost pointless to many and represented an increased risk to players’ health. Los Angeles Laker LeBron James was outspoken in his disagreement with holding the event, and Minnesota Timberwolves star Karl-Anthony Towns, who lost seven family members including his mother to COVID-19 and caught the virus himself, was also vocal in his opinions against the game happening. Philadelphia 76ers stars Ben Simmons and Joel Embiid were selected to participate in the game this year but sat out due to contact tracing.

Still, the show went on, but the last-minute decision put brands — especially the ones that participate in All-Star Weekend every year — in a hard place. Some went the traditional route, launching product tied to the event, while others tried something entirely new.

Canada Goose was one of a few companies that opted to go the traditional launch route, alongside Nike, Adidas and Under Armour, who release new sneakers during NBA All-Star Weekend every year.

Prior to the game, the outerwear company announced a multiyear partnership with the NBA and launched a capsule collection with Los Angeles-based brand Rhude to kick off the partnership. (The collection is also being gifted to this year’s NBA All-Stars.) The announcement wasn’t met with universal acclaim as PETA wrote a letter to NBA Commissioner Adam Silver about the partnership. PETA executive vice president Tracy Reiman urged Silver and the NBA to sever ties with Canada Goose and align with a “modern vegan outerwear company.”

The letter stated, “In the middle of a devastating pandemic during which record numbers of Americans have lost their jobs and even their homes, it makes the NBA appear even more tone deaf to be hawking overpriced outerwear (which mostly only the players and team owners can afford) from an infamously cruel company with an international campaign against it. I urge you to prove to your fan base that you prioritize their interests over money by replacing Canada Goose as an outerwear partner of the annual NBA All-Star Game.”

Canada Goose responded, citing the Sustainable Impact Strategy in its inaugural Sustainability Report: “At Canada Goose, we are deeply committed to the sustainable sourcing, and responsible use of all materials in our products and our standards reflect that commitment.” The report opens with Canada Goose condemning “any willful mistreatment, neglect or acts that maliciously cause animals undue suffering,” and includes the company’s commitment to being Responsible Down Standard-certified by 2021. “The Responsible Down Standard is a global standard that certifies that down and feathers come from animals that have not been subjected to unnecessary harm and respect the Five Freedoms of animal welfare,” the statement added.

As for the brands that went the non-traditional route for this All-Star “Weekend,” Foot Locker launched a virtual experience called FLHomeGame, where users could tweet Foot Locker to enter and win challenges on the FLHomeGame microsite.

Foot Locker vice president of marketing Jason Brown said the retailer aimed to surpass benchmarks despite not having a baseline comparison. Participants in FLHomeGame answered trivia questions like “How many people were in attendance the night Kyle Kuzma scored his game high points record?” and “Who were the first five players signed to Jordan Brand?” Winners scored prizes like a basketball virtual shooting session with NBA Shooting Coach Chris Matthews, better known as Lethal Shooter; Air Jordan 1 sneakers signed by Melody Ehsani; Quavo’s game-worn sneakers, and a $500 Foot Locker gift card from Rick Ross, among other prizes.

Brown stated that All-Star Weekend is “equivalent of the Super Bowl,” in that the entire league and fans will travel to the host city to participate in the sports culture. The weekend is significant revenue period for the retailer, as well as other basketball adjacent brands.

“We wanted to do something for All-Star break, but we didn’t know the game was going to happen,” Brown said. Foot Locker originally had planned to hold an event for on the original February date, but moved it to March 7 after the NBA announced the switch. Brown added that FLHomeGame was put together “in record time.”

“Given that this wasn’t a traditional All-Star, we didn’t have that traditional suite of product from vendor partners also complemented by your favorite player coming to the store,” Brown said. “It’s just as important to really reinforce our position with consumers as the premium place to be to get footwear in the market.”

Bleacher Report programmed two shows: House of Highlights Showdown: Knockout Royale, where eight social media creators competed for $100,000 in a game of Knockout, and B/R Open Run, a 2v2 pickup game between rappers Lil Baby and 2 Chainz versus Quavo and Jack Harlow. The winning teams of both contests donated their prize money to several HBCUs.

Knockout Live pulled in a viewership of 440,000 people in less than 24 hours, and the Open Run contest generated 3.9 million engagements over 33 million video views. B/R Open Run also peaked at the number two trending topic on Twitter and Quavo and 2 Chainz were among the top five trends in the U.S.

In addition to the charitable component, BR released its first-ever non-fungible token (NFT) drop of 3D digital models of four custom designed basketballs on OpenSea, made in collaboration with the four artists. The tokens were traded for blockchain Ethereum (ETH).

A spokesperson for Bleacher Report said its plans for this year’s NBA All Star game didn’t begin until a month before the game when the league announced the game would be played. “We start ideating eight to 10 months in advance,” the spokesperson said. “We knew given the circumstances we had to be nimble so this one started later than what we would’ve done.”

Engaging with the consumer around NBA All-Star is important, but new product is typically the center of brands’ engagement with the consumer for the weekend. Bleacher Report managed to put out programming and also connect with its fan through digital assets, but what about Foot Locker?

“If the world is normal, there is no replacement for us being able to engage with our fans in an intimate form and work with our vendors,” said Brown. “There is nothing that can replace that. We are taking learnings like this to complement the stores in a sort of hybrid model.”