Hermès Birkin bags, which start at $40,000 a pop and can run as high as $500,000, are being cut up and turned into Birkenstock sandals, thanks to the same company behind the holy water-filled Jesus Shoes.

Called Birkinstocks, the sandals are made from genuine Birkin bags that are then destroyed and hand-crafted, as seen in a manufacturing process video on the brand’s site, into Birks — a favorite of fugly footwear enthusiasts and “Soho Karen” alike.

But these aren’t your average hippie-flops. The Birkinstocks from Brooklyn-based product design company MSCHF range in price from $34,000 to $76,000, and come in a box similar to the French luxury goods’ iconic orange packaging.

The limited-edition shoes became available to purchase by request only on Feb. 8 at 11 a.m. Already, the upcycled footwear reportedly has a celebrity following: Rapper Future and singer Kehlani both have already bought pairs, according to the company, as well as “multiple billionaire art collectors” — though MSCHF stayed mum on the identities of these mystery buyers.

MSCHF — which became famous for Nike sneakers full of actual holy water in 2019 — got the idea to shred up the notoriously hard-to-get, coveted bags and turn the oft-sought-for luxury into a Franken-shoe spawn thanks to a gag from co-founder Daniel Greenberg.

“For a while, there was this joke going around the office,” Greenberg told The Post. “My crunchy cousin Jimbo stepped on my rich aunt’s Birkin bag in his dirty Birkenstocks, and for whatever reason, that led me to pitch doing Birkinstocks as a drop.”

Fully customized to order, there are several colors to choose from, including red, made from a $48,000 Hermès Porosus Birkin 35 bag; black harvested from a $19,500 Clemence Birkin 35; white sandals pulled from a destroyed $31,000 Porosus Birkin 35 Bag; and another black option from an Ostrich Birkin 35 bag worth $24,000.

While the idea of tearing apart a Birkin might make some shudder, MSCHF said it takes great care in the bespoke designs. All crafted by hand in the US, the process begins with an individual Birkin, which is then disassembled, flattened and cut before the luxe leather is adorned with the golden “Birkinstock” appliqué and paired with an actual Birkenstock cork footbed and rubber sole.

Don’t call it a collab, though. MSCHF insists it’s more of a “transubstantiation” than a collaboration.

“Historically we make luxury objects out of inherently valuable materials,” the company said. “We can look to the Birkin bag itself as the new luxury raw material par excellence. Birkinstocks, though, are no collaboration; perhaps we might more properly call them a transubstantiation.” 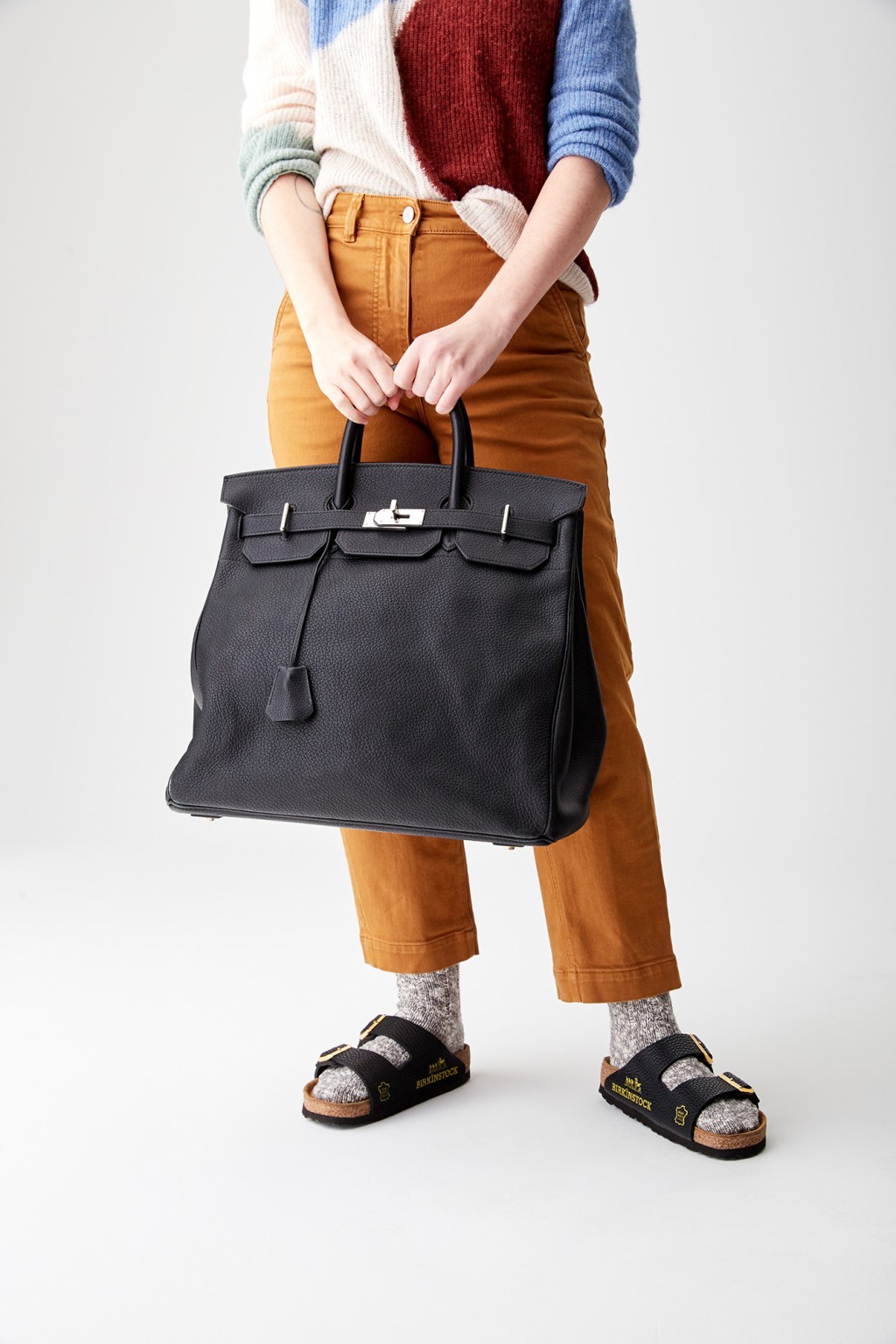 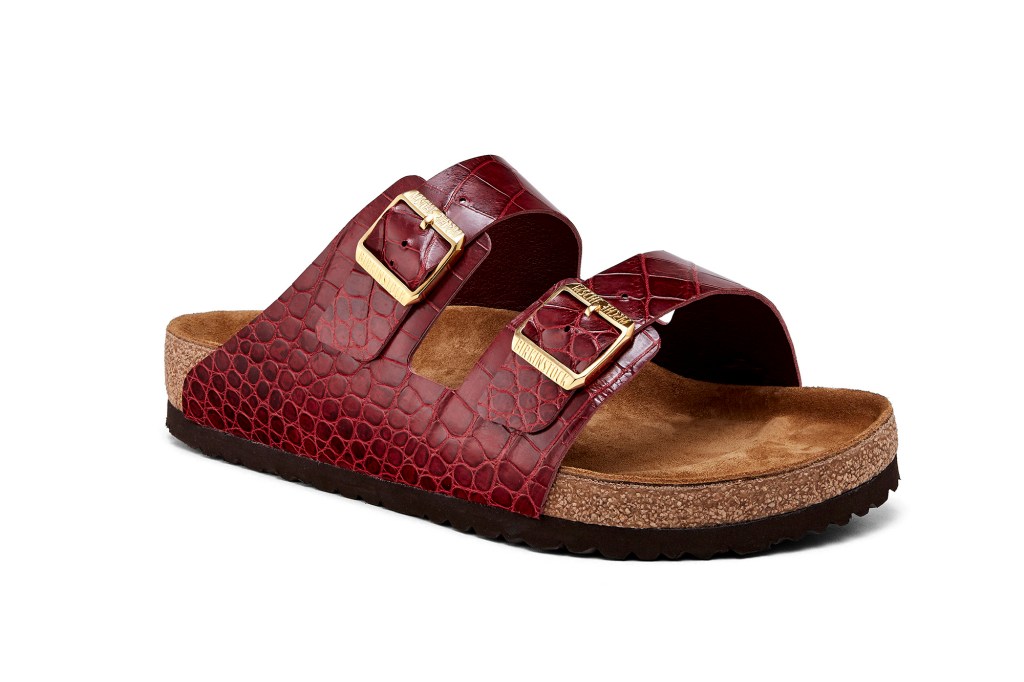 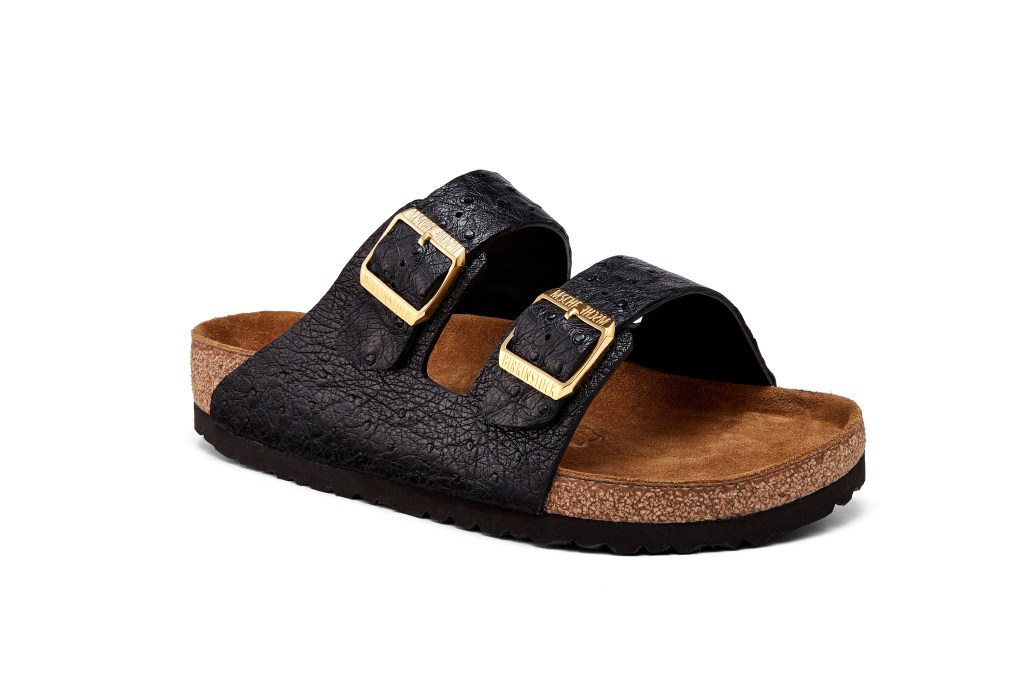 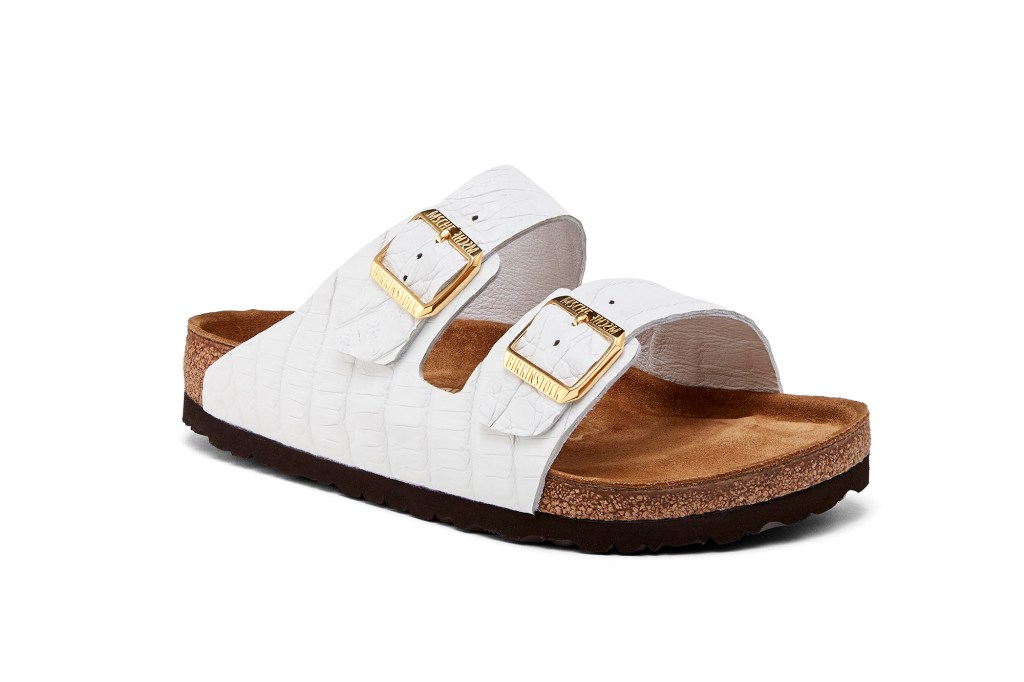 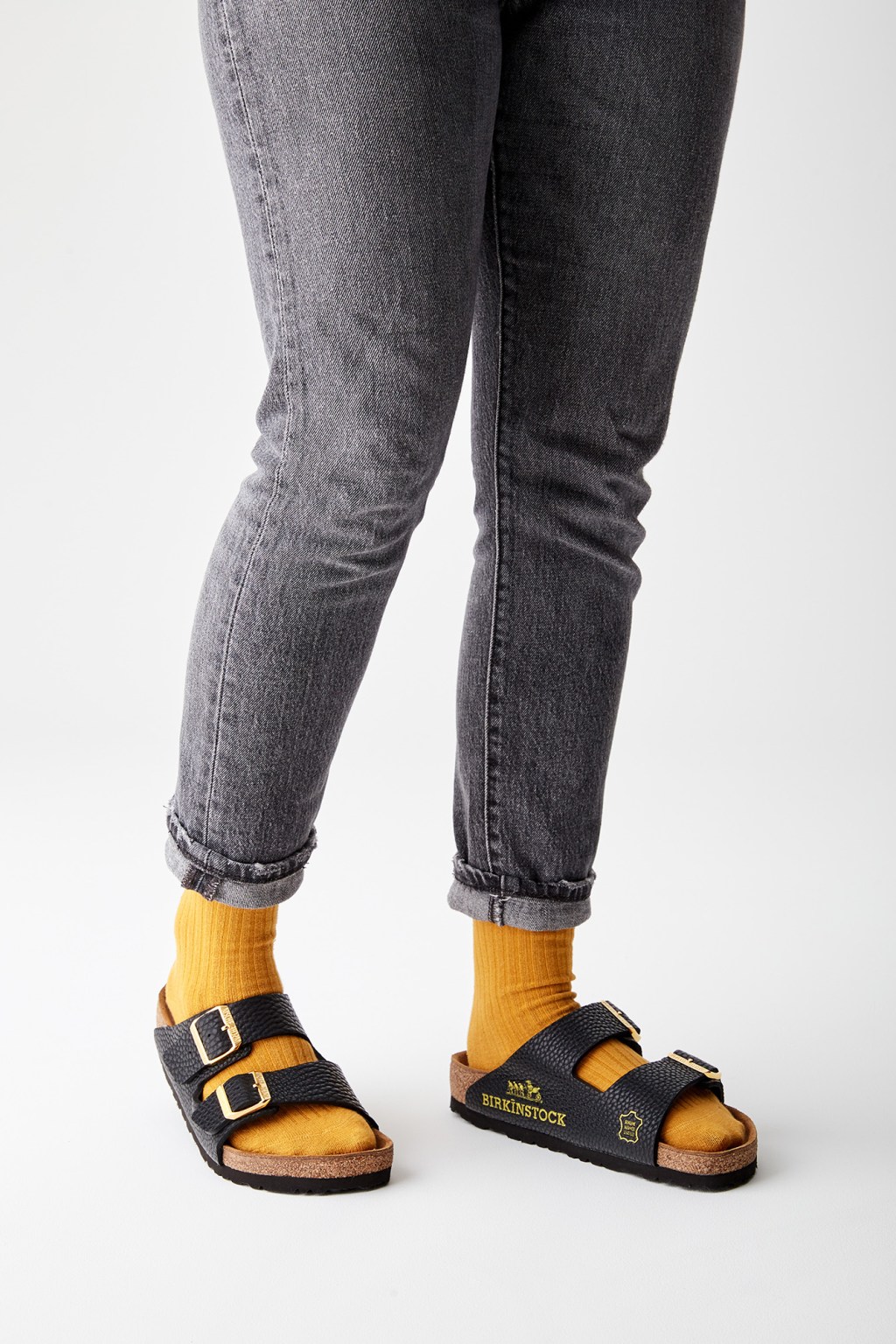 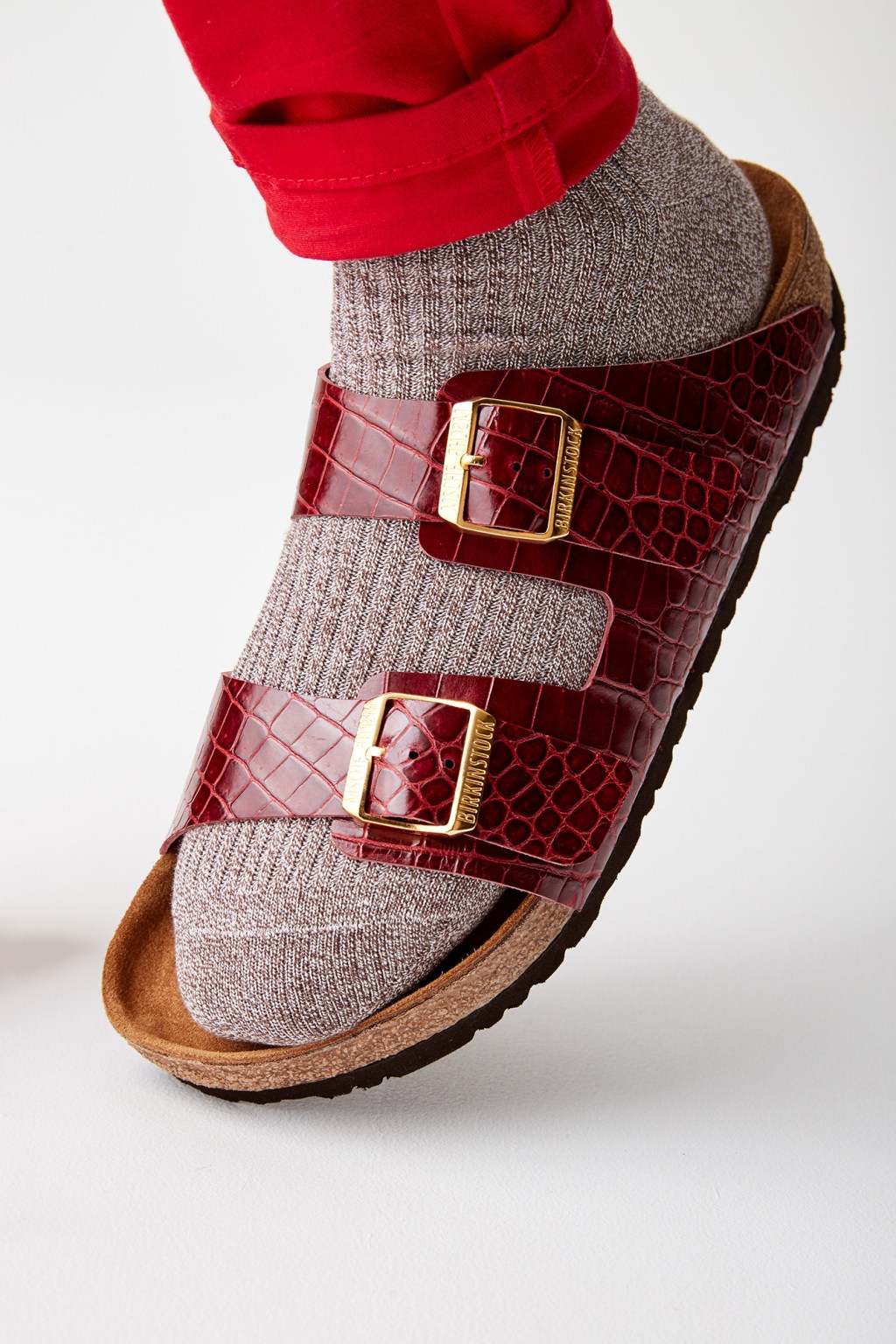