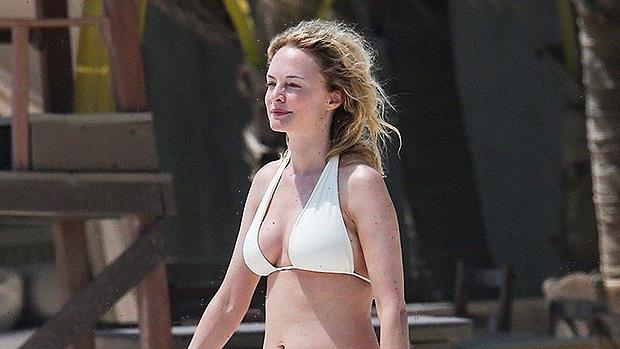 Actress Heather Graham ushered in pool float season with the ultimate vacation pic: a bikini snapshot on a scenic beach — with a giant inflatable flamingo.

Heather Graham is ready for pool float season! The actress, 51, shared a scenic vacation photo from the waters of Greece on Instagram on Friday, July 16 in the ultimate summer uniform: a classic black two-piece bikini, paired with a quintessential summer accessory: a massive pink flamingo pool float.

Heather finished her vacation uniform with black sunglasses and a straw hat, which she placed right next to herself in the float. The filmmaker appears to be living her best relaxation life, having taken trips along the east coast within the last few months, including Maine. She shared scenic photos in early June, rocking the same straw hat that she packed for Greece.

Heather rose to prominence at the age of 18, making her big screen film debut in the 1988 teen comedy License to Drive opposite Corey Haim and Corey Feldman. She also starred in The Hangover, Austin Powers: The Spy Who Shagged Me, and Boogie Nights, among others, taking on roles of the “sexy blonde.” The actress recently starred as an attorney in the 2020 thriller film Wander, centered on a private eye hired to investigate a suspicious death.

In an interview with CNN last December, Heather revealed she considered enrolling in law school to better understand the part — but also, shed her sexualized film persona. “[Growing up,”] I was in all these brainiac classes and I used to just pray people not just see me as a brainy girl,” Heather told the outlet. “But then I got all these sexy roles.”

Still, Heather said she was “so grateful” to work in “this amazing business,” expressing a desire to direct more. “I’m definitely grateful that I was in Boogie Nights and that I wrote and directed a movie called Half Magic,” she told CNN. “That was really exciting just to pick up an idea and then watch it get made. So, I definitely want to do more of that. I hope to direct again because I kind of feel like that’s the next step, to be behind the camera and tell a story that matters to you.”