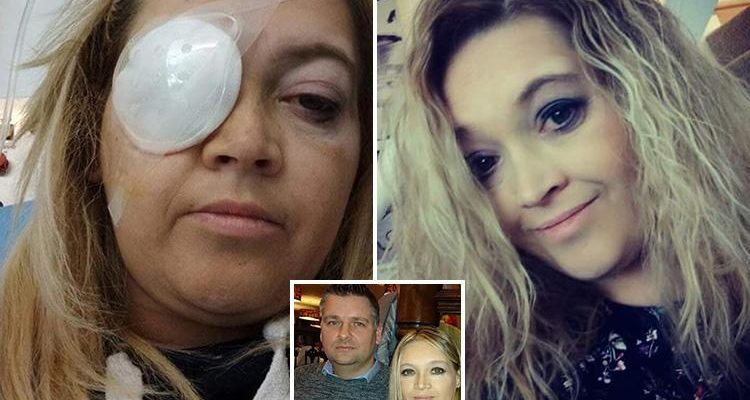 Seconds earlier I’d been tidying my daughter’s room, but as my sight disappeared, I knew that years of abusing my health had finally caught up with me.

I was just 17 when I was diagnosed with Type 1 diabetes, after feeling constantly exhausted and thirsty. I was due to start a media course at Newcastle College a few months later, and my excitement disappeared when I learned I’d have to follow a gruelling regime of up to six insulin injections a day to stabilise my blood sugar.

My doctor warned me that having diabetes would mean I’d need to be strict about my lifestyle, so I vowed to focus on my education instead of going out.

But it was hard when classmates would gawp at me if I felt shaky in class and had to give myself an injection.

Watching friends down pints of cider and shots at house parties while I stuck to water made me feel like an outsider, and it didn’t take me long to rebel against my condition.

Within a few months, I started to drop the injections. I began to feel thirsty and tired again, but I convinced myself I could live with the symptoms.

By the time I left college in 1999, I’d given up the insulin completely and was partying every weekend, knocking back just as much cider as my friends.

My parents were worried, but I assured them I knew what I was doing. However, my doctor starkly told me skipping insulin was so serious my organs could shut down. Stupidly, I just thought he was trying to scare me.

And at first life was fine. I carried on drinking and eating what I wanted until I settled down with my then partner and had my twin son and daughter when I was 21.

However, by the time I hit my late 20s my health was deteriorating. I was constantly exhausted and found running round after the children really hard. But still I couldn’t bring myself to go back on the injections.

It was only when my mum, Jacqueline, now 60, was diagnosed with cancer in August 2014 that I realised how selfish I was being. The thought of losing her terrified me, yet I was doing the same to my own children.

The morning after my mum was diagnosed, I primed my insulin pen again. Almost immediately I felt healthy for the first time in years.

But then a month later I suffered a haemorrhage in my left eye while I was watching TV. All of a sudden, I couldn’t see the screen properly and it felt like a red filter had been put on my eye.

Naively, I was sure it would pass, but eventually I went to see my GP, who told me it was a complication often seen with diabetes, known as early diabetic retinopathy. He said that if it wasn’t treated with surgery, I would be left blind.

It was so much to take in. Then, just a few weeks later in my daughter’s room, I felt my other eye pop and blood filled my vision. Within seconds I was totally blind and terrified. I screamed for my partner David, and he rushed me to hospital.

Within hours I had the first of many surgeries to try to restore my sight. But that was only the beginning of my problems, as by summer 2016, my legs had begun to swell with fluid.

My doctor warned me it was a sign my kidneys were failing – all because I hadn’t managed my diabetes properly for so long.

Earlier this year, I received the devastating news that my pancreas was also failing. I’ve been told that without a double transplant in the near future, I will die.

I feel so angry I disregarded my health, though my family, including my mum who is now in remission, have been really supportive and don’t blame me – they know diabetes is a mental strain, too.

I just feel so sad that it took so long for me to realise how precious life is, and I can only hope I get the chance to carry on living mine.