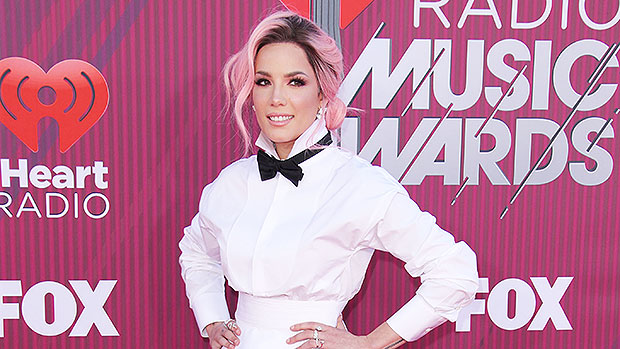 Halsey kept the her dresses on the rack and rocked a  black bowtie and matching pants to the iHearts in LA on March 14! The ‘Without Me’ singer showed off new, pink hair on the red carpet!

Halsey, 24, can make everything and anything work on a red carpet! And, that’s exactly what she did at the iHeartRadio Music Awards on March 14 in LA in a menswear-inspired look. The singer made a tuxedo ensemble her own, wearing a black bowtie with matching tight pants and pointed stilettos. Her white long sleeve top featured a cool popped collar and a cinched waist.

The “Without Me” singer surprised fans and photogs with a new do’ on the red carpet. She showed off new pink hair, which matched her lip color and eye shadow. Halsey accessorized with silver rings and earrings, but our favorite accessory was her stunning smile. Check out her full red carpet look, below!

While it’s no secret Halsey is a chart topper when it comes to music, she’s actually in attendance for a more special reason. She will be presented with the 2019 Fangirls award, which “recognizes a female artist who has pushed boundaries with her music and message while inspiring her fans,” according to a press release. And, it’s well deserved. Halsey is known for her personal interactions with fans on social media.

Halsey on the red carpet at the 2019 iHeartRadio Music Awards in LA on Thursday, March 14. (Photo credit: Matt Baron/Shutterstock)

Halsey showed up solo to the iHearts, despite rumors that she and English rocker, Yungblud, 20, would make their red carpet debut as a couple. The singers quietly sparked dating rumors in early January, when Halsey posted a photo of the pair on a sweet stroll in London.

Yungblud is slated to perform during the pre-show, and Halsey will open the show with “something new,” she teased to iHeart. The two actually released their first musical collaboration on February 13 — a lyrically passionate track, titled “11-minutes”. The song also features Blink 182 drummer, Travis Barker.