Michael Strahan knows how to make a stylish statement – and he proved it with his latest look.

The TV star was inundated with kind messages after he shared a video on Instagram in which he was wearing a very chic suit.

Michael looked dapper as he swiveled towards the camera and asked his fans to acknowledge his outfit from his own Michael Strahan brand.

“Last week @michaelstrahan was looking great on the set of @nflonfox. What @michaelstrahanbrand suit will he be wearing today???” the post’s caption read. “Find out on FOX NFL SUNDAY at 12 PM ET / 9 AM PT! #RaiseYourGame #MichaelStrahan #DailyDefense.”

The father-of-four wore a light-colored suit with a bold, large pattern and the look was a diversion from his normal attire.

Fans adored it and commented: “Yesssss Michael,” and, “That suit is SHARP,” while others added: “Slick,” and, “so handsome”.

Away from the cameras, Michael is a busy and hands-on dad-of-four and he recently admitted that he’s struggling to get to grips with his youngest daughters, Isabella and Sophia, growing up.

The pair are approaching their 18th birthday and had their proms during the summer.

Taking to Instagram, Michael shared proud snapshots of Sophia and her date. He captioned the image: “I was not ready for this moment to see one of my babies go to prom! @sophialstrahan looked beautiful with her date Sebastian at #Prom! @michaelstrahanbrand.” 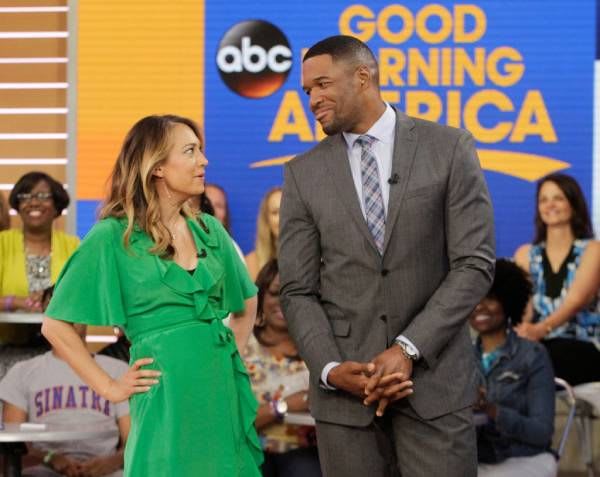 Fans were blown away by the fact the teen was of prom age already and commented: “She’s beyond gorgeous. You done good dad. Time to fly. It’s a huge transition. More for us than them,” and another added: “They’re so grown now.”

Many others marveled at how grown up his ‘baby’ looked and said it was a “gorgeous moment” captured.

Both girls are forging careers in the modeling world, but also making plans to head off to college to continue their studies.

Michael is also a proud dad to his other grown children Michael Jr. and daughter Tanita who he shares with his first wife Wanda Hutchins. He was married to her between 1992 and 1996 and maintains a good relationship with her.

The TV personality went on to welcome his twin daughters from his seven year marriage to Jean Muggli.