Actress Jennifer Coolidge has been the target of persistent teen ardour in American Pie, pity in Legally Blonde and punchlines in 2 Broke Girls – but thanks to the black comedy television series The White Lotus, she is now the object of fashion adoration. 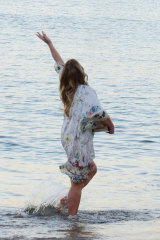 In a moment timed perfectly with COVID-19 fatigue, Coolidge has given permission for women of all ages to transition from sweatpants to voluminous sequinned silk kaftans, driving sales and earning social media support from the likes of designer Isaac Mizrahi and supermodel Martha Hunt, and spawning countless memes.

“Sales of our keepsake kaftans have gained momentum, and we’ve heard a chorus of her fans desperate to know what prints and pieces she’s wearing,” said Australian designer Camilla Franks, whose voluminous, embellished designs feature prominently in the six-part HBO series, streaming locally on Foxtel. 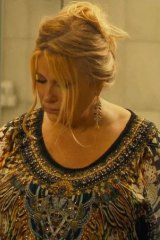 Screenshot of Jennifer Coolidge wearing Camilla in the HBO/Foxtel series The White Lotus.Credit:Screenshot

Searches for kaftans increased by 61 per cent on the Camilla website following Coolidge’s scenes in the series. The Boheme caftan from Camilla’s Paris collection has sold out, along with a faux fur kimono worn in the series from US label Jennafer Grace.

“Camilla does something incredibly special and the pieces imbue Tanya with so much of what I wanted to say – glamour, old-world charm, luxury, beauty, femininity, romance, fun and a kind of sweet girlishness,” said Alex Bovaird, costume designer for The White Lotus. “I bought a one of a kind dress from Camilla for Jennifer that I got at their boutique in Costa Mesa and it was so sumptuous and flattering on her that it just tipped us both into wanting more.”

Before the series Bovaird was not familiar with Camilla, discovering the brand while searching for the type of outfits you would find folded carefully (by others) in luxury logo-covered luggage.

“I romped and scavenged through the high-end stores of Southern California and was inspired by the women who live in tropical locations in South America and Australia,” Bovaird said. “Tanya is an adventurer and I imagined she picked up many of her pieces on her travels.”

For Bovaird, who has worked with Hugh Jackman on Bad Education and is costuming Sandra Bullock’s next project, Coolidge’s current influencer status is an unexpected bonus. 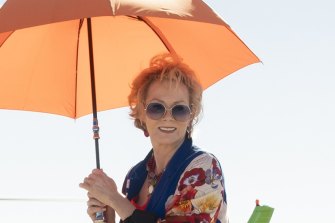 “I love it. I did try to make sure that she still had good taste and that we could look at her and not laugh at her outfits but instead think, ‘I would like to rock that’. I am slightly dismayed at the general trend into making no effort to dress up or coordinate these days – LA where I live is especially bad, and I am guilty of it too. Tanya wouldn’t be caught dead in sweatpants and slides.”

Joining the “Kate Effect” coined for the Duchess of Cambridge and the “Markle Sparkle”, “Coolidge Cool” is an unexpected sales force, coming from an actress only days away from turning 60-years-old on August 28. Leading Australian fashion consultant Marilyn Bracks, who has more than 30 years experience working with labels such as Ginger & Smart, We Are Kindred and Reem Acra, says that older women have been ignored for too long by the fashion community.

“At Australian Fashion Week you do see older models now but it doesn’t always encompass a range of styles,” Bracks said. “For years we have known that we need to be finding ways to speak to older shoppers and shoppers of all sizes but it has taken a long time to happen.”

“Television is really leading the change. Along with Jennifer Coolidge look at Jean Smart in Hacks. These are glamorous, stylish women and there are plenty of older Australian women, with money, who respond to that.”