As rain pelted the London streets, Stephanie Hains and Christian Nilsson were scaling an iron gate at 2 a.m. The two, who met on Tinder and were enjoying a first date, had found themselves locked into Hyde Park.

The couple had connected on the app in 2014 when they had both been in Prague on separate trips, and although Ms. Hains had initially turned down Mr. Nilsson’s invitation to go out, she relented a week later when they happened to be in London at the same time.

“We walked through London all night. We both recognized that it was the best date we’d ever been on,” Mr. Nilsson said. “I offered her a complementary green card marriage if she was interested.”

Their date only concluded when Mr. Nilsson, 32, had to rush to the airport to catch his flight back home to New York. When Ms. Hains, 28, flew back home to Melbourne, Australia, the two, separated by oceans, never expected to see one another again.

However, almost immediately after their date, they found themselves frequently messaging each other. They caught up over the books they read and shared stories, eventually finding themselves talking for almost three hours over phone and video calls almost every day, despite the 15-hour time difference.

“I would stay up late so I could have lunch with her, and she’d stay up late to talk to me,” Mr. Nilsson said. “We built our schedules around those moments. After talking with her, I don’t think anybody knew me better than she knew me.”

In March 2015, Mr. Nilsson caught another international flight, but this time, he was flying to Ms. Hains. After traveling for nearly 26 hours, Mr. Nilsson was able to take Ms. Hains on a second date, which would be the start of 10 days together in Melbourne. 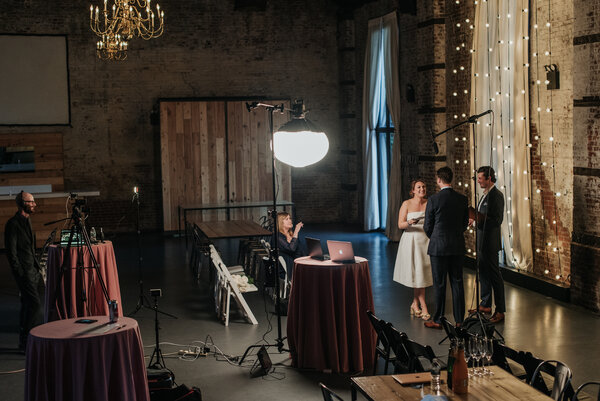 “I was so excited, but I was also scared,” Ms. Hains said. “I vomited while he was on the flight. There was so much pressure, because there was this person who I have an amazing connection with, but what if that doesn’t translate without a screen between us?”

Despite their worries, the trip went well. In fact, it went so well that what began as a late-night Tinder date quickly became a long-distance relationship spanning across the globe.

For the next three years, Ms. Hains and Mr. Nilsson were able to see each other only six times, once nearly every five months.

“We spent hundreds of hours on planes to see each other,” Ms. Hains said. “It was worth every minute.”

In 2017, Ms. Hains took a leap of faith and relocated to New York to move in with Mr. Nilsson. And in 2019, Mr. Nilsson proposed at the Naumburg Bandshell in Central Park, the backdrop from a scene in Ms. Hains’s favorite movie, “Breakfast at Tiffany’s.”

During his proposal, Mr. Nilsson played Ms. Hains a podcast he had made documenting their relationship, including personal messages from their closest friends and a recording of him asking her parents for their blessing.

As they walked through the park, Ms. Hains and Mr. Nilsson listened to the podcast he had created for her, timing it perfectly so the recording ended as the couple arrived at the bandshell. There, Moon River played in the background as Mr. Nilsson asked her to marry him.

The couple had planned to marry July 2, but because of the coronavirus pandemic changed the date to Oct. 10, at the Green Building, an events space in Brooklyn. Only Mr. Nilsson’s parents were in attendance; other guests watched via Zoom. Rob Hinderliter, Mr. Nilsson’s childhood best friend and a Universal Life minister, officiated.

“Something that’s really nice is knowing that there will be no long distance anymore,” Ms. Hains said. “We’re married, and we move as a unit. Everything with Christian has felt natural and easy, and this is no exception.”