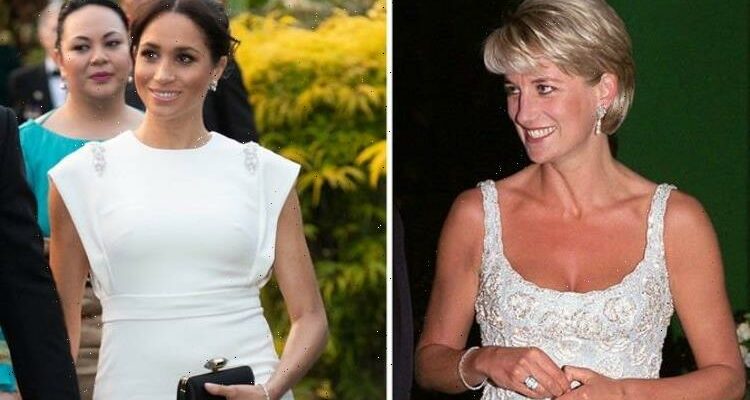 Princess Diana left her staggering jewellery collection to her two sons, Prince William and Prince Harry, upon her death in 1997. Since Prince Harry married Meghan Markle in 2018, the Duchess has been seen wearing Diana’s jewellery on several occasions. Here are four of the most memorable moments.

And Prince Harry incorporated diamonds from his mother’s jewellery collection into his engagement ring for Meghan Markle.

The central stone of Meghan’s engagement ring is sourced from Botswana, where Harry and Meghan visited in the early days of their relationship.

Prince Harry told the BBC at the time of his engagement: “The ring is obviously yellow gold because that’s Meghan’s favourite and the main stone itself I sourced from Botswana and the little diamonds either side are from my mother’s jewellery collection, to make sure that she’s with us on this crazy journey together.”

The engagement ring was altered around the time the couple had been married for a year.

The birthstones of Meghan, Harry and their son Archie are also thought to feature in the new design.

May 2018: Meghan Markle and Prince Harry get married

Prince Harry and Meghan Markle married at a beautiful ceremony at St George’s Chapel in Windsor.

The newlywed Duke and Duchess of Sussex made sure that Princess Diana was honoured on their big day, with Meghan wearing the late Princess’s aquamarine ring for her wedding reception.

As part of their royal tour, Meghan and Harry visited Suva in Fiji.

Meghan wore a diamond bracelet that belonged to her late mother-in-law for a state dinner at the Grand Pacific Hotel.

Meghan also wore the bracelet on the same royal tour while visiting Tonga.