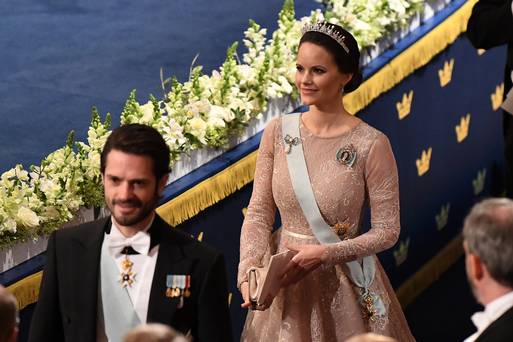 We have reached fever pitch in the global obsession with royal families.

Meghan Markle’s dazzling introduction into the upper echelons of the British royal family after just two years has been a sight to behold – and and other high-ranking blue bloods are clearly taking note of the growing appetite and renewed popularity.

For some, it’s simply business as usual, and when your business is being glamorous at all times and devoted to your country, the Swedes win by a country mile. Earlier this week, at the Nobel Prize Banquet in Stockholm, Crown Princess Victoria and her sister-in-law Princess Sofia made a splash that even Meghan couldn’t have choreographed. Victoria, next in line to the throne, paid tribute to the past by re-wearing her mother Queen Silvia’s Nina Ricci ballgown previously worn in 1995 at the same event. As expected, social media went wild.

Not far behind was Sofia, the ultimate normal-turned-royal (she is a former model and reality tv star before meeting husband Prince Carl Philip in 2010), sashaying down the steps of Stockholm City Hall in a caped red Lily and Rose gown with a diamond collar necklace and the pearl tiara she wore on her wedding day. If not for the headwear, Sofia would not have looked out of place at the Oscars, and topping best dressed list while she’s at it. Both are fluent in the impact their fashion choices have, but thanks to the rise in royal interest, their effortlessly chic wardrobes known to their country for years, are receiving global attention. European royalty fan pages are popping up aplenty across Instagram and Sofia is one of the jewels in its crown.

There was a moment in August, while attending a wedding for a close friend, that was Sofia’s first undeniable ‘wow’ moment since her 2015 wedding. The asymmetric yellow gown with a high slit made a bold statement and a thoroughly modern take on traditional wedding guest attire; while next to her, Victoria stunned in a blush pink gown with gentle floral applique. They were the antithesis of one another and it was absolute perfection.

Victoria might be the more high profile, but it’s Sofia’s adventurous streak that keeps getting column inches; a dynamic we’ve already seen between Kate and Meghan. Both women understand the importance of championing Swedish designers mixed with European brands as a whole.

Both mastered the art of maternity wear in the public eye and how to change things up on your return to public life, as Sofia did in an embellished Ida Sjöstedt maxi skirt in April, just months after giving birth to her youngest Prince Gabriel. Soon after was the pale pink power suit by Danish designer SAND Copenhagen for an event honouring graduating nurses. She mixes muted tones with bold colours, and in a gilded world of predictability, she manages to surprise every time.

Camilla Åstrand is the woman behind Sofia’s transformation from bikini model to the Duchess of Värmland, overseeing every aspect from her head-to-toe makeover. The PR director began working with her back in 2011, a year after she confirmed her relationship with Carl Philip, whom she met more than eight years ago. She recently explained how difficult it was to cope with the immense criticism of his choice of partner, the wounds of which still haven’t healed – no matter how shiny her hair is.

“It was very tough. People had comments on everything possible, on what I do and how I look,” she told TV4.

“I was met with an enormous hate storm from people who had opinions about me as a person, about my relationship. I was surprised and it definitely affected me. I didn’t understand that people had such need to express how badly they felt about me. It was very tough.”

Victoria, on the other hand, is familiar with the pressure that comes with being queen one day and aside from her dazzling recycling on Monday, is more conservative with her dress. Last month, she wore a midnight blue velvet suit in contrast to her normal uniform of knee length belt dresses, which come in block colours or bold prints. Tina Törnqvist, Victoria’s personal stylist, is pushing both the royal and the establishment to embrace more adventure with fashion.