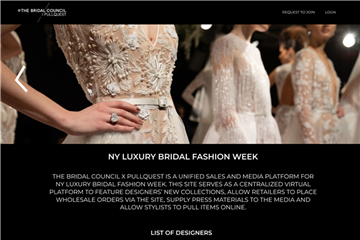 On Monday, The Bridal Council will unveil a digital marketplace for “New York Luxury Bridal Fashion Week.” Aiming to reinvigorate the market, 32 global, luxury designers and members of The Bridal Council joined together to form a unified sales and media platform on PullQuest for the week ahead.

Following March’s digital event, where a smaller selection of designers debuted collections across Zoom and Join.me technologies, The Bridal Council was optimistic about the idea of presenting live shows come October. However, the reality of COVID-19 set in and the council decided it would be safest to unite the designers and collectively show on a new digital platform.

“We chatted with four different vendors, and in the end, PullQuest ended up being the technology partner we selected because they had the flexibility to build a custom site for us that really speaks to bridal,” explained Michele Iacovelli, executive director of the council.

Long before knowledge of the CFDA’s Runway360 platform, the council’s editorial director, Rachel Leonard, and team worked with PullQuest and Natalie Meyers, the company’s cofounder and chief executive officer, to develop a practical site that took multiple industry user perspectives into account.

Iacovelli also noted that the council enjoyed working with both Meyers and PullQuest, offering a low expense, even with the tight turnaround (The Bridal Council does not have a corporate sponsor and took it upon itself to create the platform).

The site acts as the week’s main platform, launching to retailers and buyers for market week starting Monday, followed by press appointments from Oct. 7 until 9. Additionally, it will be open as a free tool — for press, retailers, and nonindustry brides alike — for the next six months.

The site centers around three main purposes. The first is to debut new collections through photo and video. The second is enabling retailers the ease and convenience to shop through virtual linesheets and digital orders; the platform also offers a task function, with the ability for users to ask questions directly to the designers’ teams. In addition, the site includes an aggregated tagging feature, which enables users to sort, view and select gowns by silhouette, fabric, etc. The search and tagging function plays directly into the platform’s third main purpose: the ability to be used by media and stylists to do editorial pulls.

Much like The CFDA’s Runway360 platform, each designer had the option to make their showroom public or private, with links to invite retailers and press (each user will be invited to register on PullQuest’s site). The platform will allow buyers, press and eventually, the public, to explore both new and established bridal designers across the globe.

“The wonderful thing is, there are 32 designers on the site that represent seven countries. In the U.S., you’ve got Naeem Khan; Canada is Ines de Santo; Temperley and Jenny Packham joined from London; in Russia you’ve got Edem Couture, and it’s the first time they’re going into the U.S. market. Lihi Hod is here from Israel, and on and on,” Iacovelli expressed. “That was the wonderful thing for us — The Bridal Council has always been focused on those luxury designers and we’ve always had global representation — we were so delighted to see global designers recognize how important the US market is for their business.”

In addition to collection videos being displayed on PullQuest, they will also sit on The Bridal Council’s YouTube page. Iacovelli added that while their team was unaware of the Runway360 platform until late August, they have recently been working with the CFDA and are encouraging designers to show on both platforms for increased visibility.

The Bridal Council hopes that come April, the live component of runway shows and showroom appointments can come back, but regardless if the 2021 Bridal Week is digital or in-person, the council is prepared to continue using the PullQuest technology as either a main platform or accompanying tool.