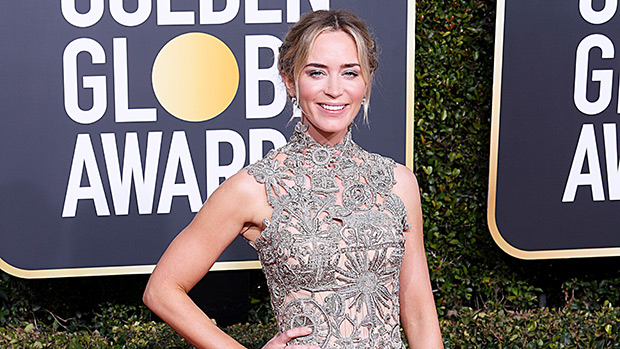 Emily Blunt, 35, arrived to the 2019 Golden Globe Awards looking regal as ever! The Mary Poppins Returns actress stole hearts everywhere in 2018 with her portrayal of the classic Disney character, and her captivating charm continues on the red carpet! The star arrived to the 76th annual award show, held on Jan. 6, in a stunning Alexander McQueen gown that featured sparkling lace detailing, and a gorgeous champagne hue. Her ethereal look needed minimal accessories, but the actress did don a pair of over-sized rhinestone earrings, the perfect touch to her dazzling look. Her strappy sandals perfectly matched the color of her dress, and Emily really knocked this one out of the park!

Her flawless fashion look isn’t the only thing Emily has going for her at the award show. She is nominated at the show this year! The actress landed herself a nom for Best Actress, Motion Picture, Musical or Comedy. The nomination doesn’t come as a surprise following Emily’s role in Mary Poppins Returns.

In 2018, Emily Blunt took a trip to Cherry Tree Lane and her performance in the recreation of Mary Poppins was met with rave reviews “Blunt is so entrancing, she makes even you believe in the impossible, tapping in to the youthful glee that many of us may have lost touch with in the turmoil of modern times,” HollywoodLife’s own Ali Stagnitta said of the film. She adds that the flick is “filled with perfectly timed songs reminiscent of the original, and amazing adventures that only Disney can take you on.”

Congrats to Emily on an unforgettable red carpet look, and her 2019 Golden Globe nomination for Mary Poppins Returns. So well deserved!