Ryan Nulty, a postie from Horsham, West Sussex, felt fine after doing his usual eight-mile round on the afternoon of Friday 12 October, before meeting his dad for a few pints. 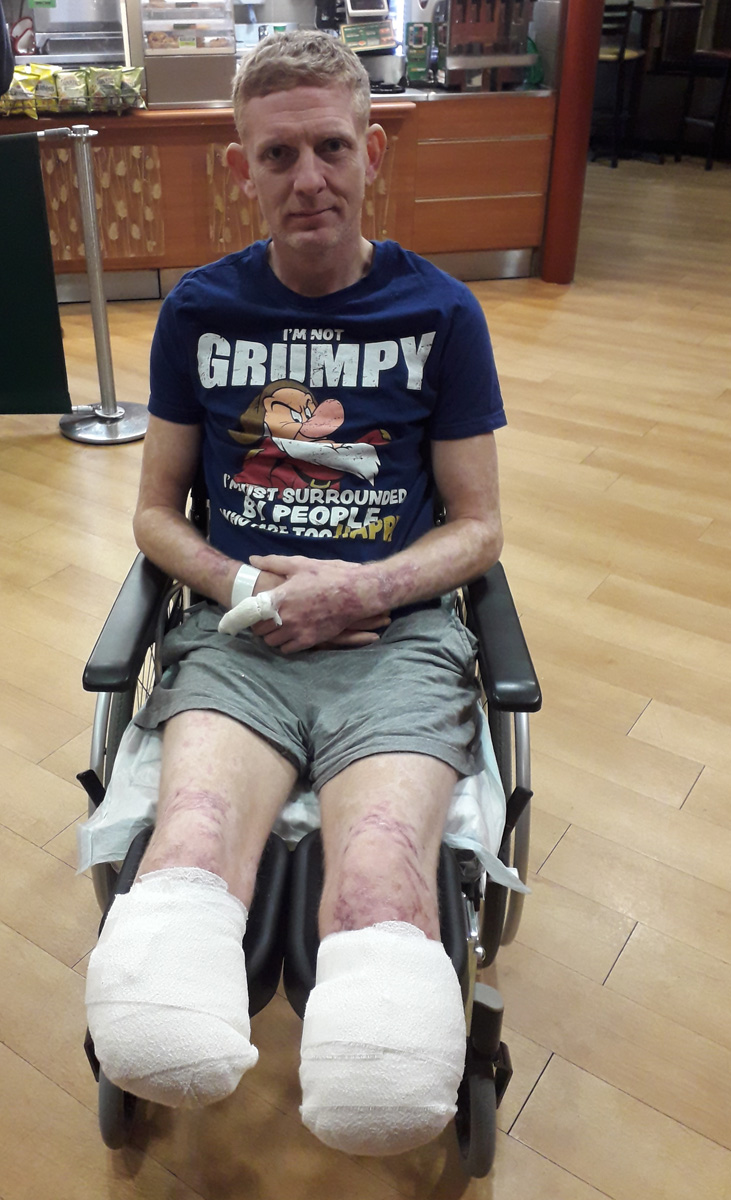 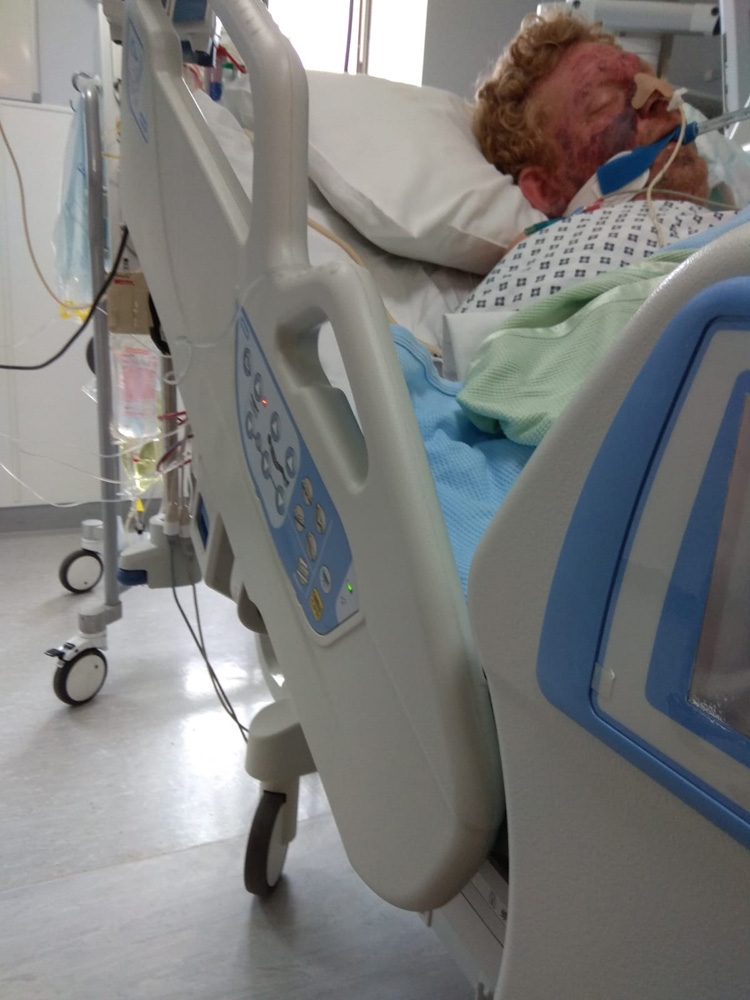 But when he woke up at 5.30am the next day, the dad-of-two found himself wracked with aching bones and flu-like symptoms.

Plagued by sweats and chills, Ryan was forced to quit his round halfway through.

"On the Saturday, I felt pretty terrible but as all men do, I just went home, ran a bath and got into bed – hoping I'd be able to sleep it off," Ryan explained.

"Then the next morning, I woke up feeling far, far worse and I remember my feet being so cold that I had to put Shaaron's fluffy pink slippers on." 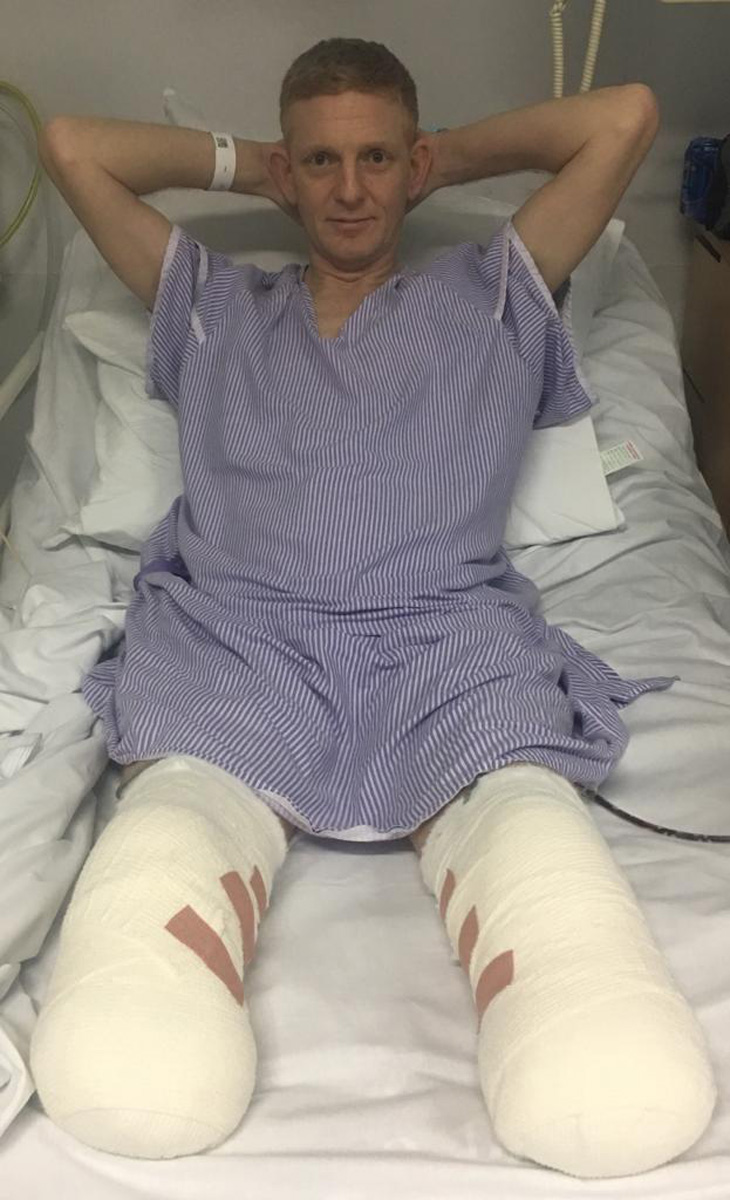 By the next day, he started to shake uncontrollably, suddenly became covered in rashes and his feet turned freezing cold – all classic symptoms of sepsis.

Realising the gravity of the situation, his partner Shaaron called an ambulence.

Ryan was rushed to Redhill's East Surrey Hospital where he was immediately put in an induced coma to help protect his organs from the infection.

He finally came to eight days later, and had no idea where he was or what had happened – as well as paranoid delusions. 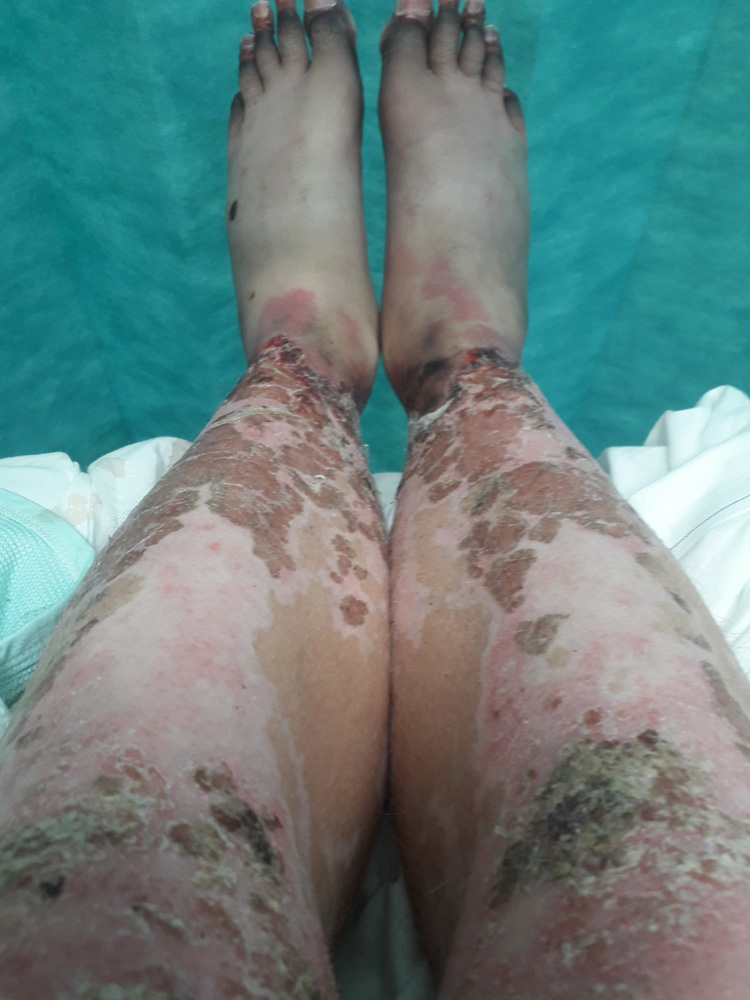 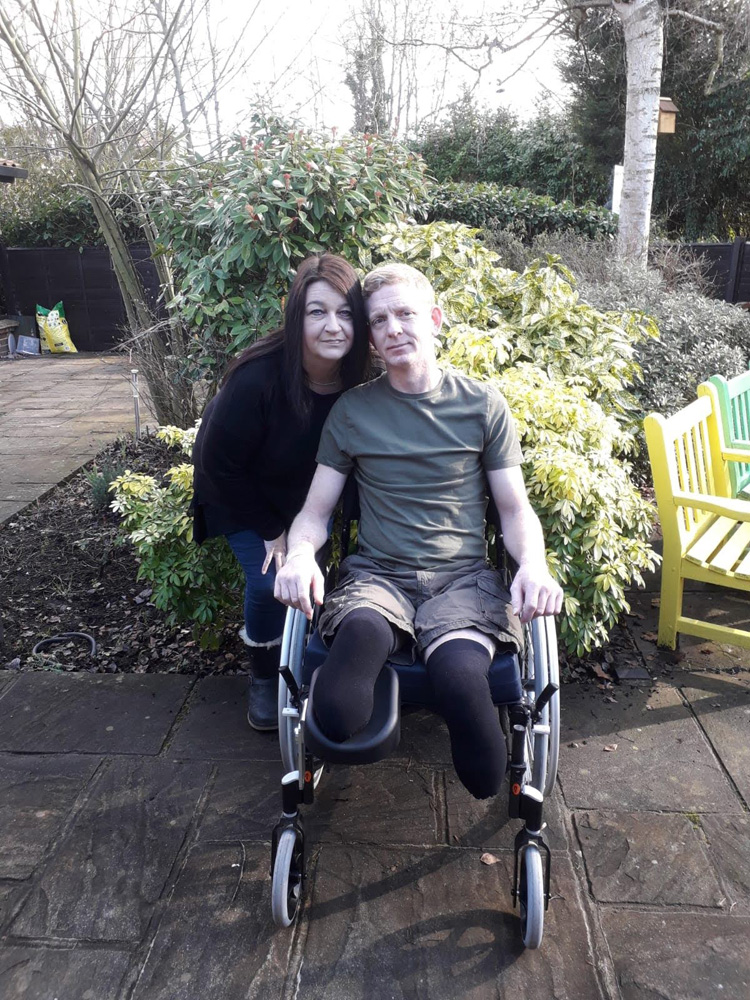 "I had all sorts of crazy ideas going through my head, like that there was some kind of big conspiracy going on within the NHS and I was there to expose it," he said.

The sepsis was still in his body and he had to be moved to a hospital closer to his home where he was given dialysis for six hours a day for three days in a bid to help his failing kidneys.

He eventually started to make an improvement from the illness, which doctors put down to a case of meningitis, which Ryan didn't realise he had. 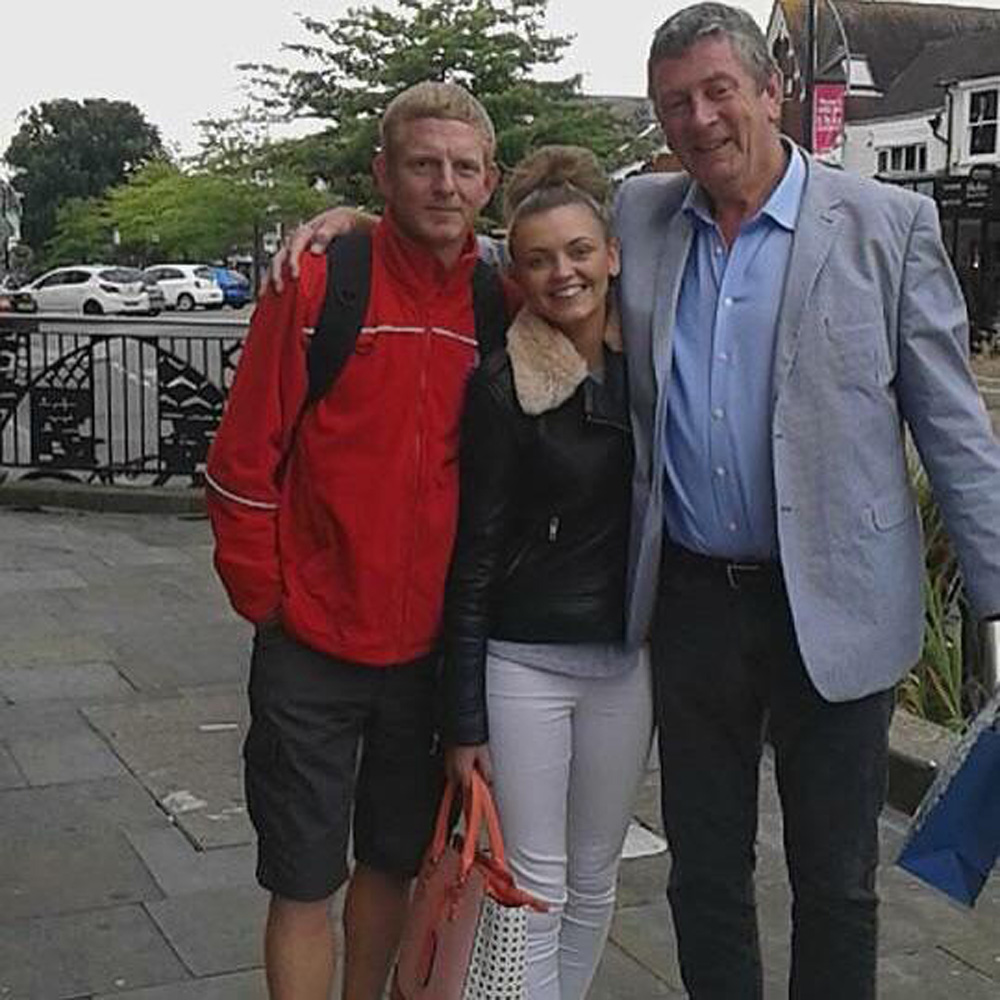 But his ordeal had taken a massive toll on his overall health.

While his body tried to fight off the infection to protect his vital organs, his extremities were neglected, and his feet were "black and leathery" due to lack of blood supply.

Docs had no choice but to amputate both feet which had developed gangrene.

According to Meningitis Now, common symptoms include:

The Meningitis Research Foundation has warned the symptoms can easily be mistaken for a hangover.

The charity urged people to look out for the symptoms in family and friends during winter, when the illness is more prevalent.

"By the time the doctors said when I was at St Helier that I'd have to have my feet cut off, I wasn't really that shocked as they were in a terrible state," said Ryan.

"Nevertheless, though, it was still distressing." 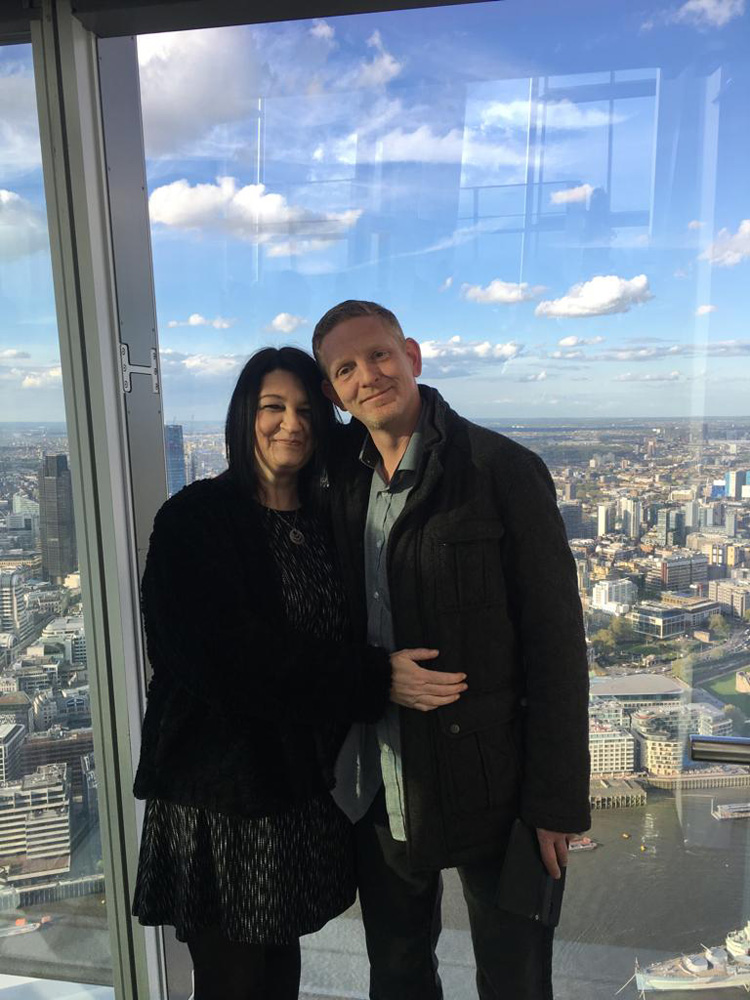 Girlfriend Shaaron even quit her job to nurse the postie back to health.

“Shaaron was wonderful,” Ryan, a postman for 10 years, recalled.

“She helped me dress, gave me baths and took me around in a wheelchair.

“Without her, I don’t know what I’d have done.”

While Ryan admits there were nights when he and Shaaron would burst into tears at the thought of what life would be like for him without feet, as the operation drew nearer, he became more accepting of his fate.

He decided that he'd be better off without his feet because they were in such bad condition.

He continued: “I called my feet my Saxon boots because they had become rock hard and they were almost totally black. The skin was like thick leather. 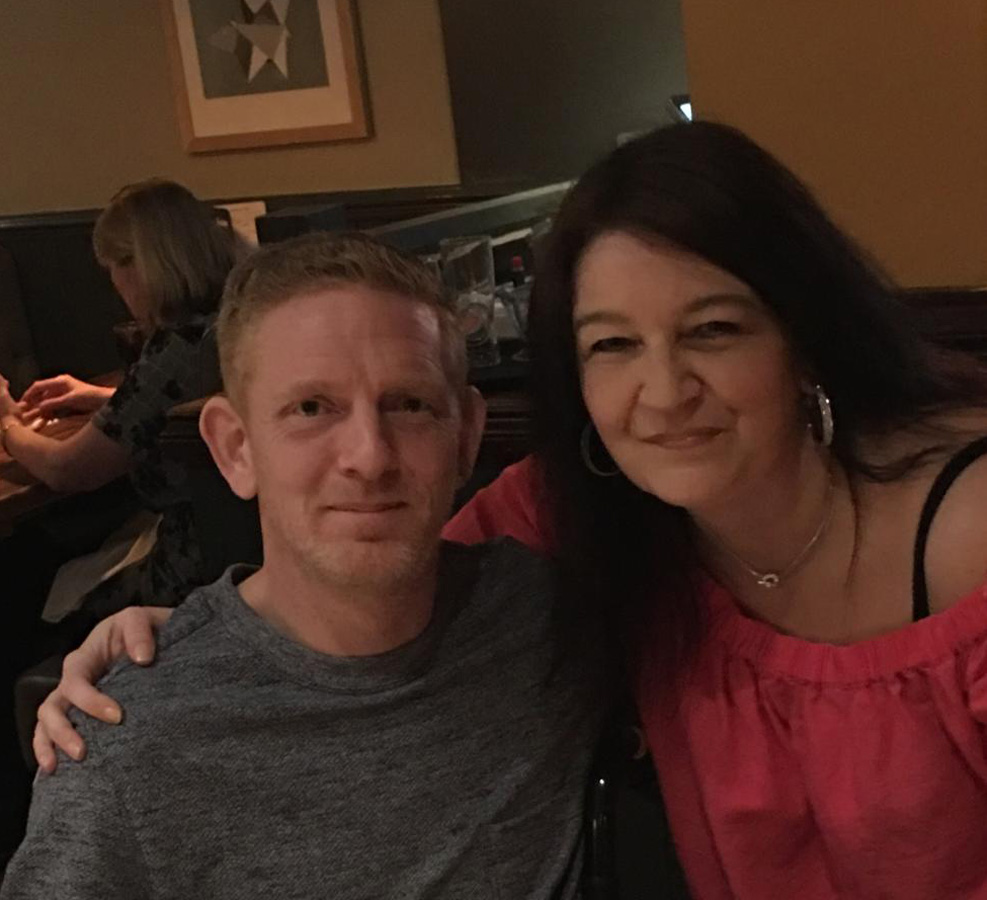 “I knew they had to go and by the time I had the operation I just wanted them off. I went into the operating theatre with a smile on my face and I came out two and a half hours later with a smile, too.

“I felt relieved, even though it was very peculiar to look down and see the space where my feet had been.”

Ryan won't be able to go back to being a postman but he does hope that he'll be able to work in a different capacity for the Royal Mail, and his family has set up a GoFundMe page to help support his recovery.

And remarkably, he's feeling optimistic about his future.

“My life has been turned upside down in the blink of an eye, but I don’t feel any self-pity or bitterness in any way,” said Ryan.

“It could really have been catastrophic, but luckily I have a loving family who supported me all the way through this.

“And Shaaron, in particular, was incredible. When a lot of partners might have turned heel, she was with me throughout.”

“It’s created a bond between us that’s stronger than I could have ever imagined, and together I feel like we’re about to embark on a new chapter of our lives. 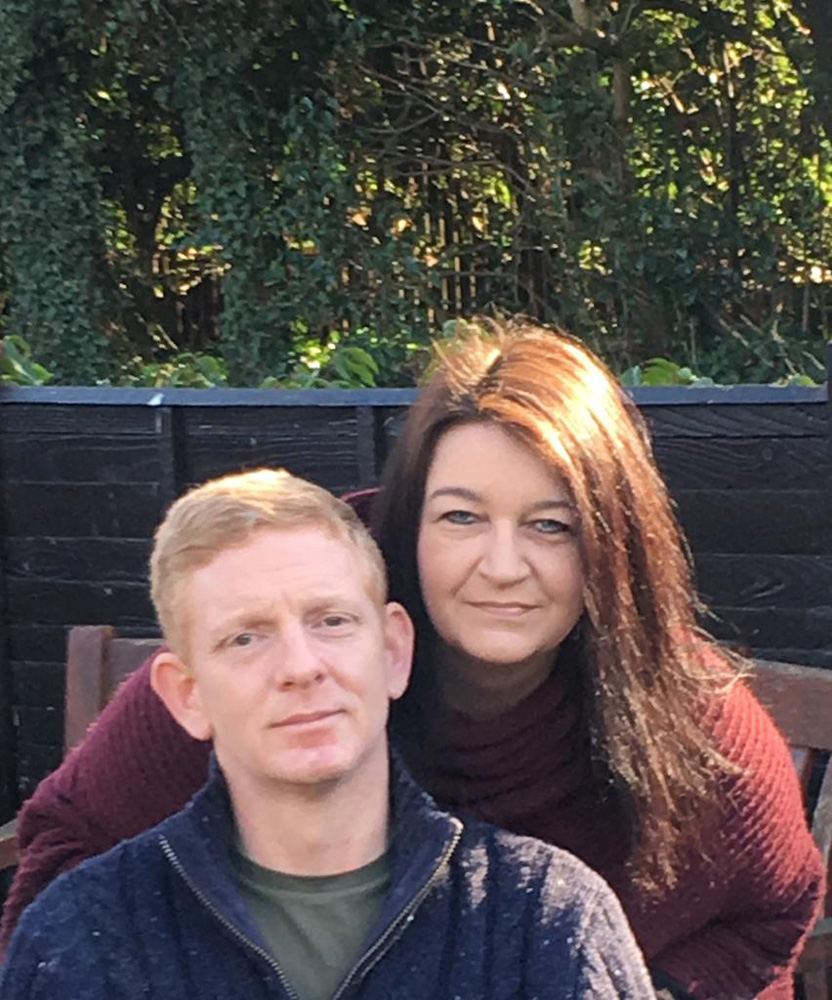 “Things may be difficult for me in the future, but I have every confidence that I will conquer it all.

“I have plans to mow my lawn this summer and take my Staffordshire Bull Terrier dog for his walk – and I intend to keep them.”

Shaaron, who was told on a number of occasions to prepare herself for the worst, has nothing but praise for her courageous boyfriend.,

She said: “I cannot describe how emotional it was to be told that Ryan may not make it – I felt like my heart was physically breaking.

“It has been humbling how brave and positive Ryan has been throughout this all. He’ been absolutely astonishing.”

The UK Sepsis Trust, a charity founded with the aim of stopping preventable sepsis deaths, commented: “Sepsis can arise in the body as a result of any infection.

“Although only about 1 per cent of sepsis cases arise from meningitis, this case demonstrates that sepsis can strike indiscriminately, at any time.

“If you or someone you know shows signs of infection it’s crucial to seek urgent medical help. With each hour that passes before the right antibiotics are administered, risk of death increases.”