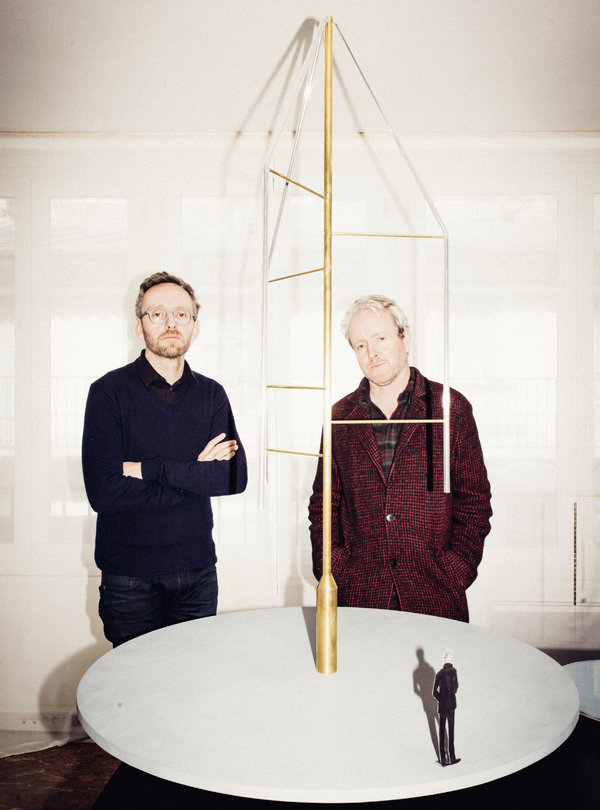 PARIS — When the colorful, fantastical fountains by Jean Tinguely and Niki de Saint Phalle were unveiled in 1983 beside the Georges Pompidou Center, many Parisians complained, saying the structures were gaudy, provocative and clashed with the adjacent gothic St. Merri Church.

Now, more than 35 years later, six new crystal-laden fountains are being readied for even more prominent placement, on the Champs-Élysées, the famed avenue that has seen months of sometimes violent “Yellow Vest” protests over economic divisions and simmering class inequities.

Designed by Ronan and Erwan Bouroullec, brothers renowned for creating strikingly imaginative high-end objects, the fountains are scheduled to spring to life late this month around the Rond-Point des Champs-Élysées, the busy traffic circle halfway between the Place de la Concorde and the Arc de Triomphe. The water is to gush downward from delicate Swarovski crystal branches atop tall, slender towers that rotate — so slowly as to be almost imperceptible. And at night, with the crystal lit from the inside, the branches and the water streams are expected to sparkle like diamonds.

“We wanted them to seem like strange apparitions, something subtle and delicate rather than eye-popping,” Ronan Bouroullec said over coffee in their studio in Paris’s Belleville neighborhood. “The challenge was to find the right balance between the historical surroundings and something very contemporary.”

The timing of the new installation, however, has raised concern. On Saturdays since November, the Yellow Vests, a nationwide movement against government policies that the protesters say benefit the elite and penalize the working class, have been occupying — and at times vandalizing — the Champs-Élysées.

“For the Yellow Vests, the Champs-Élysées is perceived as the space of the elites and of power,” said Danielle Tartakowsky, a professor of social movements at Paris 8 University.

A ring of fountains was first laid out at the same spot about 160 years ago as part of Baron Georges-Eugène Haussmann’s redesign of the city. In the 1930s, their spigots were swapped out with bird- and squirrel-shaped glass spouts by the Art Deco artist René Lalique, which were in turn replaced in the 1950s by Max Ingrand, an artist and light-fixture designer. But in 1998, crowds of soccer fans celebrating France’s World Cup victory trampled the grounds, damaging the aging spigots and some of the piping, bringing the fountains to a standstill. They remained so for the next two decades; now, 6.3 million euros ($7.15 million) has been donated by business sponsors to replace them.

The Bouroullec brothers (Ronan is 47 years old and Erwan, 42), have made their names through elegant industrial products, and their limited-edition objects are prized by art collectors. They have been commissioned to design furniture for François Pinault’s private museum being created near Les Halles, and have designed works for public spaces, including a cloudlike canopy in the Miami Design District, park benches in Copenhagen and a chandelier in the Palace of Versailles.

The fountains are the brothers’ first urban commission for Paris. “The choice of the Bouroullecs is in continuity with a tradition in France” of having designers of luxury products create items for public spaces, said Meredith TenHoor, an architecture historian and associate professor at Pratt Institute in New York.

The fountains, part of an ambitious redevelopment of the Champs-Élysées, are financed primarily by businesses with commercial interests along the avenue. For example, Galeries Lafayette, one of the donors, is scheduled to open a store there on March 28. “We feel we are making a strong contribution to the cultural and commercial ecosystem that we will soon be part of,” said Guillaume Houzé, the retail group’s head of communications.

J.M. Weston, a luxury shoemaker with a boutique across the street from Galeries Lafayette’s new store, contributed through its holding company EPI. Other donors included a Qatari sovereign fund that owns real estate along the avenue; Swarovski, which produced the crystal for the fountains; and Dassault Aviation, the aircraft maker whose headquarters overlook the traffic circle where they are to stand.

The fund-raising campaign was spearheaded by Fonds Pour Paris, a private organization that also raised money for the production of Jeff Koons’ “Bouquet of Tulips” sculpture, soon to stand in the gardens of the Petit Palais, and has commissioned Olafur Eliasson, the noted Icelandic-Danish artist, to redesign the Arc de Triomphe’s lighting.

For Pierre-Antoine Gatier, a chief architect for historical monuments who oversees the restoration of several Paris landmarks, introducing contemporary design to Haussmann’s urban layout is crucial to the city’s identity. “Paris is history,” he said, “but a city needs to be alive and in touch with the evolution of minds.”

And for all their seeming delicacy, the fountains are engineered to withstand high winds — and other objects. If hit by items thrown by protesters, for example, Ronan Bouroullec said, “the crystal would crack but not shatter.”

He said he hoped, however, that the fountains would be safe. “Fountains are joyful,” he said. “They are about childhood and pleasure; they are marvels.”