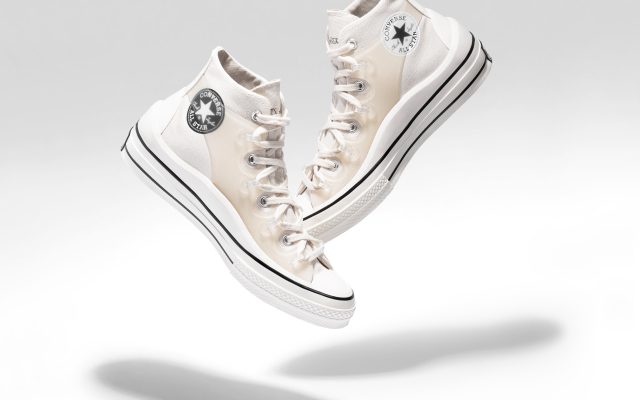 Converse and Dior Men’s artistic director Kim Jones are teaming up for their first collaboration collection, launching on April 8 on the Converse website and select retailers.

Jones describes the new collection, comprised of his take on the Chuck 70 sneaker, and apparel pieces such as a T-shirt, cargo pants, a crewneck sweatshirt and parka as “a modern version of the ‘Take Ivy’ vibe,” he said.  “I looked at the Japanese designers readapting American sportswear — recreating that ’50s and ’60s look. Obviously, Converse was the key shoe within all that stuff. Now I’m just putting it all together in a different way.”

The Chuck 70, available in white and black colorways, has been updated with a transparent TPU cage and an outsole reengineered with a diamond grip. In addition, Jones’ name is branded on the sneaker’s tongue and sockliner.

The accompanying apparel features details like a front storm flap and interior storm flap on the water-resistant parka, mesh elements and snap closures on the cargo pants.

This launch follows the debut of Converse’s collaboration with Rick Owens, a square-toe take on the Chuck 70 named the Turbodrk Chuck 70.