Dr. Valerie Mechanik, an obstetrician-gynecologist in Tampa, Fla., delivered bad news to Richard Westenberger in December 2015, just 10 days after enjoying a first date with him at a restaurant there.

“She dumped me,” said Mr. Westenberger, 60, the co-founder and president of First National ATM, a financial services firm in Tampa. “I was hurt and confused. Knowing that our first date went so well, I couldn’t imagine what I had done wrong.”

Mr. Westenberger, who is known as Rick, was in fact just what the doctor ordered on Match.com, which she made quite clear in a recollection of their first get-together.

“A quick cocktail led to a five-hour dinner, where a kaleidoscope of emotions and pheromones so enveloped us that we never noticed that we were the last ones in Bern’s Steakhouse,” said Dr. Mechanik, now 66. “Listening to Rick talk about his life, I felt an instant connection, and I was so excited about seeing him again, I couldn’t sleep.”

Each searching for a soul mate after long marriages that ended in divorce — hers 35 years, his 23 years — they were eager and ready to embark on a whirlwind romance.

Mr. Westenberger had already penned a short poem tugging at Dr. Mechanik’s heartstrings, telling how he longed to see her again: “A million moments til Sunday,” he wrote, “but days go fast, and moments, too filled with dreams of me and you chasing the sun through world’s parts setting together as contented hearts.” 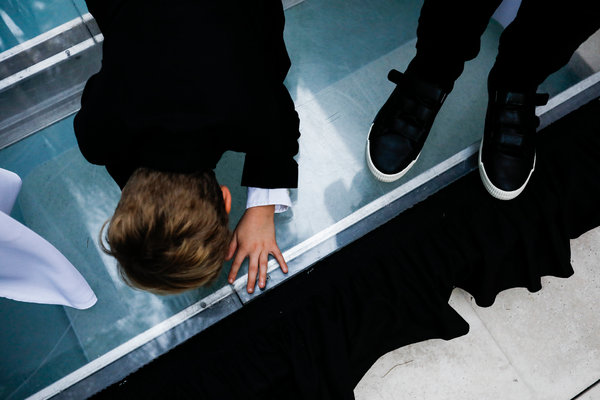 She replied immediately via email: ”Since I met you less than 24 hours ago, I have noticed all the colors of the sky, the trees, the bay as so much more vivid, heard the Christmas carols (my absolute favorite time of the year) sounding oh-so-much merrier and continued smiling so widely that my cheeks hurt, so, yes, please know that I felt that same intensity.”

The next day, Dr. Mechanik sent Mr. Westenberger another email, this one more inimical than lyrical, the words not so much tugging at his heart strings as much as they just tore. She told him she never wanted to see him again, and appeared to have a valid reason.

Unknown to Mr. Westenberger, a friend of Dr. Mechanik had urged her to conduct a background check on him “as a precautionary measure,” she said, and the findings were frightening.

She learned that the man she considered her soul mate had been an inmate at a Florida prison, having served time for a variety of narcotics-related offenses, and to make matters worse, Richard Westenberger had recently been released.

“He was a married, former narcotics dealer, and now it made sense,” Dr. Mechanik said. “Rick and his wife must have been searching on Match.com for a doctor so they could get drugs.”

“I thought, ‘Oh my God,’” she said. “And to think, I was planning to meet this sociopath at my home. I was terrified.”

But when the Mr. Westenberger she thought she knew responded to her suddenly dismissive missive with more poetry — “I’ll never write you again. I’ll never see your smile. Five hours is enough. We’ll not go another mile” — Dr. Mechanik began wondering why a felon would be so passionate about a woman he was trying to scam.

She decided to delve further into the background check and came to realize it was a case of mistaken identity. Another man with the name Richard Westenberger, but 20 years younger (and not related), was the one who had been released from a Florida prison.

“I felt terrible and immediately called Rick to explain,” she said. “The first thing he said to me was, ‘Does this mean I’m undumped?’”

She laughed and asked if he wanted to go out with her to dinner. “He said, ‘Sure, but give me a little time to get ready as I’m sitting here in my pajamas, depressed, and eating ice cream out of a tub.’”

They began dating exclusively, and five weeks later, Mr. Westenberger left his home in Port Richey, Fla., to live with Dr. Mechanik at her home in nearby Tampa.

“I found him to be strong and bright and quick and above all, funny, he always made me laugh,” Dr. Mechanik said. “There was such tenderness between us. We just knew we wanted to be together forever.”

The couple, who have five biological children between them, began bonding deeper after learning about each other’s difficult childhoods.

Dr. Mechanik was just 14 when she lost her mother, Jean Pollio Spina, to cancer in 1967. One of four children, she was left to help her father, Henry Spina, raise two younger siblings at their home in Farmingdale, N.Y.

Mr. Westenberger, whose parents are both deceased, is one of eight children who grew up in an unstable environment. His parents, Teresa Westenberger, a registered nurse, and John Westenberger, a chef who owned a luncheonette in Brooklyn, had lived troubled lives, and placed Mr. Westenberger in foster care at least three times between the ages of 5 and 6, until they were able to take him and several of his siblings back under their own roof in West Islip, N.Y., and at several other addresses around Long Island where they lived.

“From the time Rick was born, he never had anyone consistently love him,” Dr. Mechanik said. “Despite not having any role models to show him how to love and be loved, he somehow turned out to be such a loving, kind and tender man.”

Mr. Westenberger, forced to work at an early age to support himself, attended Ramapo College in Mahwah, N.J., part-time for seven years, where he majored in marketing, but did not graduate. “I simply ran out of courses I could take there on a part-time basis,” he said.

Everything the couple had to endure in their youth gave them “an appreciation of the gift of life,” Dr. Mechanik said, “a gift to be embraced and enjoyed and lived each and every day.”

They were doing just that, enjoying a shared love of music, especially Beatles music (both are admitted Beatlemaniacs), quiet dinners together, loud parties in the company of good friends and traveling to such places as Big Bear Lake, Calif., where they went hiking, and Copenhagen and Sweden and Paris, where they drank champagne while sailing the Seine River.

But just six months into their new life together, the wind had been taken out of their sails, as Mr. Westenberger was diagnosed with prostate cancer in June 2016.

“I volunteered to bail out of the relationship,” he said. “I didn’t want Valerie to live around someone who was suffering from a disease and its horrible effects, but she remained ridiculously supportive.”

Two months later, Mr. Westenberger, “with the love of my life beside me,” he said, had the cancer surgically removed and it has since been in remission.

Dr. Mechanik’s voice melted as she recalled the fear of losing another loved one to cancer.

“That was the first time Rick had been hospitalized in his life,” she said. “It was a hard thing to get through, but fortunately, his surgery was successful and his prognosis is excellent.”

Several weeks later, Dr. Mechanik read a local newspaper article about a shortage of beds for foster children in the Tampa area, some of the children, according to the article, were sleeping in business offices.

When she relayed that information to Mr. Westenberger, both knew the time was right for giving back, and since February 2017, they have welcomed 20 foster children into their homes, including three siblings, Ellen, now 8, John, 7, and Jane, 4, who stayed with them for five months before moving out to live with a relative.

The couple taught all three children to swim, ride bikes and tie their shoelaces. They took them to the zoo, museums, amusement parks and the library, where they instilled in them a love of reading books.

“Despite having raised three children of my own, having delivered 6,000 babies and having had the opportunity to save the lives of many women and babies, being a foster mother has felt like the most important thing I have done,” Dr. Mechanik said. “Rick feels the same way about the impact he has had on these children’s lives.”

Ellen, John and Jane returned for a special visit on Dec. 29, serving as flower girls and ring bearer at the couple’s wedding, which was held at their home in Tampa.

“I couldn’t believe it when they said I could be a flower girl, I was just so excited,” said Ellen, wearing, like her sister, a cream-colored sparkly dress with a flower crown. “I like being fancy and dressed up, but I also like playing and getting dirty.”

Guests began arriving late-afternoon beneath a sun that pushed aside a lingering, dense morning fog just in time to shine the last vestiges of daylight on the bride, elegant in a floor-length, pacific blue Laurel Berman gown, and the groom, dashing in a black tuxedo and bow tie with a white pocket square.

Everyone then gathered in a semicircle around the couple, who stood before Fernando A. Nunez, a friend of theirs who became a Universal Life minister for the event.

“I will kiss you unexpectedly and often,” the bride and groom vowed to each other just before their exchange of rings.

Among those present was Laura Farrell West, the friend of Dr. Mechanik who had strongly recommended the background check on Mr. Westenberger. “Truth won, and they’ve never looked back,” Ms. West said. “I’m so grateful that it worked out.”

After the couple said their vows, “Here Comes the Sun” by the Beatles began to play as their 65 guests gathered for cocktail hour.

“Valerie has the most energy of anyone I know, and what a soul mate she found,” said Eileen Goldenberg, an artist and author who is Dr. Mechanik’s best friend.

After a French-themed dinner buffet, the tables set up in the backyard were removed to reveal that some of the guests had been sitting atop the couple’s swimming pool, which was covered by a clear sheet of Plexiglass and was now transformed into a well-lit dance floor that created a walking-on-water effect.

“Rick and I realize how fortunate we are to have found one another,” said Dr. Mechanik, who was looking forward to a honeymoon that would take them to Peru and Patagonia, Chile.

“We’ve learned through all of the ups and downs that it’s not the material things that matter and that in the end,” she said, before borrowing a line from her favorite band, “all you need is love.”

Where The couple’s home in Tampa, Fla.

Special Delivery Dr. Mechanik met her officiant, Fernando Nunez, an immigration lawyer, when his wife, Dr. Margarita Nunez was pregnant and she delivered their daughter, Karina.

Ringing Endorsements The couple purchased their rings in the Cobble Hill neighborhood of Brooklyn, where the bride’s mother was born and raised. The groom’s wedding ring was made by Lewis Williams of LHN Jewelry, and the bride’s opal engagement ring was made by Katherine Lincoln. The bride’s double wedding band is Paloma’s Melody from Tiffany’s.

Haiku Humor Two Haikus created by the bride’s young adult children were shared as part of their dinner speeches: “Gynecologist seeks tall and kind man. Must love Ro-Tel tomatoes.” Also: “She typed in her PIN on the A.T.M. of love. Transaction complete.”

A Sipping Spoonbill Guests were treated to the Roseate Spoonbill, the couple’s signature drink, which was garnished with floating cranberries over cherry-flavored 7UP, rosé champagne and whipped cream-flavored vodka achieving the pink hue of its namesake bird.

Sign up here to receive Wait —, a weekly newsletter in which Caity Weaver investigates a question in the news and pop culture.