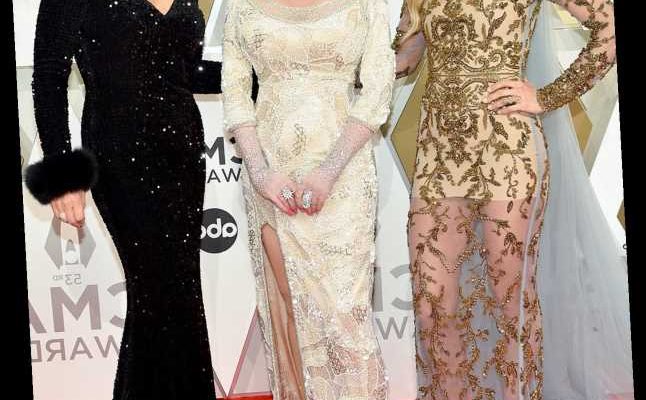 Can this please be country music’s next girl group?

Parton, 73, rocked a glam off-white glittering gown with a statement-making thigh-high slit, while McEntire sparkled in a long black sequin gown with.

“Carrie’s carpet look is full of hand beading and intricate embroidery, perfect for country’s biggest night,” Marina Toybina, who co-styles Underwood with Courtney Webster, tells PEOPLE. Adds Webster: “We love the unexpected mix of color with the seafoam green tulle and the bronze beaded details. That’s something that Carrie does so well, mixing glam and edge with femininity and sparkle.”

This year marks Underwood’s 12th consecutive appearance (though she usually hosts alongside fellow country star, Brad Paisley). The “Cry Pretty” singer, 36, is switching things up tonight by bringing her legendary friends on board for what’s sure to be a show full of female empowerment.

At a press conference last month, Underwood offered a few hints about how the show will work now that Paisley won’t be by her side.

“It’s definitely gonna be heartfelt,” Underwood told reporters, noting that the evening’s theme will be a celebration of country’s legendary women. “I love the fact that there’s a theme happening. I hope that’s kind of something that maybe we adopt for future CMAs.”

“I feel like Dolly and Reba are both so good at those one-liners that just kill,” the Grammy winner added. “I can’t imagine there not being some of those in there.”

The 2019 CMA Awards are airing live from Nashville’s Bridgestone Arena on Wednesday, Nov. 13, at 8 p.m. ET.