Carol Prisant, an elegant design writer who was the New York editor of the idiosyncratic British magazine The World of Interiors, died on April 9 at a hospital in Manhattan. She was 82.

Her son, Barden Prisant, said the cause was lung cancer.

Ms. Prisant was a former antiques dealer with no editorial experience in 1989 when she wrote to Min Hogg, the autocratic editor of The World of Interiors, a magazine she revered, inquiring about a position there as an antiques editor. It took her a week to craft the letter, with just the right tone: deferential but charming. There was no such position, but Ms. Hogg, famously spontaneous, wrote her back anyway, and offered her a job as a writer. Ms. Prisant was 51.

On her first assignment, she forgot to bring batteries for her tape recorder. Her third assignment was to write about Bill Blass. He told her she looked like Claudette Colbert. She remarked on his very “doggy” upholstery. (It was a compliment; she liked dogs.) She would go to write about the wealthy and the eccentric, and those who helped them nest.

But she never got the memo, as the longtime American magazine editor Stephen Drucker put it, that you weren’t supposed to write what you really felt in a decorating magazine.

“She told the truth, but always with subtlety and lashings of wit,” Rupert Thomas, Ms. Hogg’s successor at the magazine, said by phone, “and managed to be clever and learned without taking herself — or her interviewees — too seriously. She extracted humanity from the grandest collector and the most self-regarding decorator. And she made it look effortless.

“People think writing about interiors is easy and possibly rather pointless,” he continued. “It’s neither. She did it brilliantly.” 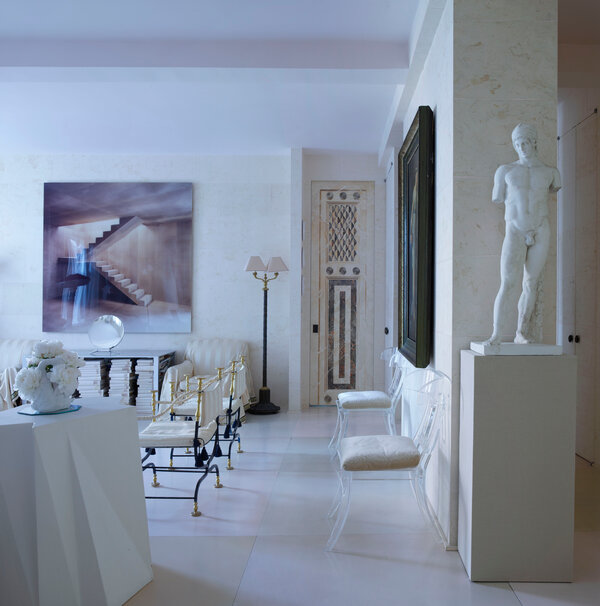 In her final article for the magazine, published in the November 2020 issue, she wrote about the Manhattan apartment of the designer and artist Nan Swid and noted how Ms. Swid’s designer, Kazem Naderi, kept futzing with the place: “He’s impatient with the obvious and stale in the relationships between furniture and art and carpet and floors, and the ultimate effect of his aesthetic process is something like Turner dropping in on a gallery where his latest seascape is already hanging and, with a small brush, confidently adding a scarlet buoy to the waves.”

Ms. Prisant could always spot the scarlet buoy in the waves.

Mr. Drucker recalled reading an early Prisant piece in The World of Interiors and cold-calling her. “I thought, ‘Who is this woman?’ I was working at Travel & Leisure, and I said, ‘I will send you anywhere you want and pay you really well and give you a big expense account.’ And she said, ‘No thank you. I hate to travel.’”

Ms. Prisant was terrified of flying. She was indifferent to food. She loved pale pink — declaring, Diana Vreeland-like, that the hue was a neutral — and she wore touches of it always (pink cashmere hoodies, pink glasses.)

Her homes were as singular and precise as her writing. With her husband, Millard Prisant, she restored a decrepit fairy-tale Victorian Gothic house in Roslyn Harbor, N.Y., on Long Island, that she painted a “bitter gray,” as she put it. It was so fanciful that birdhouses had been designed from its plans.

Ms. Prisant read a book on faux finishes and simulated wallpaper on its walls. There was a fountain on its Olmsted Brothers landscape and, on the wraparound porch, clotted with pink climbing roses, a curlicued cast-iron coffee table that Ms. Prisant had made from a Victorian stand for a child’s coffin.

When she asked the architect David Mann, a friend, to restore the place’s boathouse, he put the furniture — Chinese red wicker — on ropes and pulleys (the place flooded regularly), like the living room set in “Auntie Mame.”

“She curated her own environment like a work of art,” said Christine Pittel, a culture writer and longtime friend. “That tight control was what she needed to survive in this world. What’s compelling is the story behind the story.”

Carol Ann Lincoff was born on July 28, 1938, in Pittsburgh. Her father, Escher, owned a jewelry store in suburban Braddock, Pa.; her mother, Jeanne (Katzive) Lincoff, was a travel agent.

As a teenager, Carol loved opera, Broadway musicals and old things. She studied English literature at Barnard College, and spent one summer as an au pair for the socialite Babe Paley (whose husband, William Paley, was a trustee of Columbia University). She took in Mrs. Paley’s cool and considered elegance — the cigarette holder, the white shirts.

She also sensed something wounded in her employer’s charm, as she wrote decades later in an essay for Town & Country magazine. Those manners, Ms. Prisant speculated, “might have been a substitute for life. For Babe’s primary role was one of gracious bestowal. She struggled with or denied unhappiness and complication.”

She had attempted suicide in college and was institutionalized — which irritated her mother, she wrote later, because of the tuition lost.

In 1958, she dropped out of college to marry Mr. Prisant, a physicist from Georgia, who was part of a team at the Massachusetts Institute of Technology that designed and tested the Polaris missile. The couple lived near Cape Canaveral in Florida and in Boston before moving to Long Island in the early 1960s. Mr. Prisant loved his work and traveled often. Ms. Prisant, following the codes of her upbringing, became a homemaker, a role she suffered in.

She had anxious, perseverating thoughts about death and worried that she might kill her own child. When a driver drifted into her lane as she was in the car with her toddler son, she swerved and hit a tree, and her fears were nearly realized.

For decades, as Ms. Prisant wrote in her last book, “7 Shrinks: 60 Years in an Undiagnosed Altered State,” published earlier this year, she veered between terror and disassociation. She could put a cigarette out on the back of her hand without feeling it. And for decades she was treated with the blunt instruments of old-school psychiatry — the tropes of Freud, electroshock therapy — before receiving a diagnosis only a few years ago of depersonalization disorder, a response to trauma in which the sufferer loses her sense of self.

It’s a harrowing memoir, Kate Chopin by way of Sylvia Plath. The “underbook,” as Ms. Prisant would say, to her carefully curated life.

In 2000, Mr. Prisant died suddenly of pancreatic cancer. Ms. Prisant left Long Island and moved to a grand apartment on East End Avenue in Manhattan. It was a half-timbered showplace she camped up by painting the living room walls bubble-gum pink. The dining room was purple.

Her smaller next apartment, where she lived until her death, was very pale — and very still, as she often said — decorated in an extravagantly neo-Classical style, like a set from one of the 1930s-era films she loved.

In addition to her son, Ms. Prisant is survived by a brother, Richard Lincoff, and a granddaughter.

Ms. Prisant wrote several books on antiques; a novel, “Catch 26”; and a memoir of her life with dogs, “Dog House: A Love Story.” She had many, and in recent years spent her weekends reading — and singing — to abused dogs rescued by the A.S.P.C.A. in Manhattan. Her job was to get them used to the sound of a human voice that wasn’t going to hurt them — to help them discover, as she wrote in an unpublished essay, “over time, that the world isn’t threatening.”