Celebrity fashion is where some of the biggest entertainers rock runway masterpieces in the everyday world. Cardi B is one star who’s never hidden her love for fashion, nor does she try to be discreet in her style choices. The rapper recently wore ’90s style double decker sneakers and they’re an indication that she doesn’t have any plans to stay under the radar in the fashion world.

It seems as though Cardi is pulling out all the cool girl looks to celebrate her five Grammy nominations. No one would blame her for sporting all this futuristic drip. The rapper took to Instagram on Wednesday to show off her new swag. She wore a bright orange two-piece quilted sweat set by designer Shane Justin, but south of Cardi’s ankles was some mind boggling footwear designed by fashion label Dsquared2.

The shoes look like something that came out of a modern-day version of Zenon: Girl of the 21st Century. Upon closer inspection, they give off the illusion that there’s one sneaker stacked on top of another, although separated by a small heel. It’s as if the two morph into one single ’90s sneaker monster.

Just when you thought you’d seen it all in fashion, these duplex dad trainers pop up on your explore page. To be honest, sneakers may never be the same now that these sneaker boots (?) have made their presence known.

In all fairness, these technically aren’t sneakers at all. According to Footwear News, the Dsquared2 shoes are actually named the Giant Heeled Ankle Boot. Cardi’s definitely got the connect as these aren’t even out on the market yet, but will launch as part of the Dquared2 Spring ’19 line along with a multicolored version. You can just imagine what they’ll go for.

After posting the photo, Bardi fans were definitely stumped and confused by her footwear.

"Cardi send a video with you walking in these things….I need to know….my head hurts," another wrote.

If Hollywood ever decides to make another installment of Back to the Future, Cardi’s look definitely needs to make a cameo appearance. 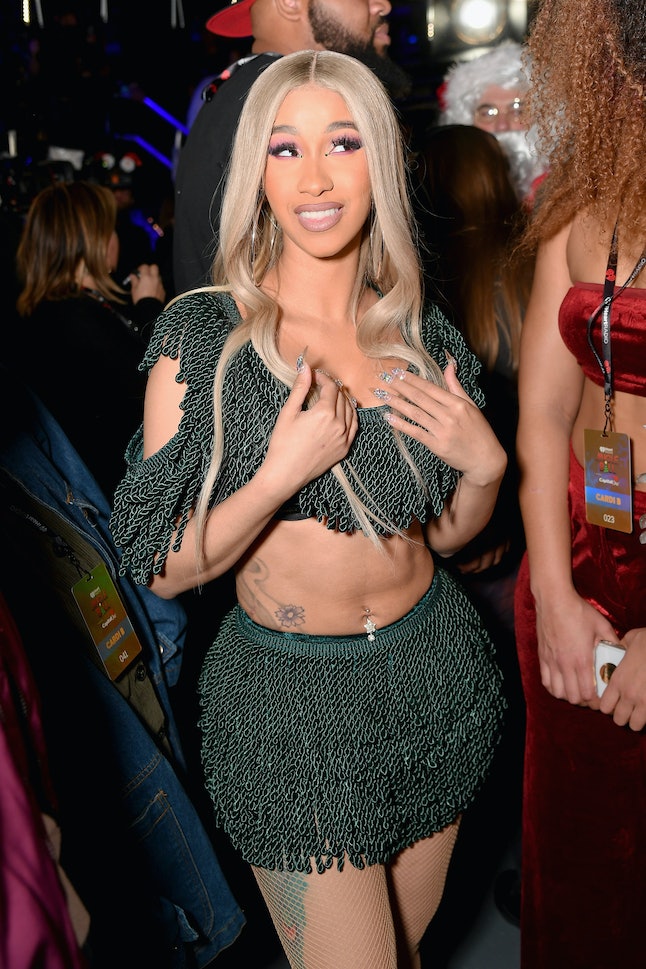 Although the Bardi Gang may be confused by the sneaker stacked boots, it’s definitely not a first for them witnessing their queen wearing something so other worldly.

Back in September of this year, Cardi made her way back to the spotlight in Paris in a Christian Cowan feathery purple jumpsuit to match with the "I Like It" singer’s purple hair. 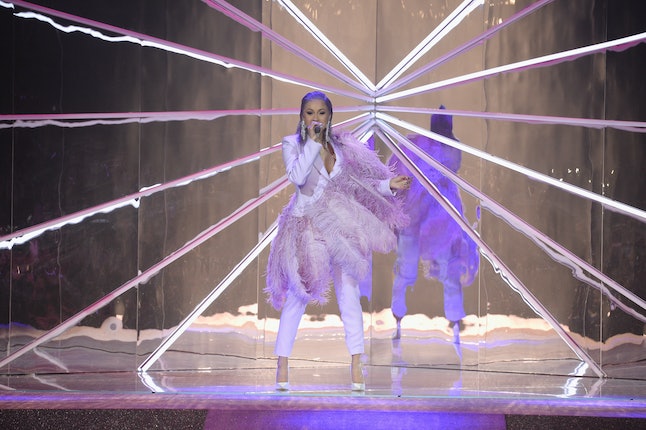 On the flip side, while Cardi may love the finer things in life, she’s also been known to shock fans by debuting some of the most affordable finds. For example, earlier this year in January, she became an eyelash icon, repping Kiss Lashes for her first time attending the Grammy Awards. She even rocked a simple floral dress from Target that was only $20.

There’s no doubt Cardi B can rock some of the most wild pieces the fashion runway has yet to debut, but somehow she’s able to walk the line of luxury and affordability seamlessly. Not to mention, she walks it in high heels.