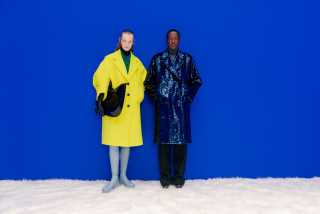 TILL SEPTEMBER: Italy’s Camera della Moda on Thursday evening issued a rough draft of Milan Fashion Week’s calendar, running Sept. 21 to 27 and presenting men’s and women’s spring 2022 collections. The schedule sees 42 IRL shows out of 61 in total. Roberto Cavalli, under the creative direction of Fausto Puglisi, Moncler and Hugo Boss are returning to the calendar, and also, for the first time, brands MM6 Maison Margiela, Luisa Spagnoli, HUI and Vitelli will present in Milan.

The We Are Made in Italy (Black Lives Matter in Italian Fashion Collective) show will kick off the week on Sept. 22, followed by, among the most established brands, Antonio Marras, Fendi, Alberta Ferretti, No. 21 and Jil Sander. All of the above, except for Marras, are set to be IRL.

The final calendar is expected to be released on Sept. 7, when the chamber will hold a press conference to present it.

The Camera has not yet addressed whether attendees will have to show the “Green Pass” that has been approved by Italy’s government, which is dealing with rising cases of the Delta variant as are other European countries. This allows citizens to enter schools, bars, restaurants, cinemas and other indoor venues because it certifies they have been vaccinated, have resulted negative to a test or recovered from COVID-19 in the previous six months.