“Too much?” said Larry Krone, a costume designer.

“I don’t think there’s anything that’s too much,” said Bridget Everett, his model, muse and client extraordinaire.

On a recent sunny afternoon, they were standing in Mr. Krone’s kitsch-crammed studio in the East Village of Manhattan, which doubles as the headquarters of his label, House of Larréon. Mr. Krone was fitting Ms. Everett, the actress, comedian and off-color cabaret sensation, for one of her December engagements at Joe’s Pub with her band, the Tender Moments.

The dress was a red-sequined tribute to the Bob Mackie flame gown that Tina Turner wore in the 1970s. Mr. Krone and Ms. Everett like to name their looks, and this one was a lewd riff on “River Deep, Mountain High.”

Ms. Everett had arrived at the studio, a riot of street furniture finds, vintage glassware and gaudy fabrics, looking somewhat less glamorous. Beneath a puffy winter jacket, she wore a pink tank top and sweatpants. She abstains from bras onstage, but this afternoon she wore a sensible black one.

Bras, it turns out, are part of her daytime look. “That tank top would be kind of vulgar without one,” Mr. Krone said.

“That’s not a problem for me,” she said.

Her entourage consisted of a gray-and-white Pomeranian, Poppy Louise Mandrell Everett, who sat queenlike in her pet carrier and occasionally deigned to lap water from a goblet. “You’re the good girl, Poppy,” Ms. Everett said.

For this fitting, Mr. Krone had provided a spread of Fritos, crudités, M&M’s and artichoke dip, which Ms. Everett nibbled sparingly. She chugs chardonnay during her cabaret act, but here she stuck to seltzer and coffee. 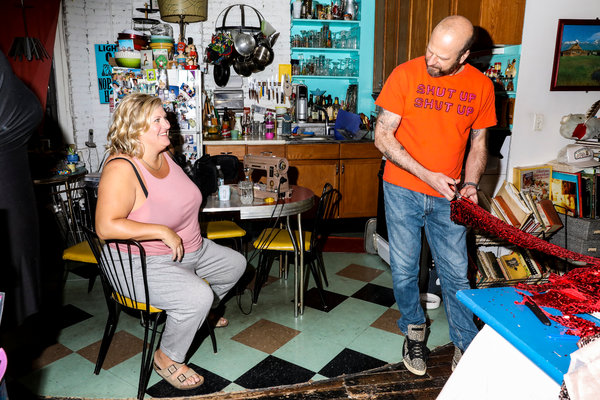 Mr. Krone lightened the coffee with almond milk, which clumped ominously. She decided to take it black. “I just don’t want to run the risk,” she said. “I have to do ‘The Tonight Show’ later.”

Ms. Everett was going to promote “Camping,” the HBO cringe comedy, in which she plays Harry, the owner of a campsite. “Harry’s like the opposite of me,” she said. “She’s a gun-loving lesbian who says whatever is on her mind. But we found a middle ground, because Harry also doesn’t like to wear a bra.”

Would Ms. Everett be wearing one of Mr. Krone’s designs to “The Tonight Show”?

“She has to relate to the people,” Mr. Krone added, sighing.

House of Larréon — glitzy, gleeful, sexy and sleazy — is not so relatable, which is how Ms. Everett likes it. She and Mr. Krone met in 2004 on the outer fringes of the cabaret scene. Mr. Krone made his own outfits, and in 2010 Ms. Everett asked if he would make one for her, too. He agreed.

“I definitely was inspired by Bridget,” he said. “I also definitely felt like her looks could use some improvement.”

At the time, Ms. Everett was wearing a lot of outfits by House of Deréon, the line started by Beyoncé and her mother, Tina Knowles, in 2004. “House of Larréon,” a wordplay on Mr. Krone’s given name, was a joke that stuck.

In the early days, Mr. Krone would shape the dresses while he and Ms. Everett were drinking and hanging out. The process now is a little more sober. Also, she pays him in cash instead of beer.

After coffee and some chitchat, Mr. Krone removed the gown from the dress form, which had been altered to mimic Ms. Everett’s bust. Ms. Everett took the dress, sequins susurrating, and slipped behind a corner to try it on.

“Ooh, that’s too short,” Mr. Krone said when she returned. An inch or two higher and her Jaclyn Smith briefs would have been on full display. “I’m glad I wore a full underpant,” Ms. Everett said.

Also, the sleeves needed more shredding and the neckline didn’t plunge low enough. Ms. Everett is a celebrant of the female form. She has a song that is to breasts what James Audubon’s paintings were to birds. For her look, plunge is key.

Ms. Everett slipped back into her tank top, and Mr. Krone went to work, attacking the dress with a seam ripper and then with his bare hands. “I’m just tearing it,” he said. Sequins littered the floor like so much sparkly blood. “This will look much better from a distance,” he said.

He made another cut and said, while cackling, “This is going be good.”

Mr. Krone mentioned other clients, including Kathleen Hanna and Dawn Landes, who are musicians, and Neal Medlyn, a cabaret performer.

“But would you say you have a muse?” Ms. Everett said mischievously.

“Actually, I don’t,” Mr. Krone said with a tease. Then he relented. “Bridget has made me realize what a muse actually is. These designs would not exist without her. They just happen when we get together.”

After Mr. Krone relaxed the seams and added mesh inserts, Ms. Everett tried the dress on again. The sleeves swirled, the sequins shivered, the skirt had a little more give. “Oh yeah!” she said. “I’m liking this. I feel messy!”

Mr. Krone circled her with the shears, shredding the sleeves higher. “It needs more skin,” he said.

Ms. Everett changed back into her street clothes. She realized the curtains were open. The neighbors were getting an impromptu peep show.

“Do you want me to close them?” Mr. Krone said.

“Too late now,” Ms. Everett said. “They’ve got to learn about life sometime.”

Offstage, Ms. Everett isn’t usually so libertine. She doesn’t really date, she said. At one point she tried to join Raya, the dating app beloved by celebrities. The site wouldn’t take her (though it later invited her to join, after she spoke about the rejection publicly). “This is the first step I’ve made toward dating in a long time and they’re shutting me down?” Ms. Everett said. “I was like, ‘I’ll just go back in my cave.’”

Despite “a little action here and there,” she said she is single. “If somebody’s looking for a six-foot-tall cabaret wildebeest with trim ankles, your dreams are about to come true,” she said.

Mr. Krone, who had been adjusting the dress’s neckline, presented it to her for a final fitting. Ms. Everett returned and struck a pose. “I like the drama,” she said. The dress was a touch clingy and the fringed pieces caught the light, churning like an elegant carwash.

She turned to her fashion arbiter. “Do you like it, Poppy?” Poppy stuck her head out of the carrier and nodded enthusiastically.