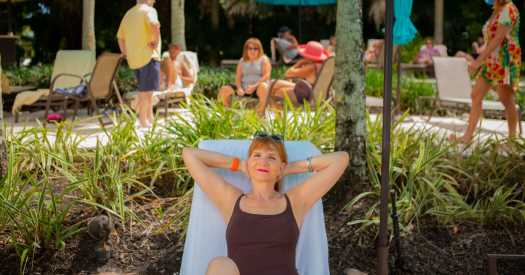 In a glimpse of our post-pandemic world, the Centers for Disease Control and Prevention recently set forth guidelines for vaccinated people. Among other things, they can hang out indoors and mask-free with small groups of other inoculated people.

But you don’t need to tell that to the 6,000 older residents of Boca West, a 1,400-acre “residential country club” in southern Florida that attracts the 65-plus set.

On a recent 80-degree afternoon, four retired women, wearing full bathing suits and sandals, were laughing and drinking daiquiris, mai tais and other fruity cocktails at Splash, the poolside bar and restaurant. A crowd gathered for happy hour on the central lawn, where a pipe band played cheerful jigs and waiters refilled martini glasses.

A short walk away, under a large tent decorated with chandeliers, a band performed Frank Sinatra favorites as couples in their 60s to 90s, dressed in slacks and floral shirts, danced the fox trot and jitterbug. 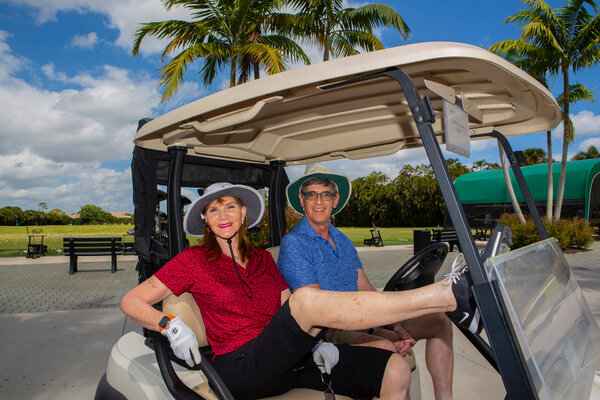 Neena Florsheim, a resident in her mid-60s, might have hit the dance floor, but she was busy preparing a dinner party — her first in more than a year — for eight people in her contemporary three-bedroom home at the Cove. She opened the expandable dining table, set out an assortment of Dr. Brown’s sodas and liquors, and ordered Chinese food.

“We went through so much glassware, good thing I have two dishwashers,” said Ms. Florsheim, who got her second Pfizer shot on Feb. 1. “We’ve been rocking and rolling for a few weeks now.”

Boomers are bringing back the Roaring Twenties, reviving the party scene across the country. With nearly 50 percent of Americans 65 and over fully vaccinated, according to the C.D.C., they are attending house parties, venturing to bars, hosting wine socials and having sleepovers. Stuck indoors at home for much of the last year, they are basking in their newfound freedom, as if on (a very mild) spring break.

“We were high as a kite getting ready,” said Martha Stoodley, 76, a retired management consultant and yoga teacher in Muskogee, Okla. After getting her second Moderna dose on Feb. 12, she waited a few weeks for the immunity to kick in. Then she invited some yoga students over for a wine and cheese party. “No one could come unless they were double vaccinated,” she said. “I trusted them.”

Ms. Stoodley and her husband spent the day baking bread, making stuffed mushrooms, laying out platters of meat and cheese, and arranging daffodils and lavender from their garden. Guests were a little tentative at first. “They all arrived with their masks on, until I told them Fauci said we didn’t have to wear them and they took them off,” she said.

The party went on for hours. “It was nonstop chatting,” Ms. Stoodley said. “We were talking, comparing notes of where we want to travel, comparing notes about Covid, talking about our families, anything.”

These gatherings are a view into what social life could soon look like for the wider population. Many states have lowered the vaccine eligibility age in recent weeks, with several now offering shots to anyone 16 or older.

It should go without saying that partying is not the first priority for many older Americans who got vaccinated. Going to the grocery store without fear and seeing grandchildren are way more important. But after a year of intense social distancing and constant reminders of being at high risk, they are embracing their liberated social life with gusto.

When Elissa Fisher, 66, a retired special education teacher in Fishkill, N.Y., got vaccinated, the first thing she wanted to do was have a sleepover party with a close friend who lives nearby and whom she hadn’t seen in months. The plan was a fish dinner and a movie, but French gimlets led to bottles of wine, and before they knew it, it was nearly midnight.

“We were just laughing so much, I couldn’t even tell you about what,” Ms. Fisher said. “There were silly stories. My friend started speaking Finnish to me at some point. We would start one conversation and get distracted and go on tangents.”

Bars and clubs are also getting a boost from an older clientele.

For 15 years, John Kurtz, 79, a painter in Chicago, had been a regular at the Village Tap, an old-timey tavern two blocks from his house that makes a good burger. He used to go there maybe twice a week to chat with fellow artists or to sit alone with his sketchbook and crayons, up until the city’s first shelter-in-place order.

Mr. Kurtz counted the days after his second vaccine to return to his seat by the window and ordered a German lager. “It’s nice to get the fresh air and look out,” he said. “It was kind of nostalgic. The camaraderie is good, the food is good, the beer, you can’t mess with that. And if I had one too many, it’s easy to get home.”

The bar has become a place of spontaneous reunions. “Once the state opened up vaccines to 65 plus, we started seeing more of the older generation,” said Jeff Hoffman, the owner of the Village Tap. “They were showing each other their vaccine cards, comparing who had Moderna and who had Pfizer.”

“This one man, we hadn’t seen in a long time, and he came back to his regular seat,” Mr. Hoffman added. “He used to do tequila shots, but this time he upped his game and went for Don Julio 1942. He was so excited to be back, he ordered a round for all the bartenders.”