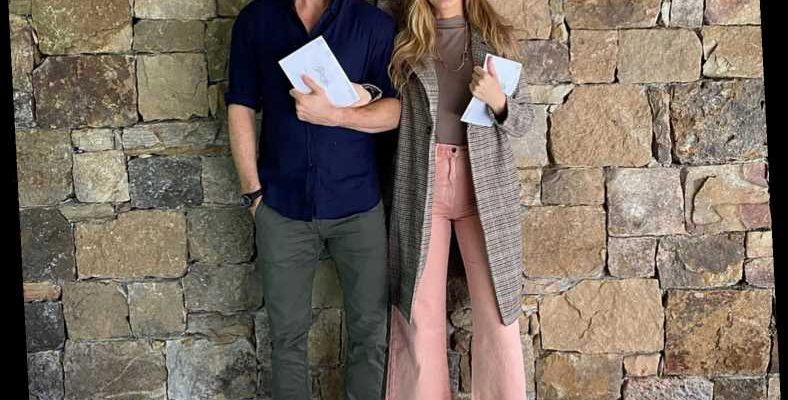 Blake Lively didn’t want to take any chances when putting together the perfect voting day outfit — even if it meant getting inventive when it came to her footwear.

As the actress, 33, cast her ballot by mail on Thursday, she showed off her sense of humor by pairing her casual ensemble with two different pairs of shoes — which as it turned out, weren’t actually real at all.

In one photo posted on Lively’s Instagram page, in which she and her husband Ryan Reynolds smile with their mail-in ballots, the actress can be seen wearing a plaid coat, a neutral-colored turtleneck and pink pants with what appeared to be a pair of brown open-toed heels. Although from far away, her shoes looked real enough, upon closer inspection, it was clear that her footwear of choice had actually been drawn on her feet.

“It was Ryan’s first time. He was understandably scared. It all happened so fast. Like, REALLY fast. He wept. I pretended to weep. Then he called all his friends,” Lively captioned the image, without drawing any attention to her creative doodle. Meanwhile, over on his own Instagram page, Reynolds shared the un-doctored image, in which Lively can be seen striking the same pose, while standing barefoot on her tiptoes.

“This is my first time voting in America. I’d like to thank my wife Blake for making my first time so gentle and loving. It was super scary at first, then exciting and now I’m a little tired. But proud. #VoteEarly,” he captioned the shot. As it turned out, that wasn’t the only design of drawn-on shoes that Lively toyed with rocking that day.

On his own Instagram Story, Reynolds went on to post another image, which showed his wife wearing a pair of clearly fake closed-toe shoes — which he made sure to highlight by drawing an arrow to and adding a question mark by.

The mother of three then went on to show of her design skills, as she posted a series of close-ups of her creations.

“@louboutinworld are you hiring? Barefoot iPhone doodler with vast experience avail,” she joked alongside one photo, adding in another, “Impressive résumé upon request.” Bringing the hilarious saga to a close, Lively playfully clarified that she was determined not to spoil the moment by committing a fashion faux pas.

“Can you tell I was so happy to get outta a onesie and vote,” she wrote alongside a solo shot of herself.

“Sure it was an absentee drop off ballot with a mask covering my look. But dammit I exercised my right to vote. And to not wear shoes that ruined my outfit,” she quipped.