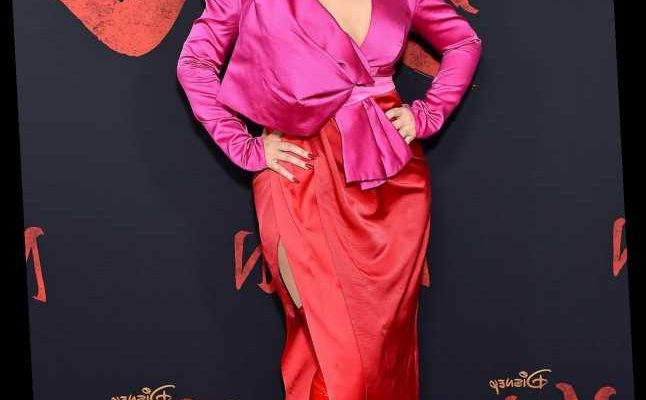 For the Mulan premiere, Aguilera took it back even more, with light eyes and her favorite bold red lip. The singer continued her somewhat toned-down streak for the 2019 American Music Awards, going with a dramatic eye paired with nude lips and cheeks. No makeup, no problem. The singer stepped out in November at the American Music Awards wearing barely any makeup, and most recently, posed on the cover of Paper Magazine flaunting her freckles.

“I’m at the place, even musically, where it’s a liberating feeling to be able to strip it all back and appreciate who you are and your raw beauty,” she said. Before embracing a more toned-down look, Aguilera debuted some of her most daring beauty looks — like this purple hairstyle — when she was a judge on The Voice. One look she’ll never let go of: classic, Old Hollywood-style side-swept hair paired with a bold red lip and tons of lashes, which she rocked often during her Moulin Rouge era. During one of her many hair changes in 2016, Aguilera swapped her blonde hair for a bold shade of auburn, a hue she complemented with a red lip to perform at the “Hillary Clinton: She’s With Us” concert. Bright colors have never been out of the star’s reach — like the time she matched her hot pink highlights to her pink lips on The Voice. No matter how far she takes her looks, she’ll always revert back to a classic look. A short, chin-length golden blonde bob made its way into her ever-changing hairstyle rotation, marking one of her most drastic cuts to date. Sticking with her white-blonde hue, the pop icon paired her ringlets with even shorter, choppy fringe. The singer loved black eye liner so much by 2003 that she dyed her hair to match. In 2001, a blonde braid-accented afro was basically a “casual” look for Aguilera. Her “Dirrty” braid phase lasted almost a year. The singer rocked small, multicolored braids, similar to the look she wore in the hit song’s music video. Say hello to the reason black eye liner and spray tans became a thing in the new millennium. Before she discovered crimpers and liner pens, Aguilera wore lavender eye liner and her shiny blonde hair in a shoulder-length lob.