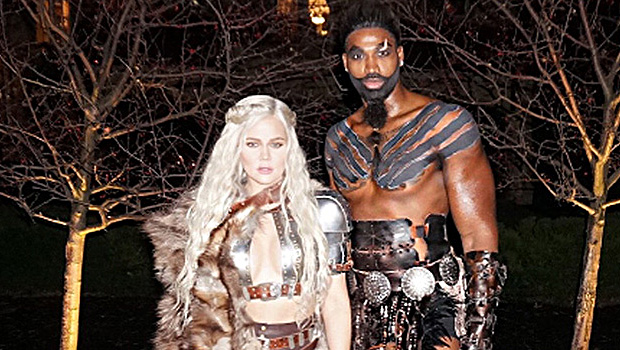 Thinking of being Daenerys Targaryen or Jon Snow for Halloween this year? Check out our gallery of the best celebrity ‘GoT’ costumes for inspiration!

Game of Thrones won’t return to HBO for its eighth and final season until 2019, but we’ll likely see the characters around much sooner. People have been looking toward the iconic characters for costume inspiration ever since the series began in 2011. Even celebrities like Kristen Bell, Khloe Kardashian, and Ansel Elgort aren’t immune to the allure of a Daenerys Targaryen or Jon Snow costume.

In 2017, Khloe teamed up with boyfriend Tristan Thompson for a few different couple’s costumes, but their Dany and Khal Drogo outfits were the best by far. Despite being pregnant at the time with True Thompson, Khloe bared her stomach in a brown leather skirt and a crop top made of silver armor. She topped off her look with fur accents and a long platinum blonde wig. The NBA player nailed his own GoT costume which consisted of body art and armor.

The Keeping Up With The Kardashians star took the theme a step further by using Khal and Dany’s iconic pet name as an Instagram caption. “Moon of my life,” she captioned a photo of her and Tristan kissing while in full costume.

Kelly Ripa must be a major GoT fan because she’s drawn inspiration from the show not once, but twice. She and Michael Strahan rocked Dany and Jon Snow costumes for Halloween in 2014 on their talk show Live With Kelly & Michael. Then in 2017, the talk show host teamed up with Michael’s replacement, Ryan Seacrest, for some spot-on Cersei and Jaime Lannister costumes during their Halloween episode of Live With Kelly & Ryan. Kelly is truly the Khaleesi of Game of Thrones costumes!

If you’re still scrambling to find a Halloween costume, you’re a major GoT fan, or you just want to see how your Khal Drogo look measures up, check out the gallery above!