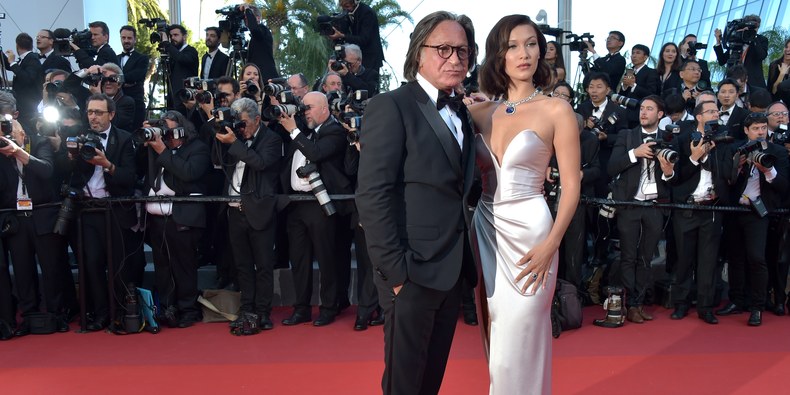 Mohamed Hadid, perhaps the proudest dad in all of fashion, will no longer have to chase his children around the globe to keep an eye on them (or vice versa). Over the weekend, he debuted an Hermès Birkin bag painted with a larger-than-life version of Bella Hadid's eye, giving brand-new meaning to the term "serving looks." Though it wouldn't exactly be surprising if the French designer introduced a Bella-inspired line of accessories, following in the footsteps of Bulgari, Nike, and many more, Hadid's new carryall appears to be a custom design.

The Hadid family patriarch shared his latest acquisition on Instagram on Sunday evening. Per his post, the black python-skin Birkin features his youngest daughter's "Magical Eye" daubed on with acrylic paint. Bella's blue-green eye is painted in the lower left-hand corner of one side of the bag, and made to look as if the supermodel is peeking out of a hole ripped straight through the leather — to not-at-all terrifying effect. The all-seeing eye is surrounded by pale yellow flowers on twisting, leafy vines, and the entire design has been "treated and varnished," according to Hadid, guaranteeing that Bella will stare out from the bag, unblinking, long into the future.

Hadid neglected to reveal the artist behind the bag in his post, opting only to tag Bella in the photo and add "#Hadid" and "#HadidArt" hashtags to his caption, so it's anyone's guess who is responsible for the bold design. The real estate developer may have put paintbrush to python himself, handed over creative duties to an up-and-coming artist on Etsy or Instagram, or, perhaps most likely of all, tapped Bella's older sister Gigi, who's previously professed a love of "doing art."

Alternatively, there's a chance the bag could have been commissioned from notorious Birkin painter Candice Bergen. Canvases for these "BergenBags," as the Murphy Brown star has wryly labeled her work, are typically confined to Hermès and Louis Vuitton designs (provided by the commissioner); Bergen uses paint pens to doodle animals and initials on the bags, requesting donations to the ASPCA or NRDC in lieu of payment for each masterpiece. But while painting on a priceless leather bag — Birkins often go for hundreds of thousands of dollars at auction — certainly fits Bergen's M.O., her BergenBags side gig has, unfortunately, been on a "winter hiatus" since the end of August. So, unless Hadid has an exceptionally close relationship with the actor-turned-artiste, he likely had to look elsewhere for his custom design.