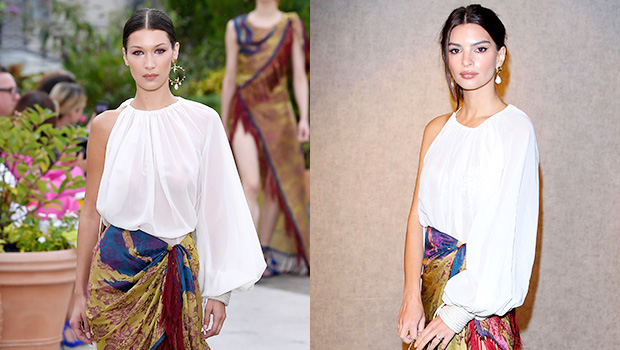 Emily Ratajkowski was spotted in the same Oscar de la Renta look that Bella Hadid showcased on the runway in September. See how both models looked in the same ensemble!

Emily Ratajkowski just blew us away with her latest look. The model, 27, wore an Oscar de la Renta Spring 2019 ivory one-shoulder blouse featuring a rope cuff, which she paired with a draped floral-printed wrap skirt with fringe detailing by the same label. Ratajkowski looked radiant in the outfit as she attended The Wrap’s Power Women Summer in Los Angeles on Nov. 2.

The Gone Girl star styled the look with gold and white drop earrings, a snakeskin purse, and gold sandals. Ratajkowski pulled her center-parted hair back into a bun, leaving a few pieces out in front. Her beauty look consisted of winged eyeliner, a peach blush, and an apricot colored lipgloss.

This isn’t the first time we’ve seen a supermodel sport this exact ensemble, though! Bella Hadid donned the exact same top and wrap skirt when she walked in Oscar de la Renta’s show at New York Fashion Week on Sept. 11. Hadid’s look was rounded out with a detailed hoop earring on one ear and strappy silver and red heels.

While these two looks were accessorized differently, both Hadid and Ratajkowski stuck to a similar beauty look. Like Ratajkowski, Hadid’s hair was center parted and pulled back, albeit into a low ponytail instead of a bun. Hadid’s locks were more polished though as not a single hair was out of place. Hadid’s eyeliner was also winged and she had on a similar shade of lipstick. As opposed to a soft peach blush, Hadid’s cheeks were sculpted by a slightly darker contour.