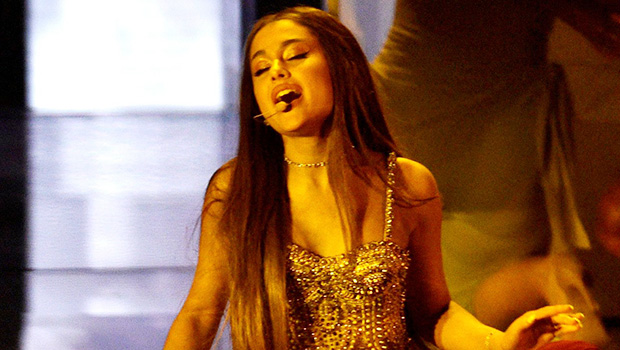 Ariana Grande didn’t go to the Grammys on Feb. 10, but she still showed off the dress she would have worn if she didn’t pull out of performing at the last minute. See the pics here!

Ariana Grande, 25, famously pulled out from performing at the 61st annual Grammy Awards on Feb. 10 after a disagreement with producers over her set list, but that didn’t stop her from modeling the Cinderella-like gown she would have worn if she attended. “When @zacposen makes u a custom gown it doesn’t matter if you’re singing or not 🌫 …. thank u 🖤,” Ariana wrote alongside a photo of her posing seductively in the dress. She then went on to post a total of 4 photos, as well as a video of her dog jumping on the dress, and she looks amazing in all of the images. SEE THE PICTURES HERE AND HERE!

We were sad to learn Ariana wouldn’t be attending the Grammys. Especially because her album Sweetener was nominated for Best Pop Vocal Album — an award in which she won — but we can totally understand why she pulled out at the last minute. Ariana told her fans on Feb. 7 that her “self expression was stifled” by producers of the show, so she couldn’t attend and follow through with her planned performance. It was a heartbreaking situation, but we’re happy she still treated fans to what her red carpet look would have been! It actually reminds us of the gown Claire Danes wore to the Met Gala in May 2016 — a dress also designed by Zac Posen.

Ariana has been open about her personal life, including that tough year, for a while now, and she’s posted about her feelings to her fans on social media, leaving them feeling close to the singer. In 2018, the brunette beauty went through two very public breakups, one with Mac Miller, in May, and another with Pete Davidson, 25, in Oct., and she’s also been dealing with grief after the sudden death of 26-year-old Mac from an accidental drug overdose on Sept. 7. In contrast, one good thing that happened to Ariana in 2018 was being named Woman of the Year at the Billboard‘s 2018 Women In Music event.

Here’s to hoping 2019 is the best year for Ariana yet!