Jiordan Castle was looking for a roommate. Instead, she found love.

“We met on Craigslist. We were emergency roommates,” Ms. Castle said. In the summer of 2013, Ms. Castle posted a “seeking roommate” ad on Craigslist San Francisco, because the apartment plans she was counting on had fallen through. Jerrod Morgan, 33, responded to her ad.

“He had just moved to the city and was equally desperate for a place to live,” said Ms. Castle, 30. “We met for pizza and decided to look for an apartment together.” They found one, also on Craigslist, and moved in a week later.

Five months after moving in together, they went on their first official date. They went to Nopalito for dinner and to see “The Hunger Games: Catching Fire” because their first pick, “Dallas Buyer’s Club” wasn’t playing at an opportune time, Ms. Castle said, adding, “It would’ve been sad for a date.”

It didn’t take either of them long to know they had found their forever. “Maybe I always knew. I at least knew since the moment we met that Jerrod was going to be a fixture in my life,” said Ms. Castle, who grew up in Huntington, N.Y., and works from New York as the director of marketing for Atrium, a technology consultancy. She also wrote a book of poems, “All His Breakable Things.”

“Over the years, through our many moves, career changes, and adopting our dog Hacksaw, all my small aha moments solidified into one big yes. Yes to this life we made from scratch together.”

Mr. Morgan, who grew up in Columbus, Ohio, graduated from Ohio State and now works in New York as a program manager for Google, said the first time it really hit him that Ms. Castle was “the one” was when they were nearing the end of their first lease and knew they weren’t going to renew. “My instinct, without thinking about it, was ‘Oh, there’s no way I want to do anything else without Jiordan.’”

It was on their sixth anniversary that Mr. Morgan proposed, which came as a surprise to Ms. Castle.

“He took me up to a suite in the hotel where we’d just eaten. I was told it was to see the view from the roof, overlooking Madison Square Park, and when I realized we hadn’t just broken into someone else’s room, he got down on one knee and proposed with the world’s coolest vintage ring,” said Ms. Castle, who graduated from the University of San Francisco and received a Master of Fine Arts in poetry from Hunter College. 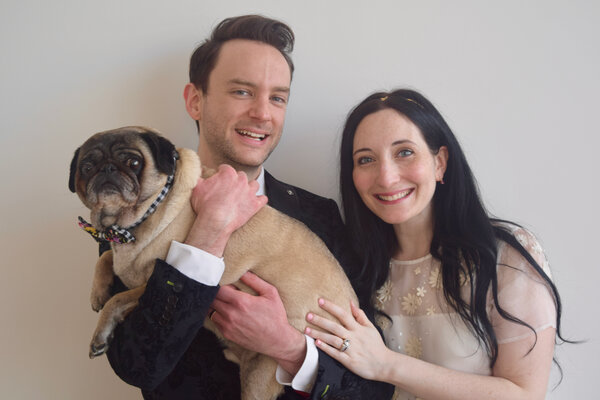 They planned a big winter wedding, for 100 guests, at Housing Works Bookstore & Cafe in New York for Jan. 29. But, because of the pandemic, they had to postpone the celebration to January 2022.

Not wanting to miss out on getting married simply because they had to push back a party, the couple decided to stick to their original date. “The party is for everyone, but the marriage is for us,” said Ms. Castle. “The pandemic has taken so much from so many of us and this felt like an opportunity to take something back — to not wait to live or to love.”

It was time for Plan C, and on Jan. 29, they were married in a suite at the Four Seasons in Philadelphia, where they also stayed. “It was incredible in terms of hospitality. They had handwritten notes for us; a photo of us turned into an illustrated Instagram post; treats for our eight-year-old pug, Hacksaw; and even surprised us after the ceremony with a whole cake and champagne.”

Laura Barry, an interfaith minister ordained through the Circle of Miracles Ministry School, officiated as family watched on Zoom.

The couple each gave Hacksaw a treat before reading their vows before only one other guest who also served as their photographer.

Scandinavia is at the top of their honeymoon list. But, Ms. Castle said: “It’s a long way off because we want to wait until after we have our party and after it’s safe to travel in general, and especially abroad. But in a way, that extends the magic too.”