Now lives: In a two-bedroom apartment in the Silver Lake neighborhood of Los Angeles.

Claim to fame: Mr. Bembury is a cult designer of opulent fashion sneakers, first at Yeezy, where he designed combat and lace-up boots for Seasons 3 and 4, and now at Versace, where his futuristic, almost Japanime-inspired designs have earned praise from tastemakers, art stars and sneakerheads. Sneakers Magazine recently called him “one of the most ambitious creatives in the footwear industry.”

Big break: Before his street-style following, Mr. Bembury designed shoes at Cole Haan and Payless ShoeSource. Wait, what was that last one? “In retrospect, it was highly informative because Payless makes every type of shoe imaginable at an inexpensive cost,” he said.

His former boss at Cole Haan, who was working for Kanye West at the time, asked Mr. Bembury to submit his portfolio. “Apparently my work was well received, and I was flown out to meet him,” he said. He was hired three months later. “Getting to work with a genius like Kanye daily was an honor and extremely educational.” 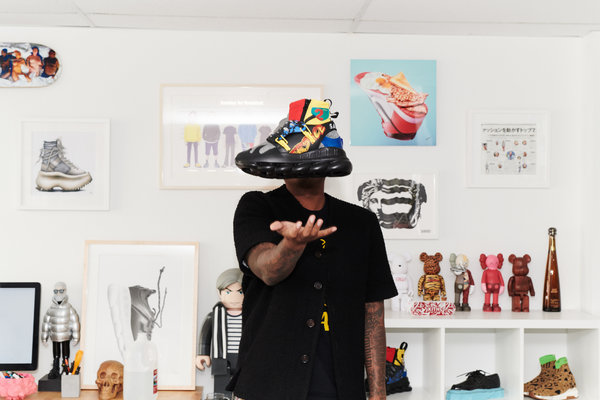 Latest project: Last month, Mr. Bembury collaborated with the artist Takashi Murakami on “Sneakers for Breakfast,” an art installation at the ComplexCon street wear festival in Long Beach, Calif. For the show, Mr. Bembury and five other designers created archetypes of their “ultimate sneaker” that plays with Mr. Murakami’s cartoonish iconography. The installation’s title comes from “the idea that even at the breakfast table we were dreaming about sneakers,” he said.

Next thing: At Versace’s pre-fall show in New York on Dec. 2, Mr. Bembury updated the Chain Reaction sneaker, which features a chunky rubber sole that incorporates Versace’s chain-link logo. “It was an effort to make a branded element functional,” Mr. Bembury said.

For his next big idea, he is toying with a homage to a pair of retro ’90s sneakers designed by Steve Jobs for Apple. “I can’t talk about that yet,” Mr. Bembury said, though he did post a prototype on Instagram. “Just wait and see.”

Forging a footprint: As a black designer at a global fashion brand, Mr. Bembury is aware he has big shoes to fill. Friends and former colleagues have offered advice. “They reminded me there are not so many people who look like me in this world of high fashion,” he said. “It’s bigger than me, and I could be paving a way.”