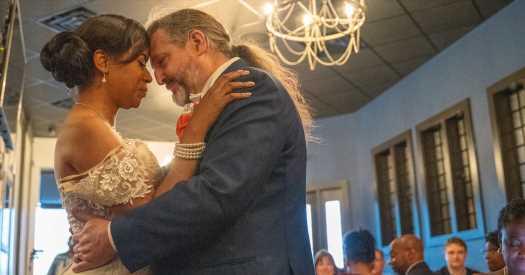 In March 2016, during a visit to the Major Hillard Library in Chesapeake, Va., Kimberlee Stevenson picked up a copy of “Until I Saw Your Smile” by J.J. Murray, a romance writer known for his multiracial story lines and characters.

“I finished the novel in three days,” said Ms. Stevenson, 38, the owner of a literary website where she blogs about romance novels and a youth contractor specialist for the Hampton Roads Workforce Council, which offers employment services. “I thought it was great and I like to meet the authors, so I sent him a friend request on Facebook.”

In October, Ms. Stevenson wrote a personal essay about completing a 5K run for the Ability Center of Virginia, a nonprofit group that provides services to people with disabilities.

“I was diagnosed with cerebral palsy when I was 2 and a half,” she said. “I post about my life and advocate for others. I tell people cerebral palsy is my super power.” The essay included a photo and video of Ms. Stevenson with her medal.

Mr. Murray, 57, was quietly following her accomplishments and posts. “I was going through a terrible divorce and was in a bad place,” he said. “I accept everyone who friends me because those people are potential readers. But when I watched Kim’s video and read about what she had been through and accomplished, I found her inspiring. I found myself thinking about her a lot.”

Though they still had never communicated directly, his thoughts about Ms. Stevenson turned into 235 pages of Mr. Murray’s next novel, “Kicked To The Curb,” which he completed in two months using Ms. Stevenson as his muse. 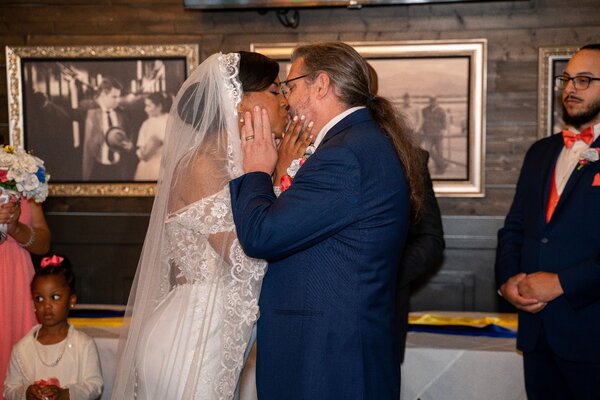 [Sign up for Love Letter and always get the latest in Modern Love, weddings, and relationships in the news by email.]

“My characters are powerful women,” said Mr. Murray, who is the author of 45 romance novels. “I’m drawn to women who have it all together. From her video I could see she did. I thought she was cute and fierce, and had a beautiful smile.”

Another year passed with no communication.

In January 2018, Mr. Murray sent Ms. Stevenson an email asking if she would read his forthcoming novel for factuality and authenticity.

She was flattered, charmed, but also “creeped out.”

“He had to do some digging to find my private email address,” said Ms. Stevenson, who agreed to read the manuscript. “I was surprised at how accurate he’d gotten me and the material.”

After Ms. Stevenson gave Mr. Murray her feedback, the two fell into a daily email and Facebook Messenger exchange.

Mr. Murray was trying to be professional. “I didn’t want her to think I was stalking her,” he said. “I didn’t write the book to meet her, but I wanted a friendship.”

That March, Ms. Stevenson spoke at the Cerebral Palsy Conference in Suffolk, Va. Mr. Murray drove out to hear her.

“I was fangirling the moment I saw him,” said Ms. Stevenson, who had brought a newly published copy of “Kicked To the Curb,” the novel she inspired, with her for him to sign. “He was attractive and established. I thought he wouldn’t be interested in me because I was younger.”

It was true: Mr. Murray is 18 years older. He had two sons from his first marriage; Ms. Stevenson had never been married and didn’t have children. He lived around 4.5 hours away from her in Roanoke, Va. Yet when they met in the parking lot of the conference, their connection was undeniable.

They spent the day together and had dinner. They couldn’t stop talking.

In July, Mr. Murray went on his annual trip to Canada with his father; Ms. Stevenson traveled to the Bahamas for a family reunion. When she arrived home, she found a Canadian care package filled with items Mr. Murray thought she’d like — a teddy bear, scarf, tea and cookies.

“My mother said, ‘You know he’s in love with you. No man goes to Canada and sends all these things back,’” Ms. Stevenson said.

They had their first official date a month later in August to celebrate Ms. Stevenson’s 36th birthday. They spent the weekend in Chesapeake, shopping, playing miniature golf, dining at a Mexican restaurant and sharing a Saturday afternoon kiss. A week later, Mr. Murray had a book signing in Raleigh, N.C. Ms. Stevenson accompanied him.

“That’s when we became a couple,” she said. “I realized this is the person I want to be with. I dated other guys who had issues with my cerebral palsy or didn’t want to date me because I was sick. John was everything. He was considerate and caring. I didn’t have to worry if he was going to wash his hands and be done. After that weekend I knew he would be there for me.”

Mr. Murray spoke similarly. “When she held my hand it felt like coming home — she made me feel calm,” he said. “I’m a nurturer and a caring person. She became the one I wanted to give attention, help and love to.”

The next year and a half was filled with Mr. Murray visiting monthly and with Ms. Stevenson forming a relationship with Mr. Murray’s sons, Jontae, 22, and Joshua, 26, and his father, John Stevens Murray, 82. There were trips to the hospital for Ms. Stevenson, family trips to Aylen Lake, in Ontario, Canada, and trips to jewelers to research wedding rings.

In December 2019, Ms. Stevenson became sick. Two months went by without a diagnosis, which Ms. Stevenson thinks could have been Covid-19.

“That was scary; we didn’t know what was wrong,” Mr. Murray said. “Kim had several strokes. That was scary, too. Her cerebral palsy has been a part of her life. Now it’s part of both of our lives. There are challenges, but they are worth it. Her spirit and mind and creativity outweigh everything else.”

In March 2020, Ms. Stevenson and her mother, Cecelia Carelock, left for Qatar to celebrate her mother’s birthday. The pandemic followed a few weeks later. Once they were able to return to the States, Ms. Stevenson quarantined with her parents who live in Springfield, Mass. Imposed lockdowns and travel restriction meant she was unable to return to her home until June.

A proposal came on Aug. 30, 2020, the anniversary of their first date, which they recreated, down to the table-side guacamole, served at their favorite Mexican restaurant, Plaza Azteca. When Ms. Stevenson returned from the restroom, a ring was on the table; Mr. Murray was crying. Ms. Stevenson did as well when she said yes.

“If this is as bad as life gets, we are going to have a great marriage because we have been through so much in this relationship,” he said.

The couple were married April 30, 2021, by Antonio Lundy, the pastor of Grace Tabernacle Church, at the Butcher’s Son restaurant in Virginia Beach. There were 45 guests in attendance; Mr. Murray’s sons served as best men.

“I’ve always written great loves for my characters. There wasn’t one in my own life. Now there is,” said the groom. “Kim went from character to friend to lover and now my wife. I’ve found a happiness I didn’t know I could feel.”

The bride echoed similar sentiments. “I never thought this was going to happen,” she said. “This is the first relationship I didn’t feel I had to hide a piece of myself. John has stepped up over and over again. He’s my real-life romance hero.”

The literary life “Everything at our wedding is based off John’s books,” the bride said. “Signed copies of the six books John has written that I’m in are on the tables. My bouquet is flowers made from the pages of ‘Have Ring Will Marry,’ which came out last summer. My engagement ring is on the cover.”

First dance The couple had their first dance to “All My Life” by K-Ci & JoJo.