Now lives: in a loft in downtown Los Angeles that he shares with his girlfriend.

Claim to fame: Mr. Moon is something of a mad scientist of hair coloring, dyeing the heads of Kanye West, Miley Cyrus and Madonna in expressionistic rainbow hues that look painterly. He was once called “the leader of the hair graffiti color cult,” by i-D magazine.

“I created my own freehand style where showcasing crazy colors in a high-end way makes it more like art,” Mr. Moon said. “Madonna once said to me, ‘Oh, Danny, I feel like a Basquiat right now, the way you’re coloring my hair.’”

Big break: In high school, he bleached his wrestling teammates’ hair as a way to stand out during tournaments. But he didn’t get serious about hair dyeing until the joined the Marines when he was 18.

“My girlfriend would send me pictures of her changing her hair week after week while I was on a base in Okinawa with nothing but male Marines,” he said. “There were four girls on the island, so, yes, I wanted to be a hairdresser.”

He left the military in 2001 and returned to Los Angeles, where he apprenticed at several high-end Beverly Hills salons. He eventually landed a chair at Andy LeCompte’s studio, where he worked from 2008 to 2016. “I was surrounded by the best of the best,” Mr. Moon said. “Andy introduced me to off-the-wall techniques I had never seen before.”

Latest project: Mr. Moon opened his own salon, Hair Los Angeles, in the downtown Arts District last year. The minimalist white space is decorated with his photography and art collection, along with his line of plastic aprons, cutting capes and glitter hair gel. “Because my work is often identified as art, people just thought my salon was a gallery or something,” he said.

Next thing: Being an outré Hollywood colorist means that he is subject to the whims of his high-profile clients, whether that means turning Katy Perry’s hair a shade of “muppet-referenced, sherbet-pink orange” or providing Zoe Kravitz a “blond moment that will withstand the history of time” for Allure magazine.

“Everybody is in a really good head space when I show up,” he said. “They’re like, ‘All right, dude, what you got?’” For those looking to parrot his kaleidoscopic touch at home, Mr. Moon plans to sell his own line of hair color products later this year.

Moon man: His Instagram followers know him by his nickname, Major Moon. He said the stage name of sorts is a play on “the color world, the Bowie world and the intergalactic world” of his creative practice and his military past. “It goes both ways,” he said. 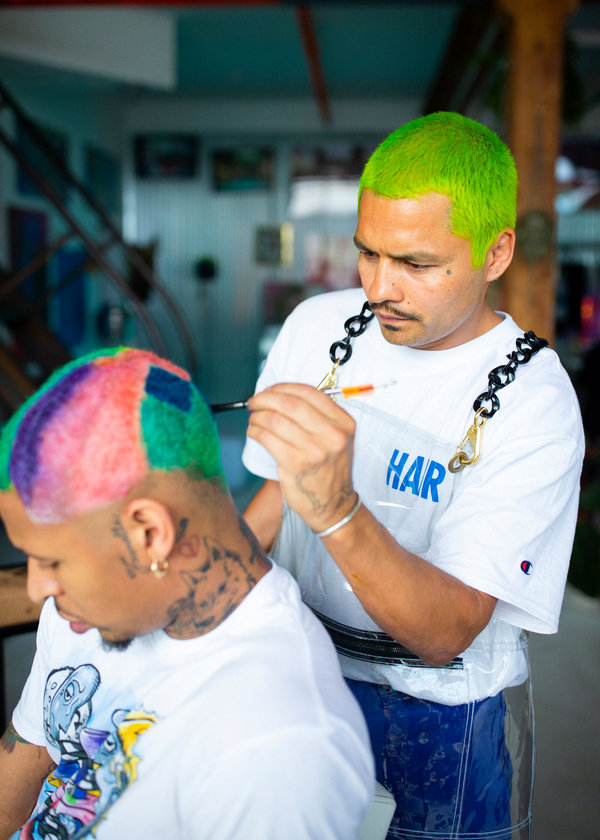