When Dr. Amit Patel and Martin Fulton met through Facebook almost eight years ago, neither of them had ever dated online. They didn’t live in the same state. Neither of them had ever said “I love you” to a boyfriend, and they had never introduced a significant other to their parents. Dr. Patel had not even come out as gay to his own family.

Last month, all of that was a distinct memory as the two grooms rode down Wall Street on white horses to exchange vows in a multicultural, dual-ceremony wedding that included 290 guests, a seven-foot-tall cake and several pairs of shoes.

“Despite us being gay, we’re marrying in a traditional Hindu wedding and having a Christian ceremony the way any other couple would,” said Dr. Patel, 40, an oncologist in Jersey City. “It will be a little different, but we want everyone to see that. We are surrounded by so much support and love, we want to celebrate that.” 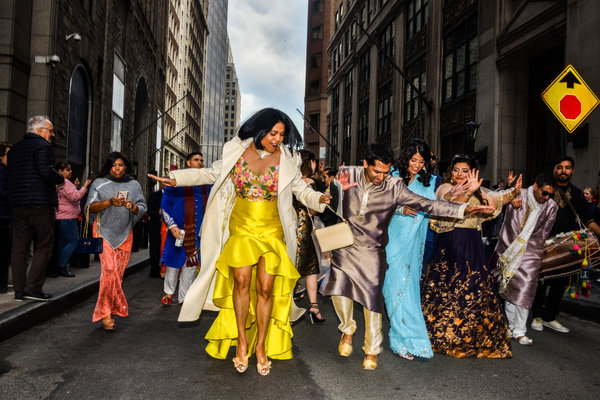 Their story started when Mr. Fulton, 31, saw the Facebook profile of Amit Patel through a mutual Facebook friend. “I requested him because I thought he was hot,” Mr. Fulton said. “But it took three or four months for me to actually send him a message.”

When Mr. Fulton finally did send a note, Dr. Patel responded. At the time, Mr. Fulton lived in Michigan, where he was studying biology at the University of Michigan. Dr. Patel lived in New York, working on his fellowship after medical school. Despite the distance, the pair continued to send messages to each other. Eventually, they began almost daily video chats on Skype.

“We decided a few months later we should probably meet to see if we actually do have chemistry together that’s not through a computer screen,” Mr. Fulton said of booking a flight to La Guardia Airport. “These were the days before it was socially acceptable or even practiced to meet online, so I was super nervous.”

Upon landing, Mr. Fulton headed to baggage claim where Dr. Patel waited. “I walked up and gave him a big hug from behind,” Dr. Patel recalled. “It was just all so easy — there was no hesitation and no doubt.” Both men remember this as a moment when they realized they were each a special man in their lives. “When he hugged me, it was a completely different experience than I’d ever felt before,” Mr. Fulton said.

The couple dancing before the ceremonies began. “We are surrounded by so much support and love, we want to celebrate that,” Dr. Patel said

For the next four and half years, the couple traveled between Michigan and New York City, then upstate New York and Jersey City, to spend time with each another while they each pursued their professional paths. Mr. Fulton had his sights set on business school (he recently graduated with an M.B.A. from Metropolitan College of New York), while Dr. Patel (who is now a partner in Hudson Hematology Oncology in Jersey City) completed his medical training in hematology and oncology. Mr. Fulton, who is originally from Plattsburgh, N.Y., moved closer to his parents for the remainder of his schooling. It was during this time when Dr. Patel forged his relationship with Mr. Fulton’s family.

Mr. Fulton had come out as gay to his parents and siblings two years before and had support and acceptance from his family. Dr. Patel, however, had not yet opened up about his sexuality to his traditional Hindu parents. “I just envisioned this having a negative outcome,” Dr. Patel said. “I was prepared that when I did, I may not speak to my family if their reaction was what I thought it would be.”

He said he cherished his time upstate with Mr. Fulton’s parents, Steven and Erena Fulton. They treated him like a son and often talked about the couple’s future. They asked about Indian culture and what different holidays meant. At the same time, though, Dr. Patel admits he felt guilty that Mr. Fulton didn’t have that kind of relationship with his Houston-based family.

Dr. Patel decided it was time to come out to his parents, Ashok and Geeta Patel, and to his brother and sister-in-law, who had long been trying to set him up with a woman. He was now ready to explain why he always declined the dates. He first called his brother, Dipul, who immediately responded, “I’m here for you.” Dr. Patel then flew home to tell his parents.

“I said, ‘I’m gay.’ This is the reason I’m not married yet,” Dr. Patel recalled, noting that he also told them about Mr. Fulton and his committed relationship of four years.

He then waited for his parents to respond. His father spoke first.

“This is you, and we accept it,” Dr. Patel remembers his father saying. “He said, ‘You can have money and wealth, but our family is our real worth. Family stays united, and as long as we’re united, I don’t care what the rest of the world thinks or what they say.’” Relief and shock set in. “Everything I feared for years and years about this scenario was not the outcome,” he said. “In my mind, I was going through so many emotions.”

Dr. Patel then shared that Mr. Fulton would arrive in Texas the next day to meet them. From there, the couple says, it felt easy. “I had always wanted to date someone who had a different culture than I did, because I was so interested,” said Mr. Fulton, who grew up going to a Methodist church on Sundays and traveling around the world with his parents. “I wanted to learn about the clothes, the music, the food and the traditions. They were just so welcoming and happy that I was so interested.”

A short time later, the pair introduced their parents during Diwali, the Hindu holiday known as the “festival of lights,” and then they began wedding planning. The couple knew they wanted two ceremonies, one presided by Dr. Patel’s uncle and Hindu pandit, Shri Sureshbhai M. Bhatt, and another, legally officiated by Mr. Fulton’s great-aunt and Methodist minister, the Rev. Catherine Aiken Cadieux. As if planning two events in a day were not complicated enough, the grooms realized that pretty much the entire Hindu ceremony focuses on the bride. They didn’t have a bride.

“It would not be one of us as the bride and the other identified as the groom,” Dr. Patel said of adapting the format with the help of their officiants and their event planner, Sonal Shah. “We have two grooms, and we changed it as we needed to.”

The result? The grooms donned custom sherwani jackets and safas from the Indian designer Tarun Tahiliani with Salvatore Ferragamo and Christian Louboutin shoes. Together, they rode white horses during a mutual baraat procession in New York from the Andaz Wall Street hotel to Cipriani Wall Street, where both ceremonies were held. Bollywood songs blasted on the back of a moving truck and all the wedding guests, everyone was the groom’s side, danced in the street with smoke bombs. Even passers-by snapped Instagram photos and waved their hands to join in the celebration.

Both grooms’ mothers stood waiting for her respective future son-in-law to arrive at the wedding location. Each blessed her future son-in-law with a series of prayers that ended with glitter streamers showering the grooms.

Then it was off for a costume change into Tom Ford tuxedos as guests snacked on Indian street food dishes. The grooms said “I do” in a traditional Christian ceremony, which included a biblical reading and Mr. Fulton’s family members sharing stories from his childhood. To honor Mr. Fulton’s deceased grandfather, Mr. Fulton’s parents sang his grandfather’s favorite hymn, “In the Garden.” The grooms shared personalized vows, which involved tears over their feelings of acceptance, and jokes about how Mr. Fulton has improved Dr. Patel’s fashion sense.

“We always said that whatever the wedding turns out to be, it needs to be quintessentially us,” Mr. Fulton said.

This extended to the reception, which included a towering cake by City Sweets and Confections, signature cocktails named after the couple’s top songs like Mariah Carey’s “Always Be My Baby,” and yet another shoe change into more Christian Louboutins.

Mr. Fulton touchingly spoke to Dr. Patel’s family in their native language, Gujarati. He may have mispronounced some words, but there was not a dry eye among the family.

The most tear-jerking moment came when Mrs. Fulton made a short but powerful statement as the grooms gazed on from their sweetheart table. “Thank you for being who you are,” she said. “We love you.”

Iconic Moment Before their baraat, the grooms walked hand-in-hand on the Brooklyn Bridge during a photo shoot. An American flag was flying in the backdrop.

Hilarity Ensued The night before the wedding, the pair hosted a traditional Indian sangeet at the Current, Pier 59. Along with group dances like the garba and mehndi by Raj Henna, Dr. Patel’s family re-enacted the grooms’ love story in a skit fit for a Bollywood movie.

Assorted Menu The chef Gaurav Anand served Indian-fusion dishes, including jalapeño popper samosas and paneer dumplings in a saffron reduction. Their cocktail mixologist, Hermant Pathak, did the same for drinks, using a masala spiced syrup in a twist on the Old Fashioned.