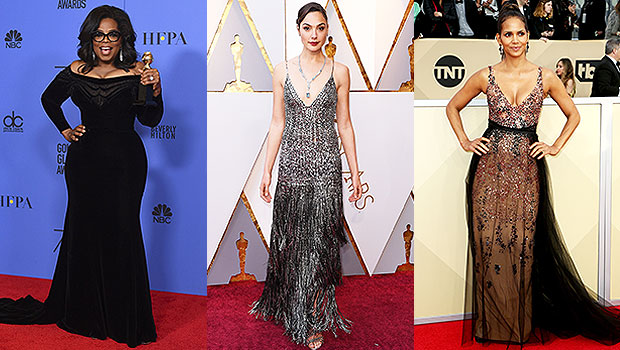 Awards season 2019 is finally upon us! Let’s look back on last year’s best looks as we get pumped for the Golden Globes on Jan. 6, along with everything else to come!

Beyond the show-and-tell of awards season being a who’s who of Hollywood at the moment, it’s a chance to see our absolute favorites show off their fashion sense on the red carpet! From the Academy Awards to the Grammys to the Golden Globes to the Screen Actors Guild Awards, there is plenty of fashion inspiration to take in from January to March every year! Last year, we loved looks like 33-year-old Gal Gadot’s sparkly gown at the Oscars on March 4, as well as 22-year-old Zendaya‘s more understated dress on the same night.

For the biggest film night of the year, Gal wore a 1920s-inspired glittery silver gown. The dress flowed with fringes at the bottom, and shined as Gal showed off her Wonder Woman body. The actress’ makeup was low-key and natural, and she wore her hair pulled back out of her face. Zendaya went for a totally different look than Gal’s: Elegant and simple, opposed to Gal’s vibrant, out-there ensemble. Zendaya’s one-shoulder Giambattista Valli Couture gown cinched at her waist, and its burgundy-brown color matched her dark eyeshadow. The Greatest Showman actress’ hair was arranged in a tight, slicked-back updo as diamond earrings dangled from her ears and she decorated her wrist with a diamond cuff. Zendaya has been killing the red carpet game for years now, so we’re sure she’ll wear something as equally stunning as her Oscars dress at any show she attends this year!

This year, it will be interesting to see not just the outfits themselves, but if the stars are being as politically vocal as they were at the 2018 award shows. Last year, most Golden Globes attendees wore black outfits to take a stand with the Time’s Up movement, so there wasn’t much of a variety when it came to the fashion on the carpet.

Of course, there were a lot more great looks from 2018 than just these, and we hand-selected our top outfits! From floral pantsuits to the all-black Golden Globes, the awards season red carpet was scattered with fashion hits we hope to see again from actors and actresses this year! Check out the gallery above with our favorite picks from 2018. One of our main takeaways for this year? We’re hoping the men step it up in the fashion department – a lot of plain black suits from them in 2018! We’ll be looking at them in 2019 for more fun and bolder looks!