“A Happy Excursion,” a double concerto that has its American premiere on Wednesday with the New York Philharmonic, takes its title from an ancient Taoist text. But it could just as easily describe the joyous performance of its soloists, Yo-Yo Ma and Wu Man.

They were at the top of their fields when they met in the 1990s: Mr. Ma, a superstar cellist; Ms. Wu, the world’s leading pipa player and a tireless ambassador for that lutelike Chinese instrument. Living in the same small Boston suburb, they became quick friends and colleagues; they’ve played together at the White House and with Mr. Ma’s Silkroad Ensemble.

[How Yo-Yo Ma wants Bach to save the world.]

Among their collaborators has been Zhao Lin, who wrote “A Happy Excursion” and, in the spirit of Silkroad, has already blended traditionally Eastern and Western instruments in another double concerto: “Duo” (2013), for cello and sheng, a Chinese reed instrument.

His latest concerto — a lush and cinematic work in three movements — pairs the cello and the pipa, which dates back more than 2,000 years. (Compare that with the relatively young cello, created around the 16th century.) In an interview this week, Mr. Ma and Ms. Wu discussed the piece’s meaning, and what their instruments sound like together. Here are edited excerpts from the conversation. 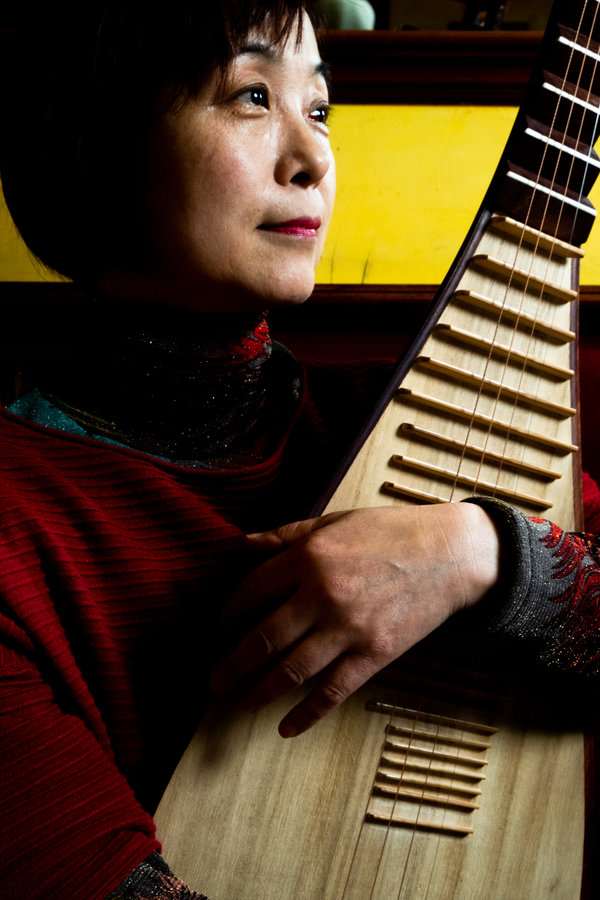 How would you describe the character of this concerto?

YO-YO MA Zhao Lin comes from a very literary and artistic family. He has a sense of old and new, and really knows poetic traditions. In the second movement, Wu Man plays this theme — it’s a melody that goes back to around the year 700 A.D. But he picked that and said, “I’m going to actually do something with this movement that shows something from that era,” the Tang dynasty.

MA Zhao Lin also comes from Xi’an, which around the Tang dynasty had easily a population of over a million people. They had mosques, Buddhist temples and Christian churches. It was really open; they called it one of the golden ages. It was such a rich and open and multicultural society. So there is a kind of beauty to that movement, going back to this golden period.

The title, “A Happy Excursion,” is a little misleading.

What do you mean?

WU In Chinese, everyone understands it. A better translation is that you’re more a kind of scholar. It’s the ideal life. With imagination, you can go everywhere you want to go.

MA You can go everywhere. And he takes us through time travel. The first movement is all about the beginning of things, different forces that come together and become China. We have that second movement, the golden period. And then we have the last movement, the present. It’s in seven — it’s a very contemporary rhythmic sound — but it has elements of the golden period in it. So the question is, how are we, in our present moment, going to evolve ourselves?

[Plan ahead with The New York Times’s Culture Calendar.]

The timbres of your two instruments are so different. Does that pose a challenge?

WU I still remember the first time we played together. In the first rehearsal, I felt really bad and awkward because I didn’t know how I could play with the cello. They do sound different. We changed how we produce sound on the instrument. [Speaking to Mr. Ma] You changed your bowing. But over 20 years we kind of got used to it, so the combination of pipa and cello is not strange to us anymore.

The pipa has a history as a court and solo instrument. But they can be produced for a bigger hall now, with steel strings instead of silk. We also use amplification.

MA Can I say something about Wu Man? Whether it’s science, journalism or anything, you want people to take the profession further, setting the tone for what’s desirable and what can advance.

Today, the pipa and Wu Man are kind of synonymous, and the instrument is normal. But it’s because in 29 years she’s gone from something that’s exotic to absolutely accepted. She plays in cafes, stadiums, concert halls, museums. She’s commissioned everybody: Lou Harrison, Philip Glass, Zhao Lin. The repertory was very small, but she has expanded it by several hundred thousand percent.

What does it mean that this piece — and this instrument — is represented onstage with the New York Philharmonic?

MA What I love about New York is that it’s a world city. Depending on whom you ask, either that’s a terrible thing or it’s the most normal thing. You look at the New York Phil, and look at the number of Asians — what we need, actually, is much more African-American and Latin-American representation, because those are our two largest minorities. I don’t think either Wu Man or I feel odd being what we are. It feels normal to us. I’m not proud; I’m just glad.