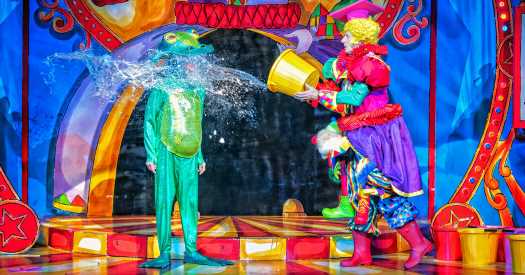 LONDON — Every year, for the past 42 years, Berwick Kaler has spent all of December and half of January onstage, wearing an elaborately hideous, multicolored hooped dress, workman’s boots and a bright orange wig.

He is Britain’s longest serving pantomime dame, which makes him, in a way, a Christmas institution. Pantomimes — the merry, family-friendly musical comedy shows which take top billing at theaters throughout December here — traditionally feature an actor in drag. For the people of York, in the north of England, where Kaler has played the dame in productions since 1977, he is as much a part of the holidays as turkey, gifts and family disputes.

At the beginning of last year, Kaler retired from playing the dame, but he had planned to return to the stage at the age of 74 in “Dick Turpin Rides Again,” at York’s Grand Opera House this month.

“It’s one of the most exhilarating, rewarding and physically challenging experiences any actor can go through,” he said of playing a dame in a telephone interview. 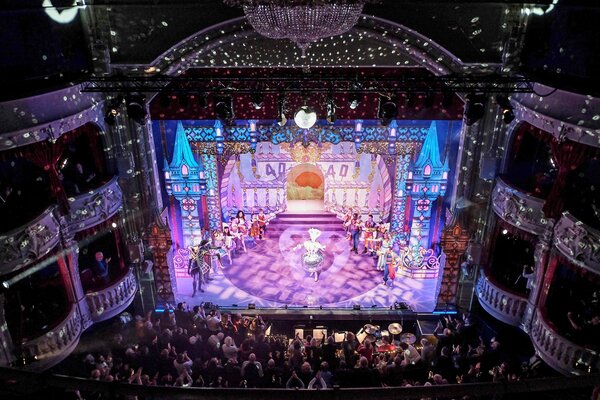 In September, however, his plans for a reprise were shelved because of the coronavirus pandemic. “Dick Turpin Rides Again” is one of more than 180 British pantomimes that have been canceled or postponed until next December, a development which has plunged the country’s theater industry, already beleaguered by months of national shutdowns, into dire financial straits.

The pantomime remains a peculiarly British tradition. It is nominally a children’s Christmas show based on a fairy tale — such as “Sleeping Beauty,” “Cinderella” or “Jack and the Beanstalk” — to which music-hall elements are added, making it a show for all the family. These include the dame (who usually has a penchant for sexual innuendo), song-and-dance routines with topical lyrics, slapstick, in-jokes, call-and-response (“Oh no it isn’t!” “Oh yes it is!”) and familiar celebrity guest stars, including ex-soap opera actors, former boy band members and children’s TV presenters.

Pantomimes represent many British children’s first experience of live performance, and many adults’s only theater trip in a year. In pre-Covid times, when multi-generational outings were not considered a health risk, three generations would often attend shows together. Featuring large casts, dancers, musicians, elaborate costumes and special effects, “pantos,” as they are known, usually provide work for thousands of people each year.

As such, they are crucial to the British theatrical ecosystem. In the 2018-19 season, according to figures compiled by the industry advocacy group U.K. Theatre, there were 2.9 million tickets to pantomimes sold, with takings of 63 million pounds ($83 million) at the box office. For many theaters, the festive show provides the financial means to stage the rest of the year’s program, typically bringing in around 30 percent of their annual box office in just four weeks.

Most theaters in Britain have been shut since March, when the country went into its first coronavirus lockdown. The British theater industry is projected to lose £3 billion ($3.9 billion), or 61 percent of its expected revenue, in 2020, according to a report published in June by Oxford Economics, a forecasting group. In the same month, as many as 200,000 theater jobs were thought to be at risk, if the government didn’t intervene.

When, in July 2020, the British government announced a £1.57 billion rescue package for arts organizations at risk of closure because of the pandemic, pantomimes were given special mention by the culture secretary Oliver Dowden. He even named the project to bring back live performance “Operation Sleeping Beauty.”

But planning for the pantomime season usually begins more than a year before the season begins. In August, with no clarity on whether live events would be permitted around Christmas, the production company Qdos whittled its planned 35 panto productions down to nine shows at 10 venues, according to Michael Harrison, a joint owner of the company.

Pantomime is built to survive even the harshest of conditions, said Harrison in a telephone interview. “It’s the most adaptable of art forms,” he continued. “It’s all about what you create for the here and now. So when somebody says, ‘Everybody onstage has to be two meters apart at all times,’ that’s fine.”

This year, the Qdos shows that are still expected to take place are socially distanced onstage and backstage, with fewer dancers in the chorus line and more understudies in case of cast illness. All props, from fairy wands to magic lamps, are sanitized before every touch and each show has a “Covid monitor” to ensure adherence to the rules.

In the auditorium, the masked audience members are seated in “bubbles” with family or household members and will be discouraged from shouting out as is traditional to limit any potential spread of the coronavirus. The shows are 75 minutes without an interval, rather than the usual two-and-a-half hours, to avoid audience mingling, and the theaters will have to do without their usual profits from selling drinks and candy.

After a monthlong national lockdown, the government introduced a tier system of restrictions; in third tier areas, where the coronavirus risk is considered to be very high, theaters were ordered to remain closed until at least Wednesday, with tier reviews scheduled every two weeks. On Monday, the government announced that all London theaters would close on Wednesday, when the city enters the highest tier of restrictions. At the time of writing, all 10 of Qdos’s planned openings had been further postponed to later in December, with three scheduled to open in early 2021.

“Christmas is about 28 percent of our annual box office,” said Dan Bates, the chief executive of Sheffield Theatres, a group of three venues in the north of England that fell under the fiercest tier restrictions at the beginning of the month. For around 80 percent of their Christmas audience, a pantomime is the only time they’ll visit the theater all year, he added.

The largest of the three theaters, the Lyceum, has been closed since the first national shutdown in March. “Sleeping Beauty,” the pantomime that should have opened there this month, was canceled in July. Instead, the plan was to stage a trimmed, 70-minute version of a pantomime in the smaller Crucible Theatre.

“We’ve got to plan to be ready” for whatever happens with the local pandemic restrictions, Bates said. In the event the theater remains closed through the holiday season, the show will be filmed and put online.

“It’s like waiting for an exam result, seeing which tier you’re going to be in,” Bates said. Each time the theaters “announce a plan, it’s fairly guaranteed that it’s going to change,” he added.

Theater makers have attempted to innovate their way out of the crisis with live-streamed, open-air and even drive-in pantomimes. The BBC will screen its own “virtual” pantomime — “Cinderella” — on Christmas Eve, starring Olivia Colman, Helena Bonham Carter and Anya Taylor-Joy.

Peter Duncan, 66, has performed in pantomimes since childhood. Over the summer, he filmed a “Jack and the Beanstalk” panto in his back garden, with a giant sycamore tree acting as the beanstalk. He ended up employing some 35 theater creatives, and in September, the film was bought by two U.K. cinema chains, to be shown at 55 screens this month.

“It was a way of being proactive,” Duncan said. “Panto reaches parts of the public that no other theater does.”

Among the genre’s fans is Joshua Williams, 23, a teaching assistant from Colwyn Bay in north Wales, who spends around £500 ($650) a year traveling around the country to watch his favorite celebrities play Cinderella, Dick Whittington and Mother Goose.

At a panto, “you just forget where you are for a few hours and you turn back into a child,” he said in a telephone interview.

Last year, in his two-week Christmas vacation from school, he watched 11 pantomimes, visiting London, Birmingham and nearby Llandudno. This year he only has three booked.

Some theater makers have had to diversify their income sources to survive this most unusual year. Lily Arnold, 35, has won awards for her pantomime set and costume designs. Normally, she would spend around “half the year” working on a panto, she said. In 2020, she hasn’t worked in a theater since March.

“I’ve still got nothing fixed in the diary for next year. It’s all very tentative,” Arnold said. Instead of making dresses for dames, she has been busy making and selling mugs on Etsy. She keenly misses the collaborative push-and-pull that comes with staging a panto.

“When you’re designing a panto, you get stressed in the way that you would with a normal show,” she said, the difference is the “incredible buzz when you see 800 children who are absolutely transfixed. It’s pure delight.”

The long-serving dame Berwick Kaler had already written the script for “Dick Turpin Rides Again” when the show was canceled in September. His Christmas will be rather different this year. “It will be very quiet,” he said. “I might start writing next year’s pantomime.”