In May, a sleek white fiberglass sculpture in the shape of a Predator drone will be installed atop a 25-foot-tall pole and rotate in the wind on the High Line at 30th Street in New York. With a wingspan of 48 feet — almost the actual size of the remote-controlled military aircraft but stripped of its cameras, weapons and landing gear — the kinetic artwork could appear as a modernist bird hovering in the sky, reminiscent of the biomorphic sculptures of Constantin Brancusi or Barbara Hepworth.

The work is by the American artist Sam Durant, 59, who has dedicated his career to research-intensive projects about war, monuments, mass incarceration and other difficult legacies of U.S. history. Durant’s new commission for the High Line is his first large-scale work in the public sphere since the 2017 controversy in Minneapolis over his sculpture “Scaffold,” which enveloped the artist in a storm of cultural debate over whether white artists should depict painful racial narratives that weren’t necessarily their own stories to tell.

“Scaffold” was an architectural composite of gallows used in six hangings sanctioned by the U.S. government, including the 1862 execution of 38 Dakota men in Mankato, Minn. It was made in 2012 for Documenta 13 in Germany, where it was shown without incident as a critique on capital punishment in America. The piece was later acquired by the Walker Art Center and installed in its Minneapolis Sculpture Garden in 2017 without any outreach to the Dakota people. Members of Minnesota’s Native American communities protested what they recognized as a representation of the Mankato gallows and a symbol of their genocide. Olga Viso, then the Walker’s director, and Durant quickly agreed to dismantle “Scaffold” and the artist offered the intellectual property rights to the Dakota people in a mediation guided by the tribe’s elders. 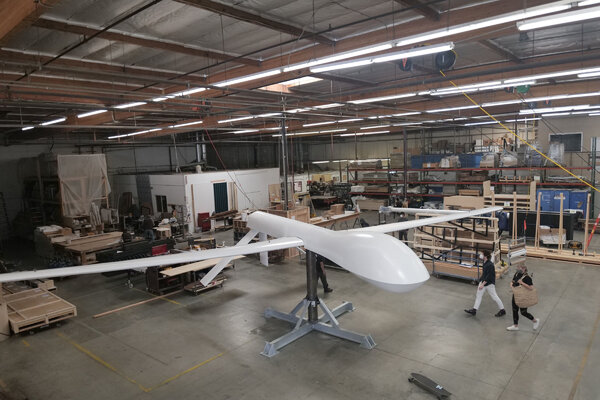 Durant originally conceived “Untitled (drone)” in 2016, when it was one of 12 shortlisted along with Simone Leigh’s proposal for “Brick House” for a new monumental public art commission called the High Line Plinth to rotate every year and a half. Cecilia Alemani, director and chief curator of High Line Art, tapped both artists in early 2018 for the first two consecutive commissions. (“Brick House” went on view in 2019.)

Durant’s pale aerodynamic piece will move and vary in visibility, something the artist plays with intentionally. In certain weather conditions and from different vantage points it may almost become invisible against the sky. “For Sam, the goal is to make visible in America the drone warfare that this country carries out against countries very far away,” Alemani said of the targeted killings that first proliferated during the Obama administration.

The independent curator Pedro Alonzo, who has organized three previous projects with Durant, including “Iconoclasm,” in 2019, at the Library Street Collective in Detroit, is interested in how his drone sculpture will use weather as a metaphor for the fluctuating political climate. “It’s a weather vane so it shows us which way the wind is blowing,” Alonzo said, adding that it “reminds us that things can change very quickly.”

In a phone interview from his studio in Berlin, where he moved from Los Angeles with his family in 2018, Durant spoke about the new project and reflected on his experiences with “Scaffold.” Here are edited excerpts from the conversation.

What kind of impact have the events around “Scaffold” had on you?

“Scaffold” was definitely a life-changing experience and certainly provoked a real reflective period for me. I have changed some of the ways I do my work but I am still committed to the same sorts of subject matter as before, things that are important to society.

Has it changed how you approach public space?

When working with subject matter around racial injustice, one has to collaborate with those who have experienced the injustice, especially in public art. Something that I learned from “Scaffold” is just how powerful symbols can be in evoking strong emotion. They can really be psychologically harmful to people. That’s something I didn’t fully understand. You can get the same idea across by abstracting the representation in the work.

Is that why you have taken particular care now to strip the drone of its apparatus and specific details?

Exactly, there’s been an emphasis on abstracting the plane itself to really streamline it. And the base, rather than having a solid monumental plinth, we’ve made a two-tiered stepped base so that people can sit on it and have a more interactive experience. This is a space for conversation. I was very concerned with using unmanned aircraft to essentially assassinate people. It was seen as popular in the United States because U.S. soldiers didn’t have to go to the battlefield. But what about the casualties in the countries that were attacked by our drones? The idea was to bring this conversation home to America.

Looking back at what happened around “Scaffold,” what was the most difficult or painful part for you?

It was really hard to be so misunderstood and attacked and characterized as a racist and a terrible person taking advantage of others’ suffering. Having my work seen by the Dakota community, whose struggle with historical injustice it was meant to support, as an attack on them was deeply painful. I was caught between the Walker Art Center and a community of people that were very aggrieved over many, many things. Because of the way the institution put “Scaffold” up without letting anyone know, without getting input, without really understanding what this thing might mean to the Dakota community, I was put into a profoundly difficult situation.

Would you do anything differently if you could?

In the moment, given the exact same circumstances, I would do what I did again. What was most important to me wasn’t my own artwork or even an abstract defense of freedom of expression but that this was a time and place to do something meaningful for people who have been suffering an ongoing genocide. I realized that what I should do is just give the work to the Dakota. They wanted to perform a ritual healing process and that was, in my eyes, the most appropriate way to continue with the work.

What ultimately became of “Scaffold?” Was it buried?

I believe so. I haven’t gotten a communication from the Dakota stating what they did with it.

When was the last time you were in contact with the various parties in Minneapolis?

I was in contact with Olga Viso before she stepped down at the end of 2017 and I met with Mary Ceruti just after she took over as director. I’ve had no contact with anyone since. The museum continues to refer to the matter as the “Sam Durant scandal/controversy” in their press releases and I have the impression that the Walker would like to blame the whole affair on me. To be fair, the art press also does this.

You wrote in a statement last fall that the museum could still reconvene the three main stakeholders in “Scaffold” — the Walker Art Center, the Dakota Oyate that controls the copyright and yourself.

They could do that privately or publicly to try and work through what happened. There’s an issue for museums and institutions to try to come up with best practices for public art. There’re also issues around value and aspects of intellectual property rights. I welcome any good-faith initiatives they might want to let me know about or include me in.

You also wrote that you hope your experience with “Scaffold” does not dissuade other white artists from taking up difficult issues of racial justice.

It is essential that white people be involved in dismantling white supremacy. So many civil rights leaders have called on white people to join the struggle for racial equality. One of the really important things that’s happening now is the opening up of opportunities for artists of color and curators of color. After generations of white supremacy throughout the art world, we’re finally starting to acknowledge and change that. There are a lot of white artists out there doing work about racial justice and social justice. Those of us who have been doing it a long time, we continue to do our work and learn as we go.