I spent many late nights in the 1980s holed up in hotel rooms on the road, often in the company of a much older woman wearing a negligee and a Tony medallion.

Her name was Mathilde Pincus and she’d been given that award in 1976 for her services to theater as a copyist and music supervisor; I was one of her lowermost drudges. Sometimes her sister, Harriet, and their ancient mother, Ida, came along to help out.

To others in the hotel, we must have looked like the first scene of “Macbeth” or victims of some weird industrial accident — splotched with ink, filigreed with eraser dust, haloed by ammonia and plastered with Band-Aids.

Before computers, copyists wrote out every note of a score on onionskin paper, then rewrote it all when it changed or cut and spliced the rewrites into two or three dozen orchestra parts. (Hence the Band-Aids.) Lowering a song’s key by one tone was an all-night proposition; new songs, which came and went constantly, were even worse. If by Philadelphia we looked like survivors, that’s because we were.

And that was the point. The traditional tryout system that had ushered so many great musicals to Broadway by starting them out of town did not work by coddling a show’s copyists, let alone its cast and creators. In a series of short runs along the Eastern Seaboard immediately before a New York premiere, it tested them all — and the material — often past the point of endurance, until the best possible product emerged.

And yet by the time I was spending midnights with Mathilde, road tryouts had drastically changed and would soon disappear. Thanks to huge increases in the costs of touring and the growing uncertainty of booking theaters in New York, those short, serial stays nearby were mostly replaced by single, longer stays somewhere else.

That pattern has since become the norm; indeed, not one of this spring’s musicals has followed the older path. Some have come via Off Broadway, London or even, in the case of “Be More Chill,” the internet. One — “Kiss Me, Kate” — is opening cold, with no tryouts anywhere. 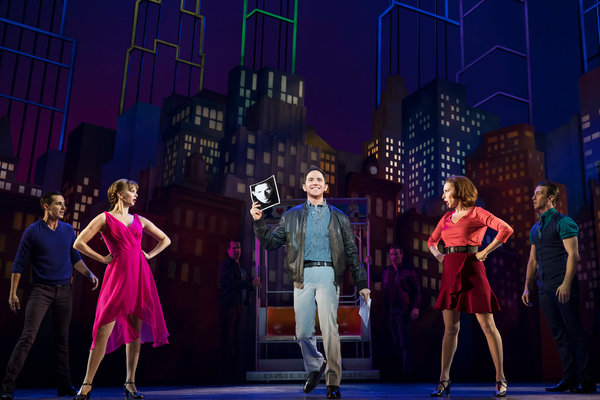 But the season’s biggest commercial shows each found advantages, beyond generating local buzz, in planning just one longish out-of-town sit-down: “Tootsie” in Chicago, “Beetlejuice,” in Washington and “Ain’t Too Proud — The Life and Times of the Temptations,” in Berkeley, Calif. Not that the plan always panned out as hoped.

“Tootsie,” based on Larry Gelbart’s screenplay for the 1982 movie, had the smoothest sail. After about three years in which the creative team — David Yazbek (score), Robert Horn (book) and Scott Ellis (director) — reshaped the material for the stage, a reading in early 2017 convinced the lead producer, Scott Sanders, to book a tryout in Chicago last fall.

Why Chicago? Aside from the well-equipped, Broadway-size theaters available there, Mr. Sanders said, “what you value most are smart, sophisticated audiences — and critics.” (Unlike many cities, Chicago still has a full-time theater reviewer, Chris Jones, at its largest newspaper, The Tribune.) “The feedback you get from both becomes the really important learning.”

Easy to say when your reviews include the word “boffo” in the headline. The producers of “Beetlejuice,” based on the 1988 Warner Bros. movie, faced a different outcome.

Operating on much the same schedule as “Tootsie,” the show, with songs by Eddie Perfect, a book by Scott Brown and Anthony King, and direction by Alex Timbers, received some prominent, scathing notices when its tryout opened at the National Theater in Washington last fall.

Reacting to criticism is part of what the old system was good for, at least when it worked. Coming to Broadway with no intermediary stops can mean not having enough time to figure out fixes and test them live.

But Mark Kaufman, the show’s lead producer, pointed out that the opposite can also be a problem. “Sometimes people work too long on shows,” he said. “Once you learn these things, you want to put them right in. We’ve done a lot of work since Washington: new songs, strengthening the relationships. In that sense, the timing actually worked for us. It let us capture the magic.”

Mr. Kaufman is right: A musical can be like dough; work it too much and it tastes like cardboard.

Take the infamous case of “The Conquering Hero.” Over six weeks in late 1960, that show, based on a Preston Sturges film, fell apart like a jalopy as it rattled from New Haven to Washington to Philadelphia. Bob Fosse, the director and choreographer, was squeezed out; the leading lady was fired; lawsuits were threatened. Fosse was eventually awarded six cents in arbitration.

None of it helped: “The Conquering Hero” opened in New York in January, 1961, got terrible reviews and closed five days later. But the experience did give Mr. Gelbart, who wrote the show’s book, the opportunity to make a classic quip: “If Hitler’s still alive, I hope he’s out of town with a musical.”

Some sources report that he actually said Eichmann, but either way he encapsulated for all time the nightmare of the road tryout, with its endless hours, bad accommodations, blistering fights and creative whiplash. No wonder producers no longer attempt it.

At least not on purpose. But when “Ain’t Too Proud,” with a book by Dominique Morisseau and direction by Des McAnuff, finished its two-month tryout at the Berkeley Rep in November, 2017, the plan to move directly to Broadway collapsed for a simple reason: There were no suitable theaters available.

The show’s lead producers, Ira Pittelman and Tom Hulce, faced a difficult choice. “We could hope that a theater would open up after all,” Mr. Pittelman said, “or put everything on hold for a year.”

Neither option was attractive. For one thing, there was no guarantee that the right theater would become available, even then; with so many blockbusters on Broadway, new shows face daunting odds. In any case, Mr. Hulce said, they felt the need to maintain the momentum and chemistry of their company.

The solution was something of a surprise: a series of invitations from regional theaters to book the show as part of their seasons. A monthlong run at the Kennedy Center starting last June was followed by one in Los Angeles and then Toronto. All broke attendance records, which was a good thing because keeping the cast and musicians together for five extra months cost the production a fortune.

“Aesthetically it was a wonderful experience,” Mr. Pittelman said. “Crazy but wonderful. But it was not a business model you would recommend.”

Crazy but wonderful is what I remember of the old system, which “Ain’t Too Proud” inadvertently replicated. Moments of genius sometimes arose from the pressure of making each day’s performance, and each city’s run, better than the last, week after week.

Whether the new system has helped this season’s big musicals become their best selves will soon be clear. “Ain’t Too Proud” arrives at the Imperial Theater on Feb. 28, “Beetlejuice” at the Winter Garden on March 28 and “Tootsie” at the Marquis on March 29.

I’ll be there, with ink if not Band-Aids.