You better believe that Serena Joy just underlined the true theme of The Handmaid’s Tale’s explosive fifth season… and she did it with a smile, too.

Everyone in the UK has waited such a long time for season five of The Handmaid’s Tale – but the explosive new instalment of the dystopian drama has already proven itself to be well worth the wait.

This week’s episode, which aired on Sunday 30 October on Channel 4, saw our eponymous Handmaid, June (Elisabeth Moss), finally try to make the most of having escaped from the nightmarish clutches of Gilead. Because, after a less-than-enjoyable game of Scrabble with Rita (Amanda Brugel) and Moira (Samira Wiley) – not to mention a pep talk from her husband, Luke (O-T Fagbenle), June decided to let her hair down a bit. To push aside her quest for vengeance. To stop plotting new and creative ways to ruin her life. And to, you know, focus on what it means to be free.

Naturally, this newfound attitude to life doesn’t last for long. This time, though, it’s not June’s fault – not exactly, anyway. Sure, posting the severed finger of the late Commander Fred Waterford (Joseph Fiennes) to his pregnant wife, Serena Joy (Yvonne Strahovski), wasn’t exactly the best idea, but June can be forgiven her need to hurt the woman who kept her imprisoned as a sex slave and surrogate for years on end.

Basically, June wanted to have her Lady Olenna Tyrell moment: she wanted Serena to know it was her who orchestrated Fred’s death – and, now that’s out of the way, she wants to go on a date with Luke to see the ballet. Obviously.

A brief moment of happiness for Luke (O-T Fagbenle) and June (Elisabeth Moss).

Unfortunately for June, however, Serena isn’t the kind of woman to quietly accept that sort of bombshell and move on with her life. Far from it, in fact…

Rather than accept the “tasteful” (read: hilariously tiny) church that has been booked for her husband’s funeral, Serena Joy is keen that the Commanders of Gilead organise a huge state affair – and broadcast it live on TV screens all around the world. It’ll help raise the stature and the legitimacy of Gilead, she says.

The making of The Handmaid’s Tale

Naturally, they laugh her out of the room (she is, after all, a woman – and a pregnant one at that), but Commander Lawrence (Bradley Whitford) manages to bring the others round to the idea. How did he manage to persuade them when Serena couldn’t?

The funeral is a pitch-perfect affair; impossibly lavish, resplendent, and a firm reminder to nations around the world that Gilead has done what so many others have failed and managed to solve its fertility crisis – albeit through cruel and nefarious means. Children are gathered in front of the cameras, Handmaids presented in mourning attire, and Serena presented as a “barren woman made fruitful by His grace”.

Much like a perfectly choreographed ballet, though, there are many more layers to this event. Firstly, Serena is hoping to protect herself and her unborn child via the means of celebrity, making herself so famous that she becomes untouchable. And secondly, she wants to issue a stark message to her nemesis, June: a reminder that, despite everything that has happened, she is the one who holds all the cards in their relationship.

How? By having June and Luke’s imprisoned – and likely indoctrinated – daughter, Hannah (Jordana Blake), appear alongside her in the televised funeral. Appear alongside her, present her with a bouquet of flowers, and even allow Serena to kiss her on the forehead.

Once her interaction with Hannah is complete, Serena then looks directly into the camera and gives a barely perceptible smile to viewers – and to an aghast June, who is watching the scene unfold from miles away, her easy-breezy date night plans long forgotten.

“We talked a lot about that final – and we have a number of takes – but that final image through that black veil, of Serena Joy and just how much that mouth curves into the slightest smile,” executive producer Warren Littlefield explains to TVLine.

The Handmaid’s Tale recap: the real reason we respond so strongly to Aunt Lydia

“Yes, she wants to honour Fred, but this is Serena Joy’s stepping in and getting on the throne, and she’s masterful,” Littlefield adds. 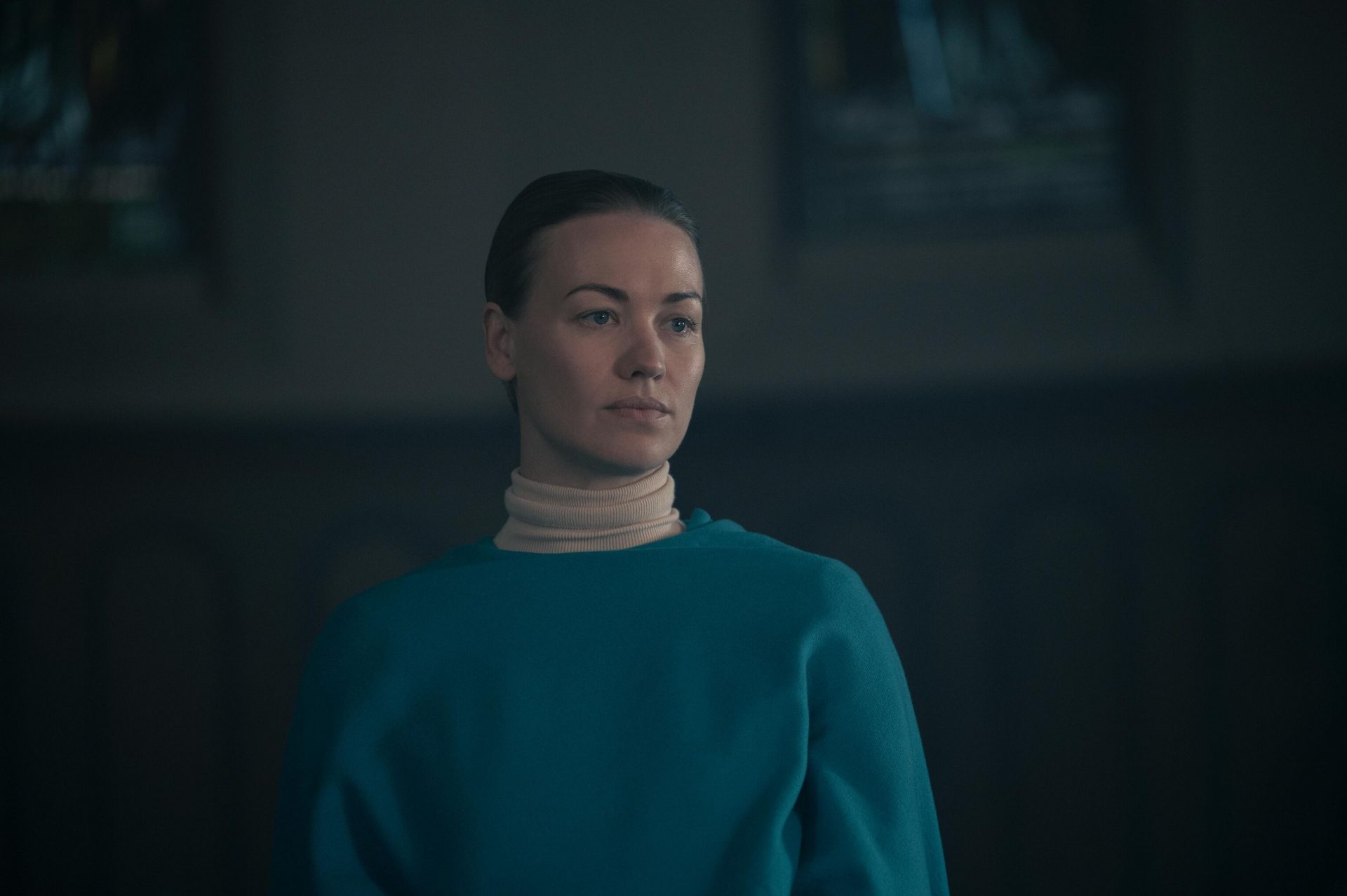 Serena Joy proves once again that she is a terrifying foe.

Essentially, Serena has reminded June that, while Moss’s character may have thought she’d regained some semblance of power after murdering Fred, she still has her claws on Hannah. And, just like that, June’s thirst for blood and destruction is reignited.

A new theme for season 5

“Season five is all about that gamesmanship,” says Littlefield, insisting that the focus for the upcoming episodes will largely be upon the twisted relationship between June and Serena.

“These are two people who hate each other, want at times to kill each other, have the ability to, and then there’s also this fascinating respect that comes into play.”

What will June (and Luke, obviously; let’s not forget Luke) do after seeing Hannah on the big screen? We will have to wait and see, but it seems safe to suggest that Serena’s smile just changed the game for everyone involved in a big way. And, in a way, she may have well and truly scuppered herself, too.

The Handmaid’s Tale season 5: the trailer is finally here – and it’s even more intense than we’d hoped

Why? Well, because June was alone in her desire for vengeance before. Now, though, it seems as if Luke will be just as furious, just as likely to lash out, and just as likely to do something very, very stupid. Which, considering everything we’ve just learned about the dangers of martyrdom via Fred’s demise, is a Very Pressing Concern.

And on that note…

After a traumatic visit with her new commander, Janine’s former Commander Warren Putnam (Stephen Kunken), Esther (Mckenna Grace) decides to make a martyr of herself. How? By biting down on a poisoned chocolate… and feeding one to an unknowing Janine (Madeline Brewer), too.

In the blink of an (under his) eye, both women are coughing blood all over the floor of the Red Centre, as a horrified Aunt Lydia (Ann Dowd) rushes in and desperately attempts to save them both.

Could this harrowing moment be the one which finally forces Lydia to acknowledge her own contributing role in Gilead’s abuse of the Handmaids? Well, Brewer certainly hopes so.

“Ultimately, Lydia cares about these girls,” she tells The Hollywood Reporter. “As much as we want to think that she doesn’t, if you spend even 30 seconds talking to Ann [Dowd] about Aunt Lydia, she’ll say, ‘She loves those girls, she loves girls.’ And she does. I think you see it in every scene that Ann and I have. There’s so much love there.”

She adds: “My hope is that Aunt Lydia is realising that if you love these girls, you have to advocate for them in a very real way, not just in the ‘It’s God’s will’ kind of way.”

Considering the sway that Lydia holds over the likes of Commander Waterford, a shift in her allegiance would be no small thing for the Handmaids in her care, not to mention the people behind the Mayday Rebellion.

Until next week, then!

The Handmaid’s Tale continues on Channel 4 this Sunday 6 November at 9pm.

Merri-bek wants cats indoors, but only if owners are feline like it
ENTERTAINMENT