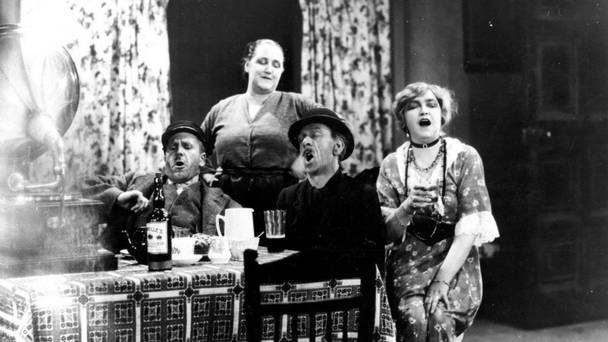 In 1929, one of Ireland’s best playwrights and arguably England’s greatest film director embarked on a most unlikely collaboration. Alfred Hitchcock was much taken with Seán O’Casey’s Civil War epic Juno and the Paycock when he saw it on the London stage in 1926, and thought it might make a great film.

Bizarrely, he planned a silent version, but by the time he got around to shoot it in 1929, talking pictures had arrived in Britain. So had O’Casey, and Hitch wooed the Dublin playwright during the film’s preparation. They got on after a fashion, but neither would be very happy with the finished product.

Hitchcock’s Juno tends to be overlooked these days, was almost lost and is rarely screened. But it’s a remarkable artefact in many ways, and a new documentary which will premiere during the Virgin Media Dublin International Film Festival explores the making of this flawed but fascinating film. Directed by Brian O’Flaherty with the help of the East Wall History Group, When Hitchcock Met O’Casey illustrates just how improbable the great men’s partnership was.

Their backgrounds, though, were not so different. Both were born into the so-called ‘shabby genteel’ lower-middle class, O’Casey in Dublin’s Dorset Street in 1880, Hitchcock in the dreary East London suburb of Leytonstone, two decades later. But while Hitch’s childhood was a little lonely but otherwise relatively comfortable, O’Casey experienced real hardship in north Dublin’s tenements after the family slid down the social scale following his father’s early death. Flann O’Brien, always one to spread the love, viciously satirised Seán O’Casey in At Swim-Two-Birds as ‘Jem Casey’, the ‘poet of the pick’, but O’Casey’s working-class credentials were real enough. His Protestant family ended up around Sheriff Street, and Seán’s schooling was blighted by an eye infection. He taught himself to read and write at 13, and left school a year later to take up a series of manual jobs.

O’Casey was radicalised during the Gaelic revival, first becoming a nationalist before the events of 1916 converted him to international socialism. In When Hitchcock Met O’Casey, the author Peter Sheridan tells a nice story about how the playwright was inspired to create his greatest works. “O’Casey and Gabriel Fallon [the future drama critic] had been to a play in the Abbey about the tenements,” Sheridan explains, “it was called Slum.

“O’Casey thought it was bourgeois nonsense, hated it, and as Fallon told the story, they walked home afterwards and under the Five Lamps, O’Casey made this declaration that he was going to write a real play about the real slum-dwellers of this city.”

In fact he wrote three, Shadow of a Gunman, Juno and the Paycock and The Plough and the Stars, which cleverly undercut the supposed heroics of 1916 and the wars that followed by demonstrating how little difference they made to the plight of Dublin’s underclass.

He was deeply ambivalent about 1916, and very uneasy about the socially conservative direction the new state took after independence, and its deference to the Catholic Church. He emigrated to London in 1926, and that was where he ran into the famed director.

Hitch first saw Juno and the Paycock when it transferred to London after its initial Abbey run. He often went to the theatre in search of ideas and ready-made stories, and was instantly taken by O’Casey’s beautifully constructed play. He was fascinated by it, and acquired the rights. “I liked the story and the play very much, it contained a lot of humour and tragedy,” he later told his great fan and confidante François Truffaut. “I remember going over it again and again, seeing whether I could retell it in cinematic form.”

Was he attracted by its Irishness? Hitchcock had strong Irish roots, and his Catholic upbringing would provide the themes of guilt and redemption that would later recur in his work. He was probably more interested in Juno’s sublime form, but making the film would not prove easy.

Its shoot coincided with the arrival of synchronised sound, a revolution in film-making that initially thwarted the camera’s freedom to roam and bound it to clunky sound sets. Hitchcock had worked his way up from the very bottom of the British film industry, and in 1929 had established himself as an up-and-coming director.

Once Hitchcock had committed to making Juno, he sought Seán O’Casey’s blessing after being introduced to him by the writer and critic Ivor Montagu.

He invited the playwright to Elstree Studios to watch him shooting scenes for his thriller Blackmail, and see how he worked.

But as the documentary points out, O’Casey had a rather condescending attitude to cinema, which he considered a low art form in the main. It was about to pay him good money, and he got on nicely with Hitchcock at the beginning. He thought it was fun to be taken to Elstree to see “the things that astonish the people”, but he didn’t seem all that astonished himself.

A dedicated socialist, he was more impressed with Russian film-makers like Sergei Eisenstein, and might have considered the young Hitchcock a bit of a hack. Of course he was not, but like everyone else, Hitch was struggling with the transition to sound – and the shooting of Juno would provide him with many headaches.

Set in the Dublin tenements in the early 1920s, Juno and the Paycock tells the story of the grandly dysfunctional Boyle family. Juno is the put-upon mother, Captain Boyle the work-shy, boozy father who spends most of his time drinking and nattering with the loquacious wastrel Joxer while Juno and daughter Mary are out working. Their son, Johnny, was wounded in the Civil War, and things get even worse for all concerned when the Captain starts spending an inheritance that turns out to be illusory.

Hitchcock retained much of the original Abbey cast, including the great Sara Allgood, who played Juno, her estranged sister Maire O’Neill as Maisie Madigan, Kathleen O’Regan as Mary, and Sidney Morgan giving a wonderful portrayal of Joxer. Barry Fitzgerald had made the role of the Captain his own in the original Abbey production, but although he does appear in the film as a grandiloquent street narrator, the future Hollywood star was unknown in England at the time, and the producers – and possibly Hitchcock – wanted a better-known name instead.

That would turn out to be Edward Chapman, a journeyman English actor who’d later form a low comic partnership with Norman Wisdom. He did his best with the accent, but seemed lost in the all-Irish cast, and proved a weakness at the centre of the film.

If you watch Chapman attempt the “what is the stars” speech, the results are not pretty.

Seán’s wife, Eileen, would later claim that Barry Fitzgerald had failed the screen test, and that Hitchcock apparently didn’t see the star quality that would propel the actor to Hollywood’s A-list. It’s also been suggested that part of the reason for O’Casey’s unhappiness with the finished film was that he’d campaigned for Fitzgerald to get the part. But some of this may be wistful hindsight, and Sara Allgood, the film’s rather thin-skinned focus, may have been happier to play off Chapman than a potentially scene-stealing Fitzgerald. Hitchcock, meanwhile, was battling with the new restrictions of synchronised sound.

“It was a bad experience for me,” Hitchcock would later conclude, and it seems O’Casey was not thrilled by the process either. According to his daughter, Shivaun, “he was bitterly disappointed that Barry wasn’t in it, who he really admired as an actor and who he reckoned was a brilliant Boyle”.

He was even more annoyed when the film was released in America under the title The Shame of Mary Boyle, the whole point of his play being that it was Irish society, not poor pregnant Mary, that ought to have been ashamed.

Juno and the Paycock did reasonable business, but is something of an anomaly in its director’s career – and is hardly a typical Hitchcock film. It’s also a bit of a period piece, an early sound film that seems stiff and stagy, but it’s strangely watchable all the same.

And it is gold dust for anyone with a passing interest in Irish theatre, because it gives us a tantalising glimpse at how the classic Abbey productions of the 1920s might have looked, and sounded. It’s well worth watching, and so is this informative documentary.

‘When Hitchcock Met O’Casey’ will be screened at the Light House on February 21 at 6.15pm. For more information see www.diff.ie